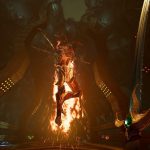 You are reading
Amid Evil Gets A Full Prequel Expansion “Soon”

If you are a fan of old school FPS’s such as Heretic, and Hexen but have not played Amid Evil. I suggest you click out of this article, go play it, and then come back. Amid Evil pays homage to the magical FPS worlds of the 90s but in a beautiful and modern way. The game was developed by Indefatigable and published by New Blood Interactive. In a new trailer today, we learned that a host of new content will be coming to the game very soon.

Amid Evil – The Black Labyrinth

In an announcement from New Blood Interactive today, it was revealed that Amid Evil would be getting a prequel expansion. The expansion is simply titled “The Black Labyrinth” and brings a host of new things to Amid Evil. New levels, new weapons, new enemies, and more will make their way to the game upon release. While currently, the game has no concrete release date at this time. But New Blood hinted that the expansion would be coming very soon.

Will you be checking out the expansion to Amid Evil? Let us know in the comments and don’t forget to check back for the latest gaming news and information.