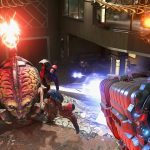 You are reading
Doom Eternal Is Coming To Xbox Game Pass

Xbox’s purchase of Zenimax Media which hosted a variety of legendary studios shook the world this week. Studios like Arkane, Bethesda, Machine Games, and ID Software just to name a few. Are now officially part of Xbox Game Studios. Which means of course, that their games will be coming to Xbox Game Pass day and date in the future. However, in a new announcement today. It appears Xbox Game Pass subscribers will be able to play Doom Eternal very soon.

In an announcement from the Xbox Game Pass Twitter account. On October 1st you will be able to download Doom Eternal as part of your Xbox Game Pass subscription. PC gamers worry not, it was also revealed that the game will be coming PC Game Pass in the future as well. With more information to be coming very soon. This is a great addition to Game Pass, especially after the acquisition of Zenimax Media. Now stop dilly-dallying, and get ready to rip and tear your way through some demons on October 1st.

Will you be checking out Doom Eternal? Let us know in the comments, and don’t forget to check back for the latest gaming news and information.

You can find our official Doom Eternal review here.