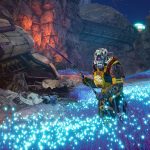 You are reading
Peril on Gorgon: The Outer Worlds DLC Review

Space capitalism has its downfalls. The never-ending movement towards profits at human expense wreaks havoc in its wake. No matter the best intentions, the means will never justify the ends. This is especially true when those means sever a hand off of its owner and mail it to their last remaining contact. That’s how Peril on Gorgon, Obsidian Entertainment and Private Division’s first expansion for 2019’s The Outer Worlds, starts. As enjoyable as the plot and the writing is, its overreliance on the base game’s positives weighs it down.

Writer’s note: I played this game as a near max-level, mainly with a stealthy and charismatic character.

Something Happened on Gorgon, Something Dark

Our story begins after players finish a quest from the core game’s story called “Radio Free Monarch” and travel to another world. Enroute to its next destination, the Unreliable and its crew get an ominous package of a human hand and a recording made by Lucky Montoya. Apparently, Montoya knew the Unreliable’s last captain, Alex Hawthorne, and his recording directs you towards an old testing facility on the asteroid, Gorgon. At first, you meet a lonely heiress named Minnie Ambrose. Minnie just wants her mother’s journal to learn what happened to the her on Gorgon. However, as you delve into the ruined labs, there’s something much bigger happening. Montoya was into something deep before losing his arm.

Peril on Gorgon Shares the Same Strengths as Its Core Game

Like the main game, the writing does the heaviest lifting for Peril on Gorgon. Its main arc is a perfect storm of unmitigated disaster, corporate cover-ups, and family secrets that pull the player from clue to clue. Without spoiling much, greater forces do their damnedest to keep the Gorgon disaster under wraps. Whatever happened on Gorgon elicits similar feelings to Chernobyl’s infamous disaster and the fall of Bioshock’s Rapture. Where The Outer Worlds showed inhumane working conditions, Peril on Gorgon reveals wildly unethical projects run amok.

Then on a smaller level, speech-centered tactics can lead to clever solutions. These solutions aren’t necessarily your skill-related dialog options, but standard options that still work. High leveled players should try these out. Finally, no great writing is complete without great dialog. Be it dry humor about corporate life, wise realizations, or practically any of the “dumb” lines, the dialog is still a core pillar of The Outer Worlds’ best feature, the writing.

Unfortunately, as well-executed as the story is, we’ve seen various parts of it before. You want humans going through inhumane treatment? Gorgon centers around it, but the Emerald Vale did it first. Well, what about somewhere nobody talks about because of how bad it is? Monarch is just as shunned, the only difference is nothing really bad actually happened there. Very well, but we haven’t seen infighting on The Board yet, right? On The Board, no, but they sure love to fight the Groundbreaker. Many parts of Gorgon’s disaster echo past Halcyon experiences so much that the line between the original story and reworked plot ideas is blurred. Sure, this story happens from a quite mysterious angle, but it’s still a story with familiar tropes.

Plots aren’t the only things reused; enemies mostly are too. Gorgon is filled with the same Marauders and robotic guards you can find on any given planet in the system. The two exceptions are slight tweaks to the asteroid’s wildlife. That’s not to criticize reusing old assets since old assets can be templates for enemy variants. However not enough new was done to feel like this area was somewhere unique. Simultaneously, the one faction the story’s Chernobyl-like disaster revolves around aren’t changed for Gorgon. Their models didn’t change from the base game, and that feels like such a missed opportunity.

Not too Visually Stunning, but Still Pretty

In general, Peril on Gorgon retains the same, nice-looking art style as the core game, but it’s not as impressive. Most locations in the Halcyon colony have some beautiful centerpiece to their skybox. Scylla, the other visitable asteroid in Halcyon, has a massive drill structure jutting into a backdrop of stars (as a matter of fact, that’s our cover picture for our review from last year). Groundbreaker has the litany of shop signs that feels like a slice of downtown living on a space ship. Gorgon has some sort of dome around the main colony that you keep debating whether it’s broken or supposed to look like that. Instead of a beautiful centerpiece anchoring the skybox, the dome feels more distracting than supporting.

Some buildings/enclosed areas do bring something new. Midway through the story, you go to a recently “vacated” facility that has an electrically charged generator on top. Further down the line, you see a chemical processing machine that dominates its room. Both devices make for nice pictures, but you’re only at each location for one mission. These pieces deserve more than one viewing, and it’s disappointing that they’re so secluded.

Enemy awareness can make or break the difficulty curve, and man does Peril on Gorgon’s awareness break it. Marauders and security bots are not routinely aware of what’s happening on Gorgon. Fights frequently extend throughout the DLC not because enemies are tough, but because they don’t realize a fight is happening in the same room they’re in unless the fight is up close. It’s one thing when enemies don’t detect you in stealth because you can build your character to be super stealthy…but how can anyone not realize a fight’s breaking out in their room? That disconnect was jarring.

Overall, Peril on Gorgon is enjoyable. At 8 hours, this is a proportionally acceptable length for an Outer Worlds add-on. All of the writing and characters that captured our imagination last year are still here. On that same note, retreaded tropes weigh the overall experience down. You might not take as many screenshots as last year, but the general art style is still there. If you do find fights to be easier, check your room for an unaware peanut gallery. Even if the total package feels a step-down, it’s still a worthwhile purchase.