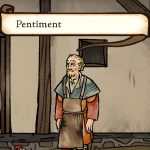 You are reading
Pentiment Review – Only Murders in the Abbey

Pentiment is a historical adventure game from seasoned game designer Josh Sawyer and a small team from Obsidian Entertainment. The game tells a tale of a murder that engulfs a small Bavarian town in the Alps and its nearby abbey. Despite leaving a mixed first impression and some quality-of-life issues, Pentiment is propped up nicely with a strong narrative and presentation to match its historical era.

At its core, Pentiment is about a town and its abbey. The quiet Bavarian town of Tassing and its adjacent abbey in Kiersau are the main stars of the game. The entire game takes place within the boundaries of these premises.

Pentiment takes place during a tumultuous time in European history, during the onset of the Reformation movement. The teachings of Martin Luther are making their way around the continent, creating a seismic split within the Catholic church. That, along with the advent of the printing press, has resulted in the dissemination of information on a scale unseen before. This of course ties in nicely with the ideas spurred by Luther and the Reformation movement.

Players assume the role of Andreas, an up-and-coming artist commissioned by the Kiersau Abbey to illustrate a manuscript. During his stay, Andreas has grown close to the people of Tassing and the monks and nuns of Kiersau abbey.

Only Murder in the Abbey

One day, Baron Lorenz Vonrothgel, the lord who commissioned the manuscript that Andreas is working on, shows up in town. He’s there to check up on the manuscript and to deliver a book to the head of the abbey. However, Lorenz’s visit is cut short as he is brutally murdered in Kiersau. One of the older and more docile monks happened to stumble on the baron’s corpse and is immediately accused of the murder. This spurs Andreas into action as he tries to prove the monk’s innocence. 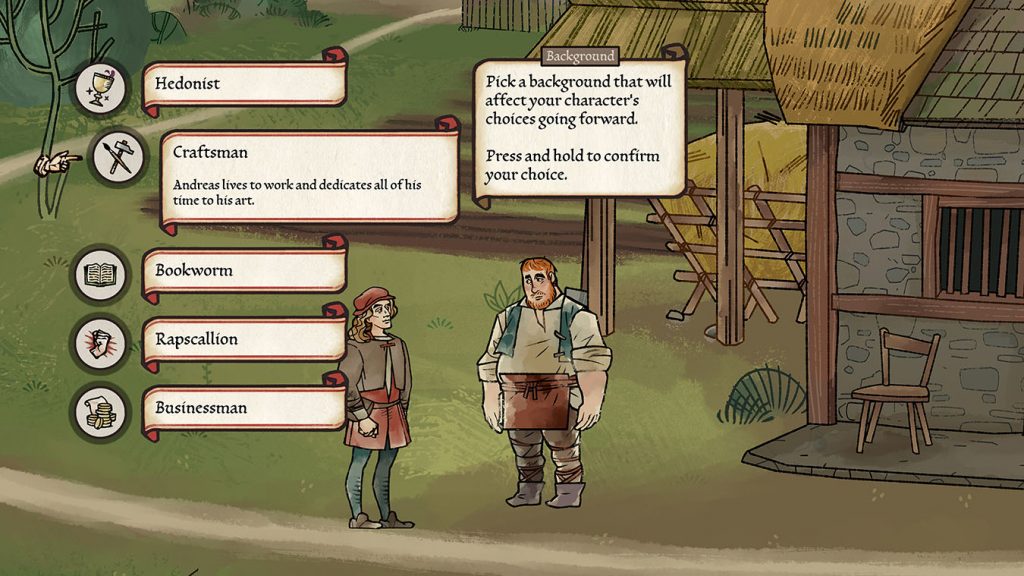 Much of the gameplay loop involves traveling around town to undercover the truth surrounding the murder mystery. Andreas will go about interviewing and dining with the townsfolk, monks, nuns, and priests to unravel who killed Baron Lorenz Vonrothgel.

Periodically, the game will throw very simple puzzles/mini-games to help break up the game’s flow. Unfortunately, these activities were few and far apart. Despite their simplicity, I typically enjoyed these segments.

As expected, players will collect evidence and make their case to pin the murder on the real culprit. However, during the investigation, Andreas finds mysterious threatening notes left behind for him to find. He learns of a deeper and darker conspiracy that looms like a dark cloud over Tassing and Kiersau.

A Deeper Conspiracy and Pacing Stumbled Towards the End

The way this conspiracy unraveled was nothing short of brilliant, and kept me on my toes for nearly my entire playthrough. It was a surprisingly long playthrough at that, clocking in at almost 20 hours.

The mystery unfolds brilliantly at every turn. I was absolutely shocked by the time the narrative concluded and was thoroughly satisfied. It is a testament to the skill of the storytellers at Obsidian that they can weave equally compelling narratives regardless of the size and scope of their games.

My only gripe is in the first half of the final Act 3. While the rest of the game had excellent pacing, the investigation near the end really dragged. Players are tasked to interview multiple characters to get their takes on key events that took place in Tassing. You literally interview around nine characters of your choosing, but the whole segment felt padded and the payoff was not worth it. In the end, the same choices were going to be made available to you regardless of who you interviewed. 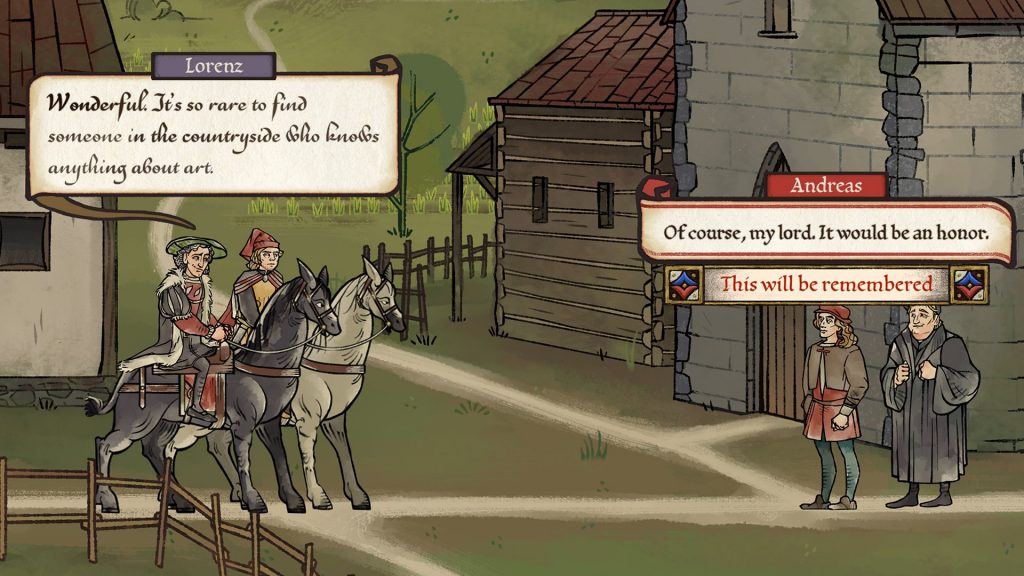 The game does something quite unique in terms of its presentation. The game provides you with two text readability options. One where different classes (i.e., peasants, nobles, monks) have unique fonts that may be more difficult to read at first. Or, if you fancy, a more legible font with less distinction. I highly suggest choosing the first option as the text itself provides a lot of personality, emotions, and characterization.

For instance, if a character was angry, the text would shake and there would be ink blots to depict that anger. Or if someone was insulting another character in a low voice, the text size would appear smaller. It’s this finer attention to detail that help deliver emotions to a text-heavy game with no voice acting. So kudos to Obsidian for smartly pulling it off. 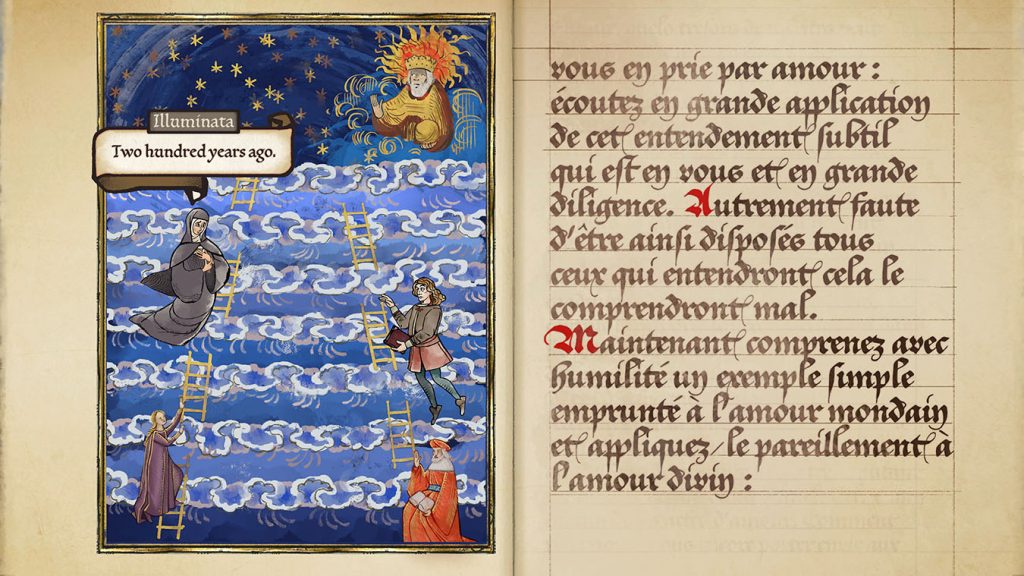 Simply put, Pentiment wants to immerse players in the historical setting. It really pulls off the feeling of looking at 16th art. Everything from the font to the painted color scheme sells itself to the style. Moving locales by flipping the pages of the book is a particularly nice touch. The manuscript illustration art style meant that animations were quite limited and simple. Yet, I was surprised that the characters had a variety of facial animations. Which again, lent itself well to elevate emotional delivery. The style may not work for everyone, but it grew on me fast.

I reviewed the game on the Xbox Series X and did not notice any noticeable frame drops. Initially, I did run into some screen blinking very early on in the game, but they quickly disappeared. On the audio side, the score was sparse, but when it did kick in, it added a lot to the scene. Most of the soundtrack reflected the time period’s music, which suited the visual aesthetic of Pentiment.

The game’s UI has some real navigation problems.  The journal that keeps track of Andreas’s progression, main quest, and side quests quickly becomes cluttered and can be difficult to follow at first.

During the early portion of the games, I often had to speak to specific characters but had no idea where to find them. Hunting them down felt like a poor use play time.

Additionally, the side quests were not the most intuitive to complete as well. The map showed which general location you are currently in, but there were no indicators on how to go about completing side quests. At first, I was could progress by dumb luck, but later on, I knew where every character spent their time, given they didn’t go to other locations that is. Luckily, characters did not move around too much, and you can usually deduce where to find persons of interest with a quick conversation with one of their acquaintances.

I was disappointed to learn that when the baron was murdered, there was an entire suspect I could have tracked and investigated but completely missed because I was still learning the ins and out of Pentiment. The game could have done a better job of onboarding new players to these mechanics. However, it was a slight nuisance that luckily died down the more I played the game. 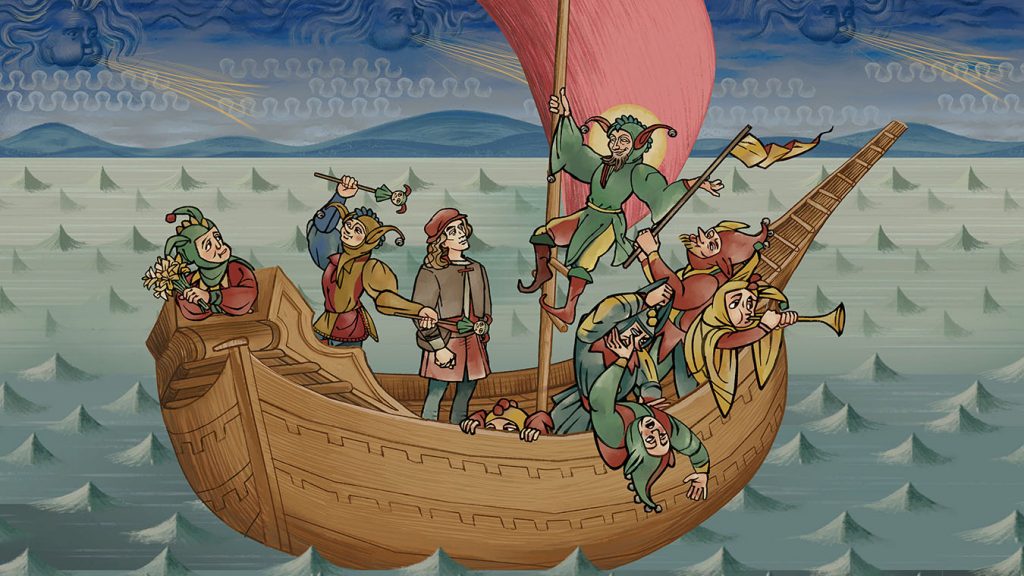 Since the game is all about dialogue and dialogue choices, I felt the choice aspect was a hit-and-miss affair. I loved how players are free to choose Andreas’ educational background and personality traits to open more dialogue options.

At the same time, I felt at some points it didn’t matter what dialogue choice you made, as either option resulted in the same conversations or consequences.

To add, Pentiment did not do a good job explaining how to successfully convince/change the mind of characters you are conversing with. You just get a note that a character will remember your dialogue choice and that’s it. It felt half-baked, and I just did not grasp how to influence characters when the situation arose.

Towards the end of the game, the major decisions you selected should have reverberated more strongly with the folks in Tassing and Kiersau. But alas, these decisions sort of just went over the head of the characters with little reaction from them. I felt it was slightly disconnecting from the narrative and themes Pentiment is trying to convey. Themes such as faith/belief, kinship, and preserving history.

Pentiment did not give off the best first impression. But the more I played, the more I was engulfed with the game’s layered narrative filled with mysteries and intrigue. Dialogue choices were well realized, but the consequences didn’t garner the expected reactions. Despite being off-putting at first, the game’s visual and audio presentations complement its 16th-century art style well. Although the game’s limited scope is quickly apparent, Pentiment’s narrative design has a lot to offer and is another feather in the cap of Obsidian’s story-telling credentials.

Update – Obsidian just released a patch to address minor fixes including the final localization polish. Players can now download this update on Xbox Series X|S, Xbox One, or PC via Windows 10/11 and Steam.

Note – A key was provided for the purpose of this review.