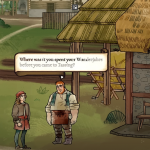 You are reading
5 Hidden Gems Of The Xbox Showcase

While opinions of Xbox’s 2022 showcase may vary, there were undoubtedly some big IP reveals packed with gameplay. Games like Starfield, Diablo IV, and Redfall certainly stole the show with great showings. There were also other titles that may have sneaked under some people’s radars or gotten lost in the mix between the big announcements. Here are 5 games that you should keep on your radar in the next 12 months on Xbox and PC.

I have a soft spot for fantasy action RPGs. Especially when they dial in a unique setting and with a heavy focus on combat. Flintlock: Siege Of Dawn from developers A44 Games looks like a perfect blend of this. You may remember A44 Games for their Soulslike RPG Ashen which was released back in 2019. That game was filled with darkness and hard-cutting lines. However, they have done away with that style and embraced a beautiful and colorful open world with Flintlock.

Perhaps the most eyecatching aspect of the trailer is how seamless the combat flows. The transition between melee combat, magic, and blunderbuss blasts is eyecatching. In the trailer, they tease a massive knight-style boss that the lead character brilliantly executes. While there are plenty of action RPGs fighting for our attention (Yes I am looking at you Forspoken) Flintlock has shot up my list of anticipated games. Set to release in early access in early 2023 on PC and Xbox, here is hoping that A44 Games can deliver on this impressive trailer.

Obsidian is undoubtedly one of the most genre-diverse studios within Xbox’s first-party studios. From the upcoming Avowed, a first-person RPG set in the Pillars Of Eternity universe. To the “Honey, I Shrunk The Kids” survival gameplay of Grounded. Obsidian has proven time and time again that they are thinking outside the box with their games. This is no different from the newly unveiled Pentiment, a side-scrolling RPG with a 16th-century art style. Pentiment is directed by Josh Sawyer who was one of the creative leads on games like Fallout: New Vegas and the Pillars Of Eternity series. Focusing on a strong narrative mixed with puzzles, dialogue, and decisions galore it truly doesn’t look like any game we have seen recently.

With the leadership of Sawyer combined with the talent already within Obsidian, it is quite easy to get excited for Pentiment. With the added bonus that the game is set to release this November on Xbox Series consoles and PC. If you are a fan of story-focused adventures like Disco Elysium, it feels like Pentiment might be a must-play for many RPG fans, and was a major highlight of the Xbox Showcase for me.

The trailer’s big focus is that both Amicia and Hugo are a little older after the harrowing adventures of the first game. It appears that both characters have learned a few new tricks. The reveal trailer highlighted a lot of high-impact combat. From pushing soldiers to their deaths into piles of rats to Last Of Us-style vicious takedowns. It is clear that Amicia has had to become more aggressive in order to defend Hugo. However, Hugo isn’t defenseless either with a host of powers related to the plague rats surrounding the French countryside. Without a doubt, A Plague Tale: Requiem will be one of the best titles set to release this year.

The Last Case Of Benedict Fox

There is an overabundance of Metroidvania Indie titles. So many are released on what feels like an almost weekly basis. They often have a tendency to blend together and become forgettable. However, during the Xbox showcase, one Metroidvania managed to stand out in a big way and that was The Last Case of Benedict Fox from developers Plot Twist.

The game is centered around a detective who has ties to a demon companion, that allows him to travel into the minds of the dead. With a focus on delivering a rich gothic story, mixed with a stylistic and dark art direction. The combat looks unique as well with a blend of weapons and powers that you will have at your disposal. All of these weapons will be necessary in order to beat some of the terrifying monsters featured in the reveal trailer. It feels like very few games want to tap into gothic and Lovecraftian monstrosities. But, personally, I am all in on this dark and mysterious setting. The title is set to release in Spring 2023.

Have you ever wondered what would happen if combined Doom with Rick and Morty? You probably haven’t unless you have consumed a lot of edibles while binge-watching Adult Swim. But Squanch Games had this vision and arriving later this year High On Life is quite a mold-breaking FPS. From the co-creator of Rick and Morty High On Life is filled with sentient guns, colorful enemies, and alien gore galore.

High On Life was a strong kickoff after Redfall during the showcase and struck a stark contrast with its vibrant colors and fast-paced action. While dialing in the outrageous humor that we have come to love from Rick and Morty. If you played Squanch Games’ previous game Trover Saves The Universe, you know what to expect with High On Life, and it is a great addition to the Xbox Game Pass lineup when it launches this October.

What game stood out for you at the Xbox Game Showcase? Let us know in the comments and don’t forget to check back for the latest gaming news and information.