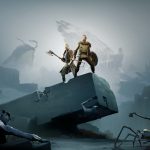 You are reading
The Ashen Broken Multiplayer Fiasco 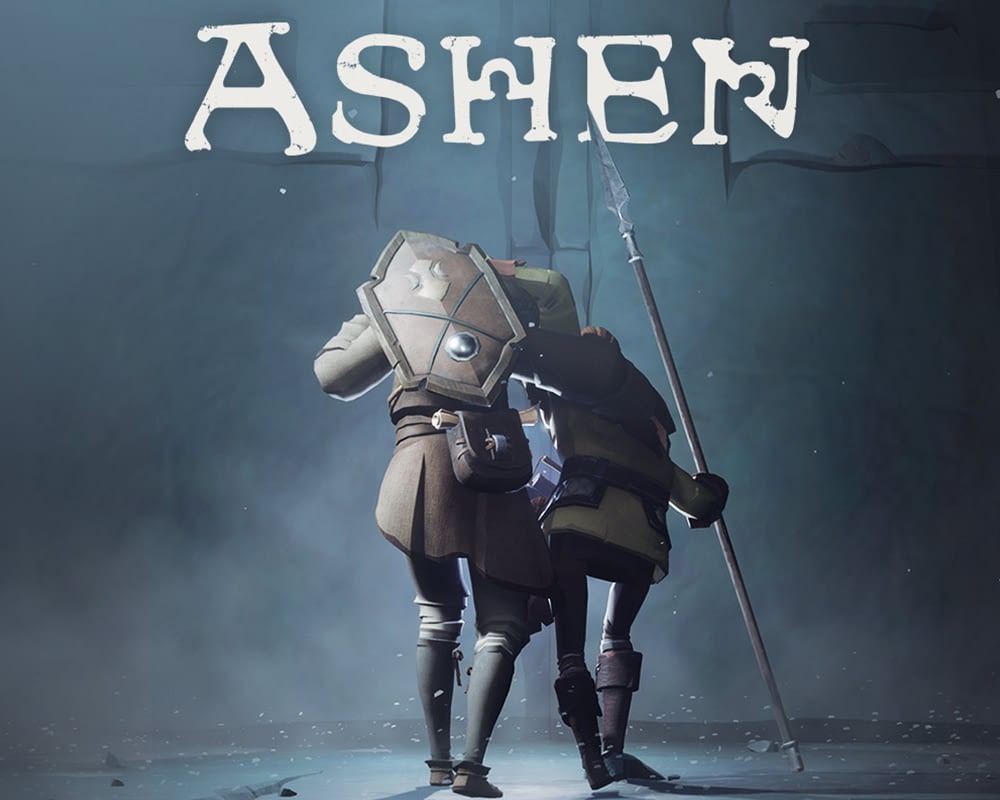 Ashen is a 3rd person action-adventure game that takes inspiration from the souls-like genre. Alongside the normal gameplay found in the genre, it features a unique take on the Souls-like multiplayer function. In the game, you will always have an NPC companion to fight alongside you. Where Ashen modifies its multiplayer function is by allowing players online to take control of that companion. To do so, both players must be online and if players want to play with a buddy, they must take an extra step. As listed by the tips page on the official Xbox Blog:

You’ll want to set a Multiplayer Filter Code to share with your friend, so come up with a six-digit number and pass that along to your buddy who will then need to input the same code on their game. Make sure you both have Use Multiplayer Filter and Disable AI Companion checked. Then be near each other at the same point in the game world, tap Up on the d-pad and Ashen will (after 30 seconds or so) pair you up to embark on your adventure together.

It’s already a bit complicated, but an ambitious idea to ensure players who have finished the game can’t carry their buddy and solo players will at least have some backup on the journey ahead. It keeps things fair, in a sense. However, this is where an equally unique problem pops up for Ashen. Where the game since June 19th, 2020, has been experiencing issues with its multiplayer. Most notably, on PC via the Epic Games Store. Where players have not been able to use this function, and have not gotten a proper fix from Ashen’s developer A44 Games.

Below will be a fairly accurate timeline of this issue, as provided by members of the game’s community.

All records of the issue will be related to the game developer’s Discord channel. Where the developers have responded to inquiries over the presented timeline.

The first time the issue was presented was on the date listed above, June 19, 2020. Which was met with deafening silence from anyone on the developer team or moderators. It wasn’t until it was brought to attention two additional times that a response from channel moderator Steven G. acknowledged the reports on December 8th, 2020. This is nearly six months after the first issue was reported. 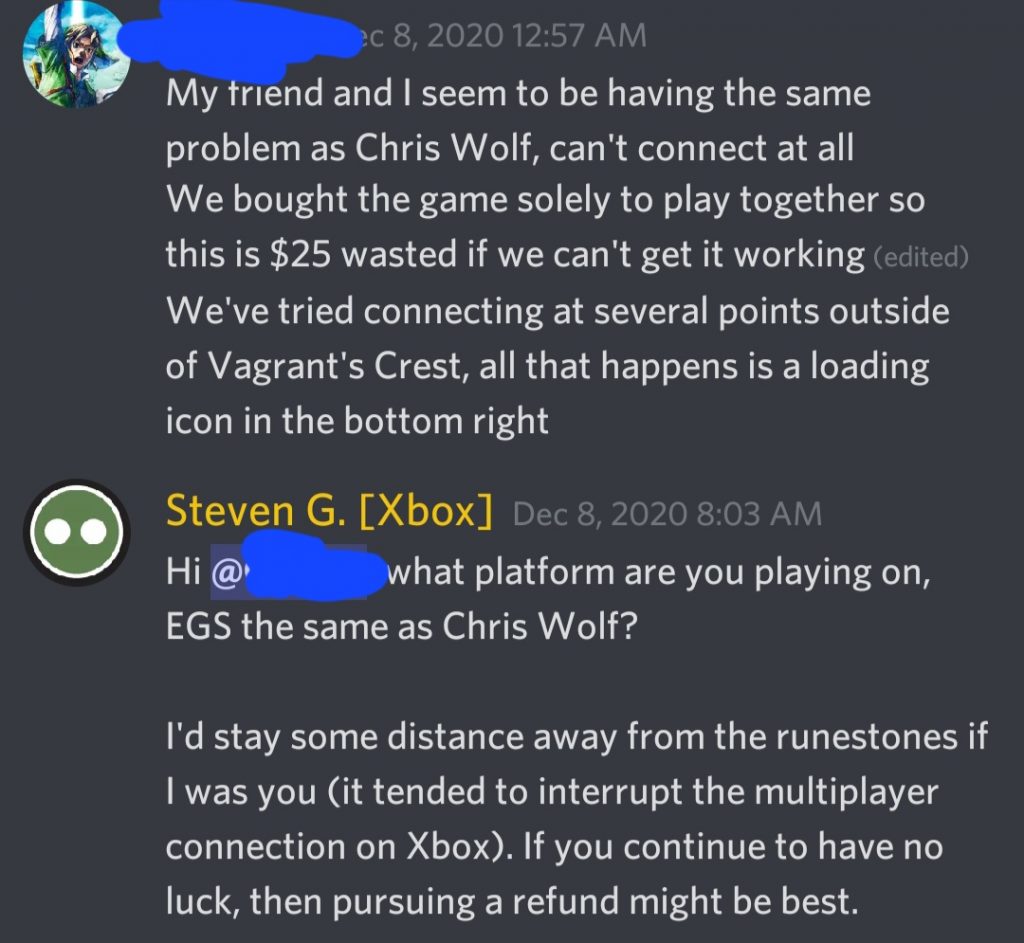 There was no resolution for this issue at that time. So, on June 4th, 2021, the first response from anyone on the development team was provided. Until then, players would have to sadly wait with patience.

The response from developer “Derek” was:

Hey folks, we are testing and looking into multiplayer issues on our end.

More silence would come until June 15th, where Derek returned with:

So far we have only been able to find issues on the Epic Games Store multiplayer, and are looking into these.

With a return on June 28th, confirming this issue is still being investigated. Until he informed players on July 14th, that the multiplayer should be functional. However, it wasn’t, and on August 11th, Derek confirmed that the investigation and the issue remained unresolved. It was after this point that familiarly players would have to remain patient until November 18th, when Derek informs players that all platforms aside from the PlayStation platform are functioning.

The final update from Derek arrived just recently on the 20th of this month. The news that he brought wasn’t so joyful, however. The developer informed players that they would have to contact their publisher Annapurna Interactive about the issue as “they are in control of how it is sold”. Meaning that they are presumably done investigating the issue unless they are permitted to continue doing so. An issue that started in June of 2020, has to this day not been resolved. So what happened?

I cannot confirm what the direct issue is as the developers have not publicly stated what is wrong with the Epic Games Store version. However, no one else has been able to get any direct answers. Me included, as all attempts to reach A44 and Annapurna Interactive across all social media platforms and email are met with silence. This includes members of the developer Discord. Even attempts to get refunds for the game as a core function is not working has been met with failure. As the Epic Games Store has a limit of 2 hours of playtime before you are unable to qualify for a refund. Similar to Steam. 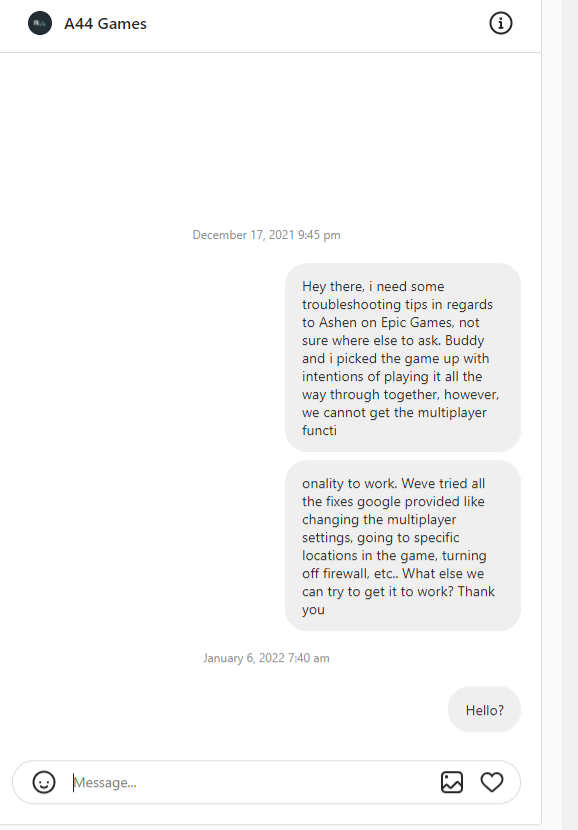 Screenshot provided to show no response from the developers.

This has rightfully upset players that have reached the point where this feature unlocks, around the 2-hour mark. Even more so, there is no warning of this feature not working on the store page. This creates yet another big issue.

Why The Epic Games Store Version?

To go over the platforms where Ashen’s multiplayer works:

So why did this issue appear on the Epic Games Store only and what exactly is causing the problem on the platform? The developers appear to only be having a problem with just that version. Yet, still have failed to notify players of any direct reason behind it. Players have rightfully reached out to support from Epic Games with interesting results. Where one player stated the following:

They will deactivate your account if you do a chargeback, even though after talking to Paypal, this case would warrant a refund. Epic Games refuses to comment what they do for the consumer in the event that a game is broken/faulty/falsely advertised. Epic Games refuses to comment on how long I am to wait to get a hold of the A44/Annupurna before they step in and do anything.

Another player provided me a screenshot from interaction with support:

We understand you wanted to report something about the game. Please be informed that we aren’t able to do anything about this since this is the developers choice. Please reach out to them for more information about this.

Showing some clear-cut problems with this situation in its entirety:

Currently, the page for Ashen does not warn players about the potential of this feature not working and most players will not go out of their way to check and see if a specific feature is not working prior to purchase.

A44 is a relatively small and young studio. Ashen is their first and only game currently. However, this issue tarnishes that image as players cannot enjoy it fully on one of PC’s platforms. The fact the store page doesn’t warn players that a core feature of the game isn’t working also tarnishes that image. It’s a shame that the developers are either not equipped to fix the issue itself or that it is being caused by something out of their control. Regardless, leaving players in the dark for long periods of time with no guarantee of fixing the issue is the biggest shame of all here.

I would like to thank Discord users: “Joshua W”, “Hector”, “Amenion”, and “Puncode” for providing the info on this situation. There is probably a mountain of other information that could be found in the Ashen subreddit. But that is a journey I dare not embark on right now.

Please do not attack the developers, the publishers, or any and all specific person that has been name-dropped. Also please do not spam the developers on any social media platforms. The point of this article is to bring light of the issue to our readers.

For less than 4 weeks, there have been no updates regarding the issue from any of the developers at A44. However, on the 15th, one of the admins on the Annapurna Interactive discord channel, “Nathan” relayed to concerned players on the 15th:

We’re working with A44 to resolve this EGS MP issue. No ETA but as soon as we have one we’ll share.

Splendid news, but this could be another ride on the merry-go-round like before. Fortunately, this was not the case, as players have been reporting consistent success with the Epic Games Store’s version of Ashen’s multiplayer. Admin “Jon” responded to a player asking for details about what caused it and provided a detailed response.

As Jon stated, this issue is still being investigated, but to players who have been testing the Epic Games Store’s version, it appears to be working properly. For those affected by the issue for so long, it is also refreshing to finally know what the issue was and how it’s being fixed. I would like to formally thank Nathan and Jon for responding to their community and putting to rest this long-standing issue.