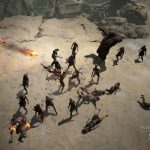 There is a wealth of new game reveals and details that have been announced during today’s Xbox and Bethesda Game Showcase. Among the announcements comes a new look at Diablo IV.

The trailer showcases the game’s fifth and final class the Necromancer. With that, the latest trailer gives us a new look at story elements. The team went on to add additional Xbox Series X gameplay. The gameplay gave us a look at a new dungeon, which the team promises there will be over 150 of in the game. Along with the gameplay came the news of couch co-op and cross-play.

We already know Diablo IV will be launching sometime in 2023. For players eagerly awaiting you can sign up here for the beta. At this point, it is fairly obvious the game will one day be coming to Xbox Game Pass. Unfortunately, we will have to wait a little longer to hear about when it will be officially released.