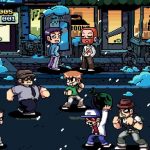 You are reading
Scott Pilgrim vs The World: The Game Returns

Scott Pilgrim vs The World was an incredible movie from back in 2010 based on graphic novels by Bryan O’Malley. It instantly gained a cult following after its release, also because of the time period it was released in. There was of course a tie in video game. However, unlike a lot of games during this era, it was surprisingly good. Featuring crisp and funny side-scrolling beat-em-up action the game was loved by many. However, due to licensing issues the game was pulled from both Xbox Live Arcade and PSN back in 2014. Now it appears the game will be coming back.

Announced during today’s Ubisoft Forward stream. Scott Pilgrim vs The World: The Game Complete Edition will be coming Holiday 2020. It will be coming to the Xbox One, PlayStation 4, Nintendo Switch, Google Stadia, and PC. The complete edition will also feature the DLC content of Knives Chau and Wallace Wells. We will no doubt be hearing more about this game’s release date in the coming weeks.

Scott Pilgrim vs The World: The Game Complete Edition Trailer

ABOUT SCOTT PILGRIM VS. THE WORLD Rediscover the beloved 2D arcade-style beat’em up inspired by the iconic comic book series and movie Scott Pilgrim vs. The World in this Complete Edition! Play as your favorite characters – Scott Pilgrim, Ramona Flowers, Knives Chau, Stephen Stills, and more. Team up with 3 of your friends as you battle your way through waves of tough enemies to defeat the League of Evil Exes!