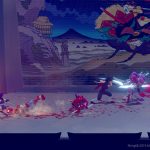 You are reading
Shing! First Impressions

Shing! is the latest in a series of retro-style beat ’em ups to make its way out this year after Battletoads and Streets of Rage 4. While those games benefited from the nostalgia factor, Shing! sets off to blaze its own trail. With a slickly produced art style and fist-pumping soundtrack, it makes quite the first impression.

The meat of a beat ’em up is the gameplay. Initially, playing with a controller on PC frustrated me. The right thumbstick controls the game’s angular combo system. It’s more akin to a sports game rather than a traditional brawler or fighting game. Trying to get my movement and attacks lined up on a stick in the way that I wanted them too just never clicked. The barebones tutorial involves a single frame showing three combos and then allowing you to hit a stick for about twenty seconds before sending you off to the races.

I quite accidentally switched to mouse and keyboard by trying out the same system coop feature, which allows for drop-in drop-out on one machine. So, I dropped out my controller and played the remainder of the time with a mouse and keyboard. I’m very glad I did. The fighting system works much much better with mouse control though our streamer had an easier time of it with a controller, so your mileage may vary.

I Get Knocked Down

Like Battletoads, Shing! allows you to switch characters on the fly. Each one has a unique weapon with its own range, combos, and attack speed. It is a solid formula and allows for rapid changes in combat style. Once I got the hang of the air juggling and combo system with the mouse it worked quite smoothly. It was a bold decision to abandon the traditional button combo system that most games use, and it paid off. You have a lot of fine control over high, mid, and low hits.  Likewise, juggling is really easy and smooth to do. However, the combat struggles from a lack of player move canceling. This really hurts when the block window is so tight.

For projectile attacks, you can’t hold block down to prevent taking damage. Instead, you can only time a perfect block to deflect the projectile. In the middle of combos, this is exceedingly frustrating since a fair number of projectile attacks send you sprawling. The knockdown animations don’t render your character invulnerable and take an eternity to rise from. As a result, you will frequently die when you get knocked down. The amount of health your reserve characters have at any given moment is shown on screen but can’t be increased through time. Only by being an active player. So you can’t cycle through characters in order to always have someone fresh.

There’s little chance to fight effectively when you’re surrounded by enemies. You have to immediately dash or jump out of there or you will die. The unlockable bomb drops make this immeasurably easier, so perhaps later unlocks will help with this. The boss fights are interesting and not straight forward which is much appreciated. The first fight alone features two different puzzle mechanics. These flashes of gameplay brilliance are what has kept me playing despite the extremely offputting characters. 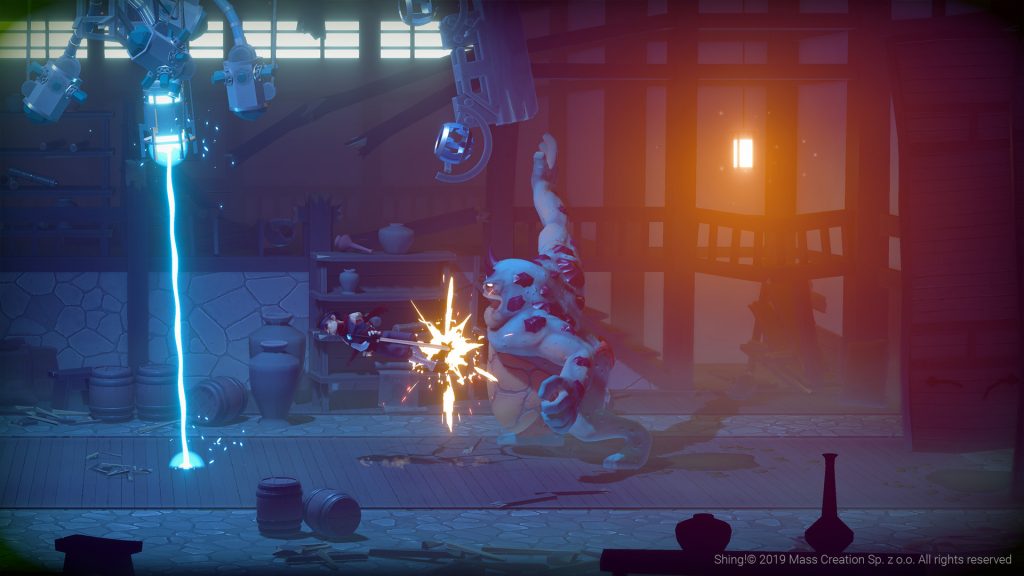 Shing! and a Miss

The story in a beat ’em up is never the appeal of the genre, so spending time delving into the McGuffin seems a bit futile. Meanwhile, the characters are everything. Whether it is the attitude of the Battletoads and the Teenage Mutant Ninja Turtles or the crime busters of Streets of Rage these games thrive on fun and zany characters. Shing! traded in clever for douchey and slightly misogynist in the case of one of its four leads. Everything that comes out of Tetsuo’s mouth is no doubt meant to be irreverent. But it comes across as extremely childish. The strict head of the city guard and one of the female leads is named ‘Bichiko’ pronounced as it sounds. The writing isn’t clever; it’s cringeworthy.

The art style is slickly produced and the cartooning is really quite good. They went for an art style, and they committed to it. Everything looks great, like a storybook brought to life. The sound design is impeccable and the titular Shing! is immensely satisfying. The enemy Yokai are visually distinct in such a way that you always know what the enemy type is and how to dispatch them. The game does an excellent job of always letting you visually know what is happening.

Shing! is a tale of two games. A fun, gorgeous side-scrolling beat ’em up, marred by some questionable decisions surrounding the game. It is truly a renaissance age of the beat ’em up, and Shing! is one more to add to the stack. Shing! is out now on Steam.