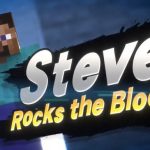 There is no arguing that the lead up to a new character event in Super Smash Bros Ultimate is an event. It is almost a guarantee that the community will explode in controversy over whoever the next character is. After endless rumors, we have finally have the answer. It looks like Super Smash Bros will teaming up with Minecraft in one of the biggest brand crossovers in recent memory. With the exception of maybe the massive Marvel and Fortnite crossover.

Today, in an official Nintendo Livestream, they revealed that Steve would be joining the battle. Players will also be able to alternate between three other Minecraft characters. You will be able to swap Steve with Alex, Enderman, or a Zombie. While we have no official details on Steves moves and kit, you will not have to wait long to find out. There is a live stream set to go live on October 3rd at 10:30 am EST. This live stream will detail what players can expect to see from the Minecraft building character. Steve marks the 2nd character in the second Fighters Pass of Super Smash Bros Ultimate. There are 4 fighters still set to be revealed in the coming months as part of the Fighters Pass. Who knows who could join the battle next? Doom guy? Master Chief?

Steve and Alex from @Minecraft are joining the #SmashBrosUltimate roster! Get ready to mine and craft your victories on the battlefield! pic.twitter.com/CtBNfENjEE

Who would you like to see added to the Super Smash Bros Ultimate roster? Let us know in the comments and don’t forget to check back for the latest gaming news and information.