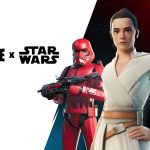 Every fan of Star Wars knows what that May 4th has a special place in their hearts. Fortnite has just announced in honor of May the 4th a few character skins have returned to the games store. If you missed out on collecting  Rey, Kylo Ren, or Sith Troopers, take a look at the in-game store.

Fulfill your destiny.#StarWarsDay is almost here and the Rey, Kylo Ren and Sith Trooper Outfits are back in the Shop! pic.twitter.com/YXC2DMuO6O

The skins are not the only thing that is available to purchase. Players can buy the starfighters pack that includes the First Order Tie Fighter and Y-Wing. Harvesting tools are also available to buy in a pack. Or course players will be able to buy all of these items separately if they already own a few of them.

These skins were apart of the celebration that happened last year when Star Wars: Rise of Skywalker was released. Remember when you could fight with those lightsabers? I really think that those should have been kept in Fortnite, more people would have stayed and played. Epic hasn’t announced if those items will be available to use in the game on Monday. Actually so far all that was announced is the items for sale. Hopefully, we will see some kind of Star Wars related quests on Monday.

Did you see that Streets of Rage 4 is available on the Xbox Game Pass? Don’t know if you should lose some of your console’s memory to this game? Well, check out our review.