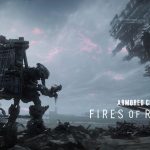 You are reading
The Game Awards 2022: Armored Core VI Fires of Rubicon

The Game Awards are back. A one-night-only celebration of all things gaming live from the Microsoft Theater in downtown Los Angeles. Today December 8th, the best games from the year will be recognized and a ton of game announcements will be made. With that, we have a new look a brand new Armored Core title from FromSoftware. Armored Core VI Fires of Rubicon will launch on PlayStation, Xbox, and PC in 2023.

It has been long rumored that Armored Core would follow up Elden Ring, but now that appears to be the case. The trailer is entirely cinematic but it shows dark tones and themes similar to Elden Ring. The last mainline Armored Core game was released in 2012. It is going to be interesting to see how the series will evolve. In the meantime check out the trailer below.

From the Press Release

After a long silence, the latest numbered title in the series is finally here. Completely new mecha action “ARMORED CORE VI FIRES OF RUBICON” Manipulate your own original mecha that you have assembled, and freely run around three-dimensional stages with slow and steady three-dimensional maneuvers. I can. In addition, you can enjoy a variety of actions that can only be realized with mecha, such as challenging difficult situations and overwhelming enemies with dynamic movements that make full use of shooting and close combat. Scheduled to be released in 2023 Supported platforms: PlayStation 5, PlayStation 4, Xbox Series X|S, Xbox One, Steam.