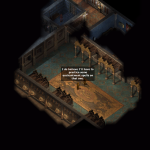 Across the entire history of gaming, there has not been a more interesting genre than RPG’s. From the earliest versions of the genre from the likes of Dragonstomper back on the Atari 2600 in the 1980s. All the way to modern masterpieces like The Witcher 3, and Divinity Original Sin 2. However, in my personal opinion, the 2000s contained some of the best RPG’s that we have ever seen. This was an era where BioWare became the RPG juggernaut we came to know. As well as Bethesda Softworks pushing the boundaries of the size of worlds that we could build and play in. However, there was always one RPG from that era that stuck with me as the years go on. That game is Baldur’s Gate II: Shadows Of Amn.

Baldur’s Gate II: Shadow Of Amn released on September 21, 2000. The game was developed by Black Isle Studio, and BioWare, and remains one of my all-time favorite games of all time. With the recent release of Baldur’s Gate III into early access. Many people are becoming acquainted with the series for the first time, and I have heard one question consistently the past few months. Is it worth going back and playing the previous games in 2020? I absolutely think that Baldur’s Gate II is a timeless game, and here are several reasons I think that people should absolutely play the game in 2020. 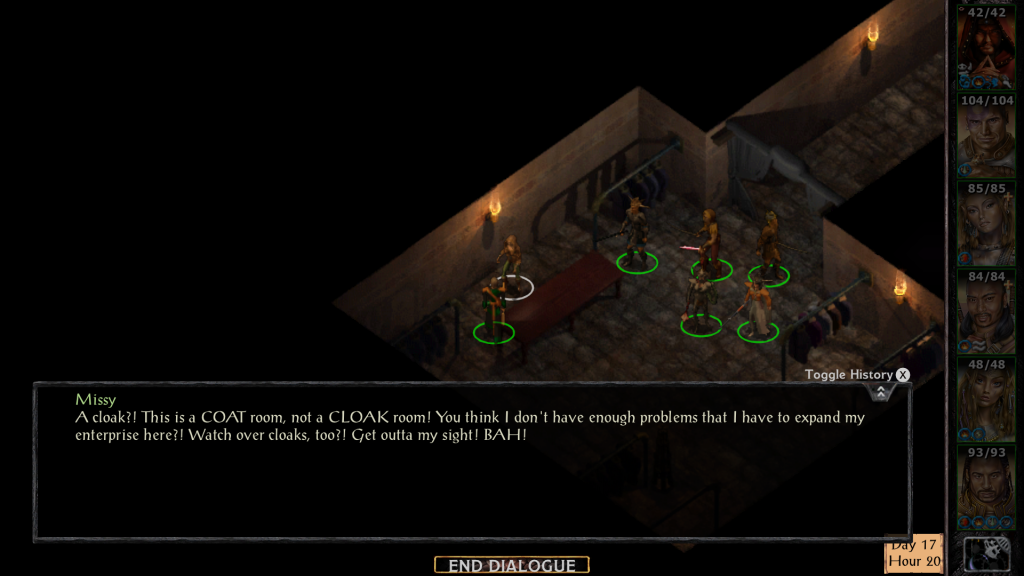 Something many RPG fans applauded the Witcher 3 for was the sheer variety of side quests available in the game. But more importantly how many of them felt like they were an important aspect of shaping the world around the player. Every time you went on a quest a Gerald you felt like the quest had either importance to your story or an interesting enough subplot for it to be worth your time. This is one of the most brilliant parts about Baldur’s Gate II and its quests can have a lasting impact on your character and your party. While there are a wide variety of serious and dark quests that make up Baldur’s Gate II. From hunting down a serial murderer/skinner to disbanding groups of slavers who traffic child slaves.

Though on this flipside of this you will find quests and stories that show the beauty of the world. An example of one such quest is in a location called Umar Hills. The village has been overtaken by a mysterious creature that has been slaughtering townspeople in their homes. When you set out to find the source of the madness, you happen across a dark temple taken over by darkness itself. Which then a long and hard-fought quest has you fight a massive dragon as well as a shadow lord in order to restore the natural order. This brings a shining light to the area again, the village feels alive again, and more quests become available. The world environment itself is changed by your actions and fueled by your decisions. This is an incredible feat for a game released 20 years ago.

The Party You Choose Crafts Your Experience 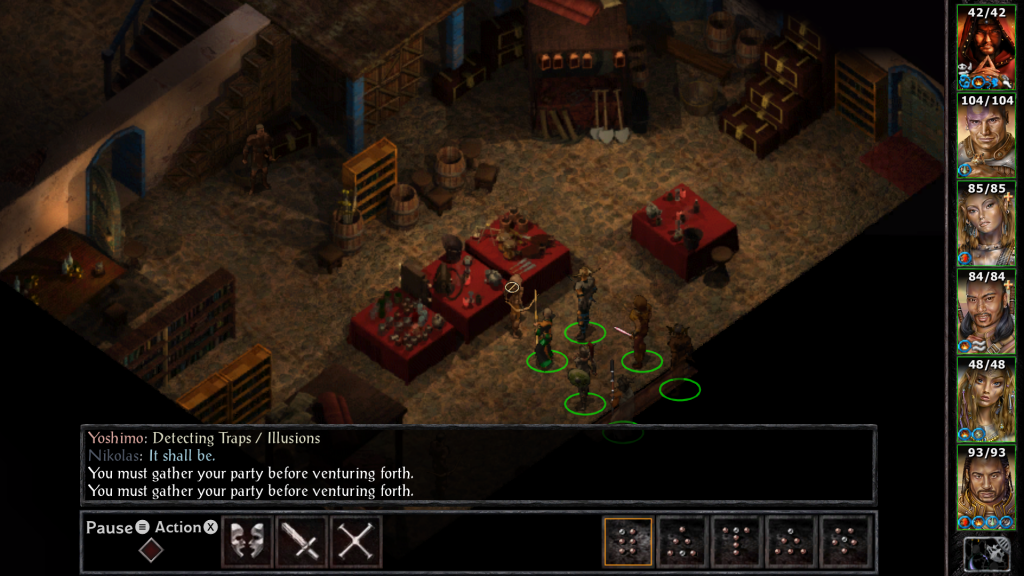 With the D&D basis for Baldur’s Gate II, one of the biggest focuses is building your party. There are many aspects you have to consider when you pick your party. What type of character are you looking to portray? A valiant knight with a heart of gold, who wants nothing more than to do what’s right. Or are you an evil mage who focuses on building your fortune of wealth, knowledge, and power?  These first decisions will shape the type of party that you will be able to surround yourself with. Each character that can join your party has their own moral system that you have to either cater to or respect. This means if you have a holy paladin in your midst if you end a quest in a particularly evil way they will likely leave your party. While evil-aligned characters will quickly tire of your “goody two shoe antics”.

Certain party members may not even get along in certain situations, no matter what quest or decisions you are making. Much like people in the very real world around us, some characters simply will hate each other. This can lead to simple squabbles and verbal altercations while being able to absolutely blow up into brawls. Even now in 2020, so few RPGs do this good of a job developing the characters that you surround yourself with. Making morally complex characters and creating interactions and chemistry based on the player’s decisions, and conversational interactions are groundbreaking for its time. It’s very rare in an RPG where the evil path feels as tempting as the “lawful good” alignment.

A World Filled To The Brim With Character

If you think I am done explaining why the story and characters are some of the best in gaming, I am not even done. The interactions and characters you meet along your journey are timeless, whether it be for their sinister nature, or simply the sheer hilarity of their writing. This even extends to the most evil of characters, Baldur’s Gate II holds no punches in its humor. There is a particular interaction with a band of pirates who are fighting amongst themselves. Which if you initiate dialogue with a particular set, they just say “arrggh” several times before they proceed to chop each other to pieces. There are even interactions with the game’s dark and mysterious villain Irenicus who is a deadly mage, in every sense of the word. With specific characters in your party, they may banter or even full bore mock the mage. Who up until this point had been able to senselessly slaughter any mortal who stood in his path. This is just the level of nonsense you will come to expect from this game when you play it.

The stakes are high, with a world plagued by war, plague, and dark magic. Within the first 2 chapters of the game, you find yourself pitted in a brutal gang war between a particularly nasty group of vampires. Which has taken issue with the league of assassins and thieves the Shadow Thieves who strike fear into the city of Athkatla. Neither gang is particularly a “lawful good” choice in terms of aligning yourself with, however, in the hunt for the evil mage Irenicus you have to pick. Forcing players to make enemies of one terrifying group or another, leads to many tough decisions and depending on the difficulty you play on, many a reloaded save. 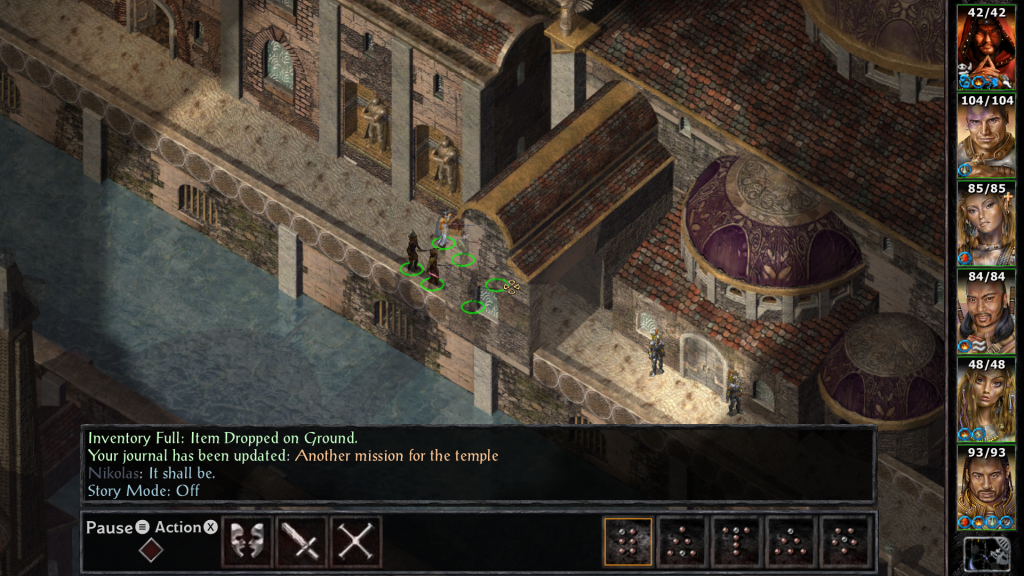 One of the hardest things about going back and playing an old game can sometimes be getting over flaws that were just part of game design for the time. Whether it be clunky controls, slow UI, outright strange control schemes, or just poorly aged mechanics. Baldur’s Gate II does not suffer from this problem, as the UI and menus are straight to the point and are easy to learn and navigate. It doesn’t matter whether you decide to play the game on PC or console, the controls are intuitive and easy to learn. I will give huge credit to Beamdog with the release of the definitive edition of Baldur’s Gate I & II on console. The ability to access organize your party, inventory, spells, and battle within the restrictions of a controller was incredibly well done. This love and care make the game more accessible than ever before. Whether you have a PC to play the game on, or prefer to pick up the collection on Xbox One, PlayStation 4, or Nintendo Switch.

To be frank some games aesthetically age horribly and don’t give a proper insight into how beautiful they were for their time. However, Baldur’s Gate II’s world is beautifully crafted, and with its top-down perspective, it helps the game considerably better than other games from this era. The characters models certainly look a little rough around the edges, but the worlds that you explore and painstakingly detailed. Whether you are descending to the depths of hell itself or exploring the wild wilderness. Baldur’s Gate II has some absolutely stunning worlds for you to explore, filled to the brim with terrifying creatures to battle. The sheer scale of the world and the beauty and darkness you will find on your journey is as timeless as the game’s story.

An Important Pillar Of The Genre

If you are a massive fan of RPG games it should be clear by now that you should play Baldur’s Gate II. While games like Cyberpunk 2077, Avowed and more look to push the RPG genre forward and into the future. Baldur’s Gate II remains a massively important part of the history of the genre. It stands tall alongside important Western RPG franchises like Fallout, Bard’s Tale, Elder Scrolls, and KOTOR. While the game has not been available outside of the PC platform up until very recently, console-only recently got ports of the Baldur’s Gate I & II. Hopefully, this article has convinced you to give this incredible game and franchise a shot. Whether you played the game back in 2000, or are playing it for the first time this year. There is always time to play Baldur’s Gate II in 2020, especially to prepare for a playthrough of Baldur’s Gate 3.