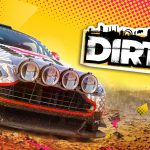 When it comes to racing games, they are almost as old as video games themselves. People are infatuated with speed, competition, and the thrill of the ride. The genre is particularly suitable to showcase all the graphical bells and whistles a new console generation is capable of. With the ninth generation of consoles right around the corner, it is no surprise that veteran racing developer Codemasters will be first in line to show off Dirt 5. Codemasters takes great pride in their racing games, whether it be closed-circuit simulator Formula 1 or Dirt’s predecessor Collin McRae, the developer pours its heart into its products for racing fanatics all over the world. Dirt 5 is no exception. For good reason, the Dirt franchise remains in the top tier of elite off-road racers.

Tight precise controls coupled with a marvelous physics engine are the foundation of a good racing game, and it is a foundation that is rock solid in Dirt 5.  Driving leans more on the arcade side rather than simulation but remains highly satisfying. Pulling off a drift while skidding in the mud and overtaking opponents is exhilarating.

The game gives vehicles a strong sense of momentum through turns. The tactile feel of the tires matches well to the different terrain and weather conditions. The feel of driving on sand is distinctive from snow, and it is well represented in the game.

Each car has its own unique handling and nuanced feel to them. No two cars drive the same in Dirt 5, which is a testament to Codemasters’ meticulous attention to detail. The game also nails the sense of speed beautifully, which is not a given feat in many racing games. Luckily, like its predecessors, Dirt 5 nails down the feeling of speed in an off-road setting.

Additionally, players can manually adjust the game’s driving assists, which caters to both newcomers and pros alike. While Dirt 5 is not a hardcore racing sim it does excel in what it aims to be and that is a fun, engaging off-road racer. The game is a testament to the developer’s ability to continue to iterate the long-standing franchise while keeping it fresh and unique. And how does it keep it unique? Why, by its different cars, modes, and tracks, of course. 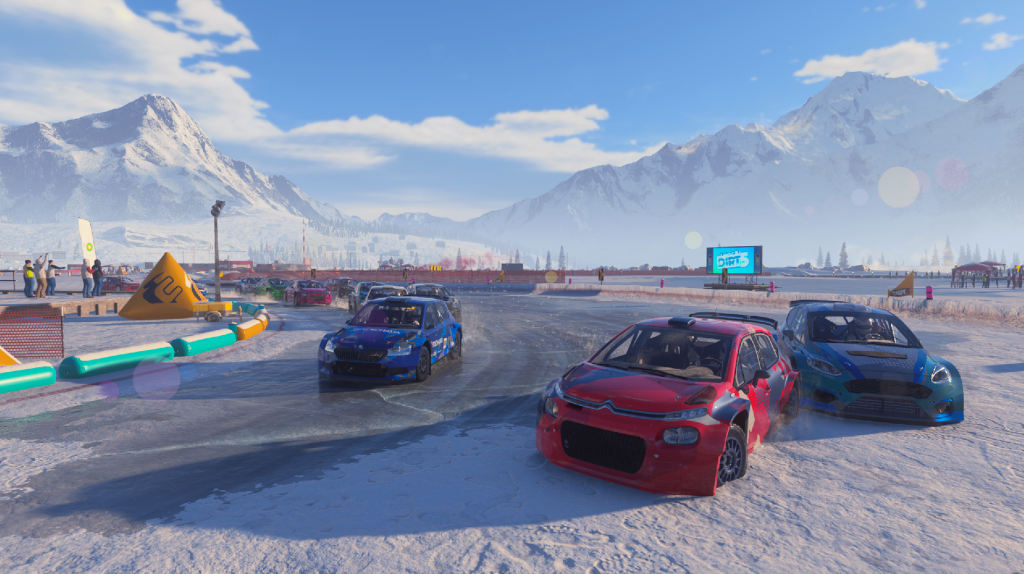 Some of the previous Dirt games were criticized for a lack of variety in the career mode. Fortunately, Dirt 5 has revamped the entire experience. Now, the game features multiple race types. From the traditional point A to point B races in rally raid to the literal uphill battle that is pathfinder, the game does not skimp on the different race types with nine in total.

Career mode adds one-on-one showdowns with certain drivers and sponsorship challenges. These challenges add objectives to each race and reward you handsomely for your efforts. Speaking of rewards, experience gained in Dirt 5’s career mode increases your level, rep, and cash rewards. Every race victory and completed objective unlocks different car liveries and patterns to help customize your ride. This allows you to add flair to your ride and express your style through decals, sponsors, and patterns.  In total, there are 64 different cars you can buy and customize.

The career mode is broken up into multiple chapters with each more challenging than the last. Additional race objectives become more difficult to achieve than before, while the AI also puts you through your paces the more your progress. The increasing difficulty, compounded with additional objectives from sponsors makes sure that races are kept fresh throughout the career experience.

The Modes The Merrier 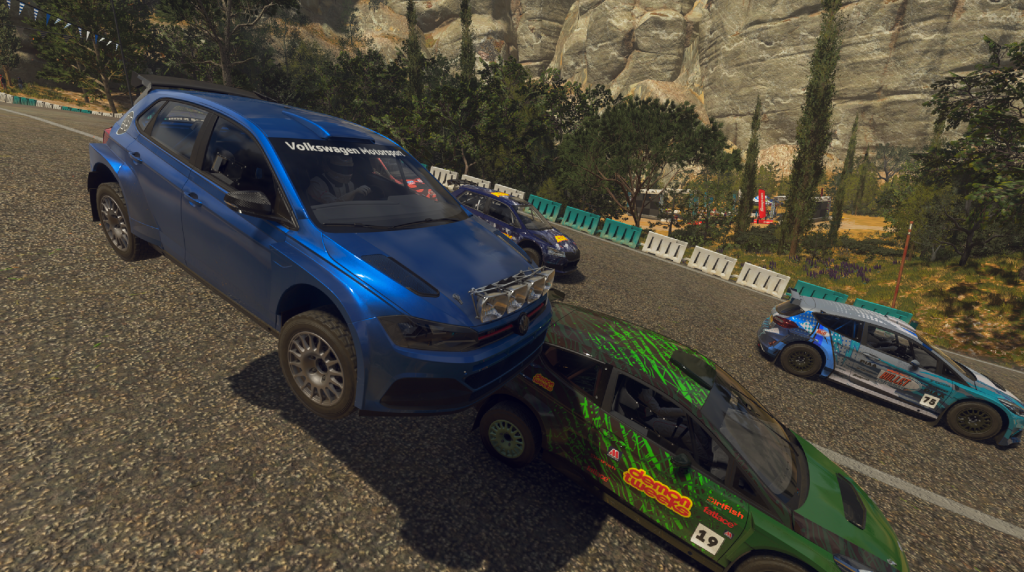 Dirt 5 also encourages imagination and experimentation through its unique playground mode. Here, players can create their own tracks and upload them for others to try and then vote for which tracks they liked. This will help curate a suggested tracklist. Some of the player-created tracks can get crazy as well. Especially gate crashers, which are essentially a driving obstacle course that will test your patience as much as your driving skills. The mode entails mastering convoluted user-created tracks full of sharp, sudden turns and tactically placed bumps that could throw off your race against the clock. It was definitely one of my favorites in the playground mode.

Dirt 5 also comes with the standard arcade and time trial mode and online multiplayer. It even includes local split-screen, so you can take on your significant other, siblings, or cat on the same couch! That is a godsend, especially since more and more countries are going back into lockdown. More activities that can be played with the people in your home are always appreciated.

Race Around the World

Dirt 5 features an impressive amount of variety when it comes to its tracks. From the snowy hilltops of Nepal to Brazilian favelas, the game’s tracks are diverse as they are engaging. One of my personal favorites is the icy river below New York’s Roosevelt Bridge. Not only does Dirt 5 capture a picturesque metropolis that is New York City, but it also nails the feeling of driving on an icy surface. Another standout is the Morocco desert that featured an uphill climb in a souped-up buggy that is the pathfinder race type. Each track has its own unique personality and that really shines through in the level design.

Dirt 5 features some of gaming’s voice acting heavyweights. Both Nolan North and Troy Baker are the game’s narrators. They play the role of podcasters recounting your ascendancy in the rally world. Other famous actors like Seth Rogen make an appearance in the game (vocally that is). As expected, both North and Baker did a great job of bringing their roles to life. Both are seasoned voice actors that have worked on several projects in the past and it shows. They have great chemistry, which helps make their podcast feel authentic in Dirt 5. This adds to the game’s high-value production which carries over into its graphical fidelity. 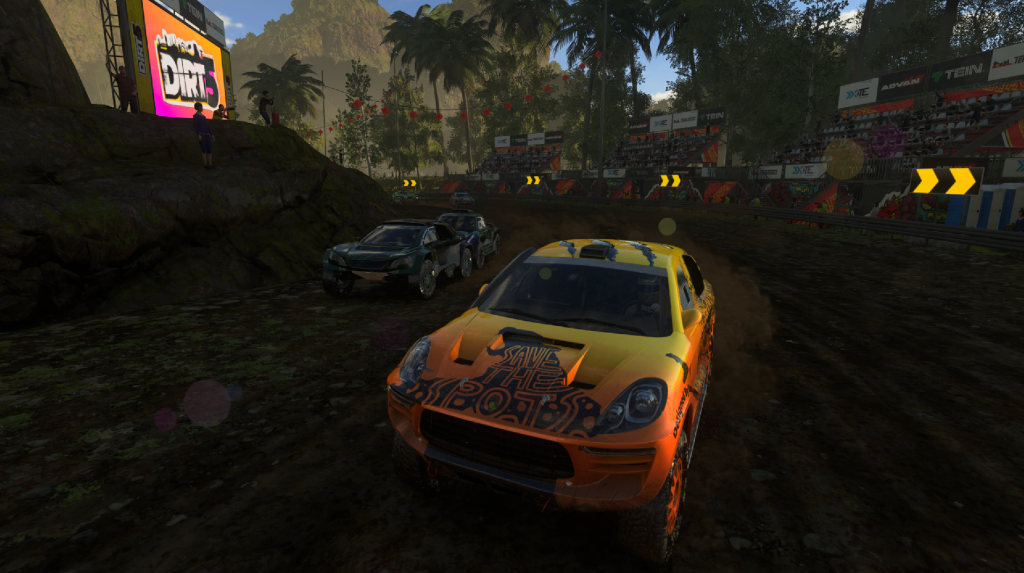 Graphically, Dirt 5 looks clean, which is ironic given the game’s title. Clean in the sense that the car models, environments, terrain effects, and even the menus are of high quality. From the onset, the game’s presentation stands out as extremely polished. From the bright and vibrant menus to the reverberating soundtrack, Dirt 5 is a culmination of carefully crafted style. It oozes its spot-on presentation from the moment you reach the main menu. Dirt 5‘s presentation sets the mood for the rest of the experience and compliments the game’s adventurous spirit. The car models are rendered beautifully, while the tracks are vibrant, colorful, and full of details. Even puddles are beautiful as they reflect their surroundings during day time.

Dirt 5 also features a robust weather system that impacts gameplay. Rain makes sure that mud will flow, while sandstorms will impede visibility. The weather system is well conceptualized and implemented. Since we reviewed the PC version, we got to experience Dirt 5 at high frame rates. And I must say, that playing the game at over 100 frames is an absolutely stellar experience.

Console players with high refresh rate TVs are in for a treat. I would highly recommend opting for the higher frame rates as it will improve the experience beyond expression. The smoothness and clarity of high frame rates complement Dirt 5’s excellent depiction of speed. However, the game’s visuals are taken aback by technical hiccups.

Dirt 5’s visuals suffer from clear visual defects. Pop in from environmental objects is all too common. And for some reason, when racing, there is a line of pop in that is constantly ahead of you during races.  It is like a wave that loads the assets ahead of you. Focusing on that pop-in line is extremely distracting and could detract from the game. Crashes to the desktop happened a few times as well. Even the audio can act buggy at times.

Sometimes, you can hear distinct audio clipping through your headset or speakers. This is especially annoying as it detracts from the authentically recorded car sounds. I noticed this was far too common when cars backfired. And in rally games, your car backfires a lot. Fortunately, Codemasters informed us that they are aware of the visual and audio bugs and will provide a day-one patch to remedy these technical issues. It is also worth noting that the game is not yet optimized via Nvidia and AMD drivers. Expect a more stable experience when the drivers release.

Overall, Dirt 5 is a well-thought-out off-road package that is built upon a successful foundation. Satisfying driving, robust physics, and weather effects remain core to the experience and content is aplenty. The game’s playground mode is a wonderful addition that will help spark its players’ creative juices. While Dirt 5’s graphics and effects are impressive, it does have technical issues like pop-ins and weird audio bugs. A day-one patch and GPU driver optimization should address these issues. All in all, Dirt 5 continues the trend of Codemaster’s already impressive racing pedigree.

Dirt 5 was played on PC for this review with code provided by the publisher.