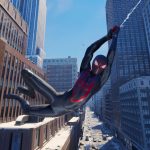 Spider-Man fans have seen what it means to “Be Greater” with 2018’s Marvel’s Spider-Man. But, what does it mean to “Be Yourself”, the defining tagline to Marvel’s Spider-Man: Miles Morales? To answer that question, Insomniac Games set out to not only create another great Spider-Man game, but one that belongs to Miles Morales. This is his story, his game, and his time to become the Spider-Man he was destined to be.

Becoming The Next Spider-Man

The bar was already set high for Insomniac Games to deliver another great Spider-Man gaming experience. Anyone going into Spider-Man: Miles Morales can correctly assume the same game design formula from 2018’s Spider-Man. It is an open-world New York City filled with mini-game challenges, collectibles, and a photo mode to capture all your best moments. So, how do they make it feel different? Introduce Miles Morales, the protagonist for the PS4/launch PS5 game.

Miles is a rookie webhead in training filled with youthful ferocity. After a brief blunder while attempting to save the city, Miles is filled with apprehension about his place and potential as a hero. Peter Parker is put in the role of veteran webslinger and his belief in Miles makes him a real mentor. Peter knows all too well that mistakes come with the job. Miles has a lot to learn, but it will not come solely from thinking, “What would Peter do?” Miles has to be not just Spider-Man. He has to become his own Spider-Man. 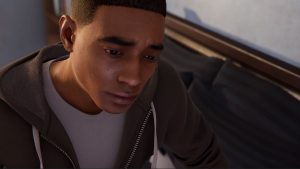 Insomniac Gets The Culture Right

Being half-Black and half-Puerto Rican, Miles is our window to a part of life never displayed for millions to see before in gaming – a Black and Hispanic neighborhood on the East Coast of U.S.A. Miles rocking Timberland boots, a symbol of New York City culture, on the subway with a soft Hip-Hop beat playing in the background lays the ground work. When he hits the streets of Harlem, Dominican and Puerto Rican flags are on display at bodegas and in Christmas decorations. You will hear residents speaking Spanglish to one another, including Miles and his Puerto Rican mother. All of these subleties bring a fresh perspective through Miles’ dynamic culture to the best kind of Spider-Man stories – the epic clash between his personal and superhero life and how he barely manages to resolve it.

In their apartment, classic Puerto Rican house decorations like Coquí magnets, Casitas de Ceramica, and even the Rooster statue can be seen. As someone who loves his Puerto Rican heritage, I was immediately filled with happiness and pride to see my culture represented, and to have it done right. It was a moment I had to bring my family in to show them that our culture was here for millions of players to see. 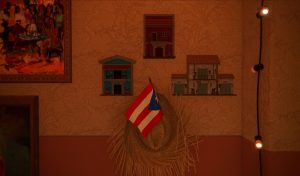 This community that Miles has grown up in reflects onto his good-natured and stylistic personality. He can be humble and timid, but his willingness to be a Spider-Man worthy of New York City knows no limits. The game’s main villain will push Miles to make hard choices. Miles will make mistakes. He will tumble and fall. But by deciding to get back up and face the impossible, he makes this a great Spider-Man story and an inspiring coming-of-age tale. Miles was already one of my favorite comic book characters, but the game has cemented him as one of my favorite video game characters ever.

What Makes Miles His Own Spider-Man

Since Miles is a Spider-Man in training, he lacks of bit of grace and composure in his web-swinging. This is not to say the web-swinging in the game is not refined. You can expect the same fluid swinging motions that were found in Marvel’s Spider-Man, but it is now all done with Miles’ personality and youthfulness baked in. Miles will flail his arms in between swings, dive off of a building backwards, and can pull off more airborne tricks than Peter. It is Miles doing what he does best, which is being himself in every facet of his life. Not only does it make traversal more fun, but it felt like I was constantly improvising at any moment compared to Peter’s more refined techniques. 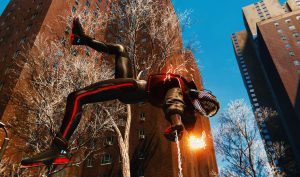 Miles is a unique type of Spider-Man given that he has two additional powers: bio-electricity and invisibility. While Peter was more gadget-heavy in combat and stealth, Miles is restricted to only four gadgets. However, his additional powers make up for it. Bio-electricity, named Venom Punch in the game, stuns enemies on impact. This power can be upgraded to pull off different kinds moves, like having the electricity bounce between enemies or having Miles ground pound to stun surrounding opponents.

Miles’ invisibility is fantastic for escaping overwhelming fights. It is also incredibly entertaining to see a henchmen’s utter shock at a disappearing Spider-Man to then get sucker punched from behind. Since enemies can get pretty aggressive, invisibility is extremely useful to slow down group fights and rethink your approach. Throughout the 8 – 10 campaign, his limited number of gadgets and additional powers ended up being more enjoyable and challenging than 2018’s Spider-Man.

Technical Issues Across the Board

Traversing through the city as Miles is without a doubt the highlight of Insomniac’s New York City. Side missions, optional challenges and random crime events do make a return. While a handful tell some worthwhile story beats that tie back into Miles’ family, a majority felt like by-the-numbers open-world filler. If it were not for Miles being such a distinct character, the game would feel extremely similar to its predecessor.

That is not to say the content is unfun or purely copy and pasted. Zip lining through markers in Central Park to get the best time is still enjoyable. Miles’ new powers bring an entertaining dynamic to puzzles and combat. There are even a few spoiler-ish surprises packed into side content worth playing. Still, you have to wonder what Insomniac is planning for the next game to break the mold despite delivering more of a great thing with Spider-Man: Miles Morales.

On PS4, my playthrough consisted of more than a handful of technical bugs and glitches. During some conversations, audio would get cut off. Prompts to continue a puzzle would not appear, forcing me to restart. And some visual oddities made its way into main missions. These issues were by no means game-breaking, but it is certainly a lack of polish I did not expect.

Notes on the PS5 Version from LordsofGaming.net Writer Eugene Schaffmeir

Spider-Man: Miles Morales leverages the power of the PlayStation 5 through a visual fidelity mode as well as a performance mode that improves frame rate. The visual fidelity mode adds enhanced lighting plus real time dynamic ray traced reflections. While in a 4K resolution, locked at 30 FPS. The performance mode subtracts ray tracing and some lighting enhancements in favor of a locked 60 FPS with a dynamic resolution upscaled to 4K. It should be noted that the pixel count never dips below 1440p and does approach native 4K at times.

Visual fidelity mode is the way to go for sure. The ray traced reflections add a new level of detail to the city. The new textures and details on every single item in the game elevate Spider-Man: Miles Morales as one of the most impressive PlayStation games ever made. Entering photo mode, or just inspecting random buildings around the city show an unbelievable level of detail. Insomniac has left no stone unturned. 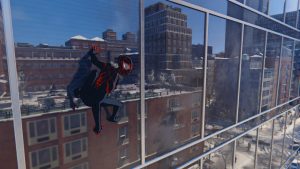 The PlayStation 5 version of Spider-Man: Miles Morales takes advantage of every PS5 feature, not just the new GPU. After the five to ten minute wait installing the game from disc, you will never see a loading screen again. The game takes just under two seconds to launch and has no in game loading screens. Plus, the open world level design is perfect for the PS5 mission cards. You can jump straight into any one of your active quests right from the PS5 home screen.

Other Notes on Spider-Man: Miles Morales for PS5

The PS5 version of the game can also take advantage of the new peripherals. The 3D audio is a nice touch but, you will never be in a situation where it improves the gameplay. As you walk away from an NPC, their voice will change in direction and volume. As you turn so will the sounds that you hear. Although you will never be in a position where your human spider-sense goes off when someone is behind you. It’s just a nice touch.

Similarly, the haptic feedback adds to the immersion as Miles uses his Venom Powers. You can feel the electricity in your hands through the enhanced rumble. The adaptive triggers are used to swing. Although this does not really add much to the game either. When you use both hands to swing L2 never locks in like R2 does. Plus, how R2 behaves when you swing never changes. So, the changes to the triggers just start to feel inanimate.

Spider-Man: Miles Morales as a sequel is a half-step from Marvel’s Spider-Man. The game is not trying to bring a fresh take on superhero open-worlds. Rather, it is refining the mechanics and shaping it around the true star of the game: Miles. Spider-Man: Miles Morales is a completely character-driven game that knocks it out of the park and some. Miles, his family and friends, his neighborhood – all are standout parts of this personal coming-of-age story that triumphs the original game. Take into account the rich Hispanic and Harlem culture seen throughout, and you have something truly unique. 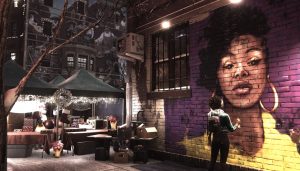