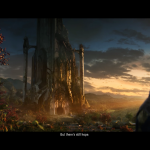 You are reading
Warframe Review – The Best Free to Play Game

Warframe is a free-to-play third-person stealth-action game developed by Digital Extremes. Originally released in 2013, Warframe is a persistent online game that is constantly evolving and improving. I started playing in 2016 and have watched as the game has grown in complexity and scope over the years. Its fluid combat system blends melee combat and gunplay and combines with a staggering amount of content to play through all lovingly stitched together with compelling story content from start to finish. So much so that when you pick this game up, it will be hard to put it down.

The Humble Beginnings of Warframe

In Warframe, you play as the Tenno, an ancient warrior of a long-forgotten age who are able to wield the titular Warframes. In the very beginning, you awaken as a captive of one of the three main factions, the Grineer, in a derelict structure. The opening quest to free yourself gives a taste of the fluid combat in Warframe as well as the game’s parkour movement. These are the game’s bread and butter and what makes Warframe stand out in a gaming space full of sci-fi online titles. 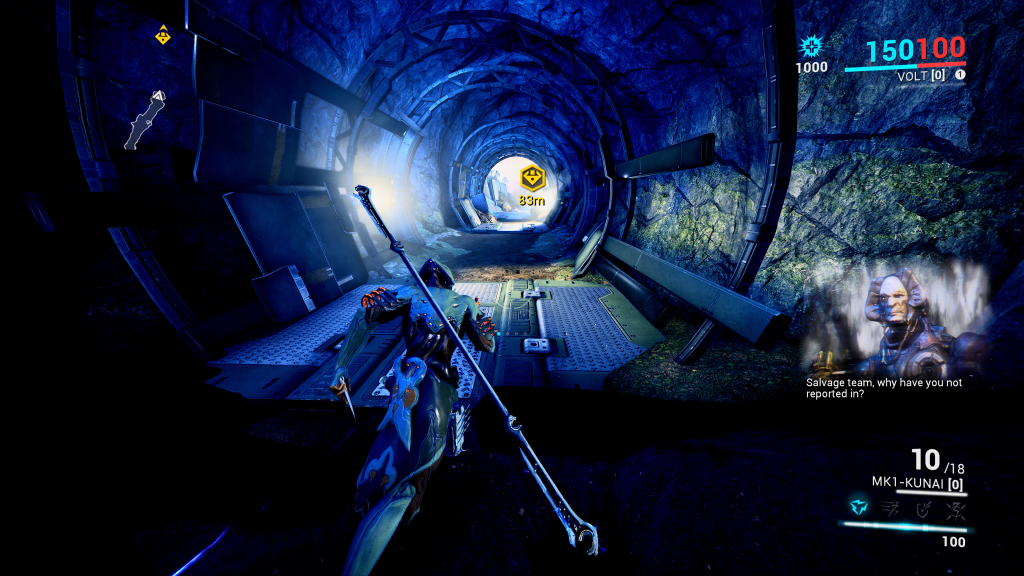 After you free yourself from captivity, you are introduced to your two companions. A friendly AI companion named Ordis and your guide, the Lotus. She provides you with the rundown of the universe in which you are entering. This includes information on the other two warring factions, the Corpus and the Grineer, who are fighting for control of the galaxy.

The story of Warframe could very easily be just a layer of paint on top of a tremendous online action game. However, it is far more than that. After completing the opening mission, you are introduced to the game’s three factions each of which is maneuvering and angling for increased power in the solar system. Navigating your way through these factions feels deliberate and meaningful. The characters have strong motivations that are conveyed well to the player and when the twists and reveals happen they feel weighty and impactful. The story is dynamic and kept me on the edge of my seat, and even now I await the next patch to follow the ongoing narrative.

Working Your Way Through the Solar System

Warframe has nineteen worlds to progress through that are filled with simple and linear missions that are unrelated to the story content. The game uses procedurally generated tilesets for the majority of the game. Meaning that every mission will have similar environments, rooms, and hallways. But they will always be randomized. 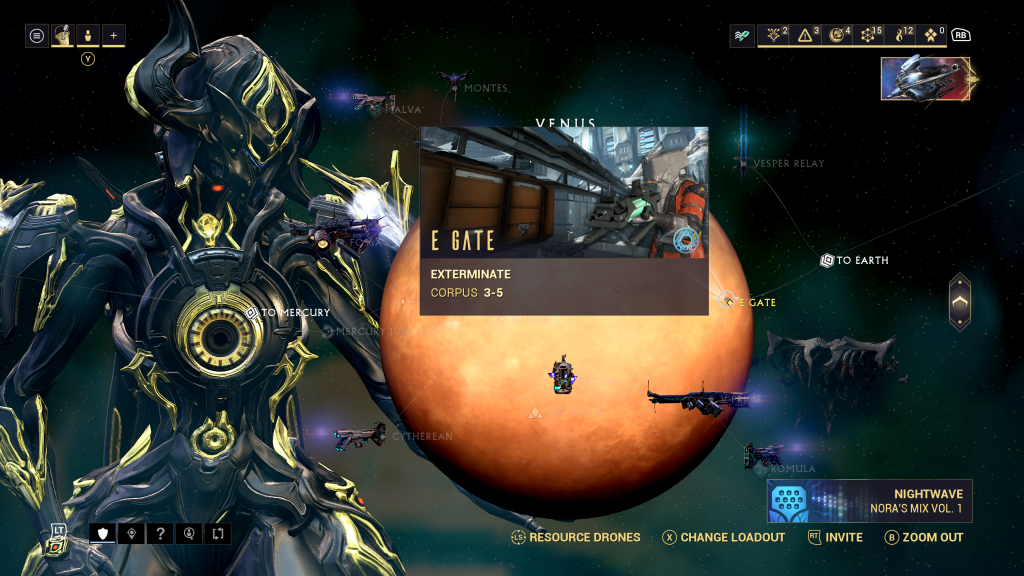 This helps to add to the experience of each unique world. Earth, for example, is a lush jungle-like environment for the Grineer. While Venus is a snowy mountain area where the Corpus reside. Other planets and planetary bodies like Deimos and Eris are home to the Infested, with derelict ships that have grotesque flesh and destroyed areas throughout. No two worlds are the same, and each run will always feel fresh at first. Eventually, though, it becomes mind-numbing.

In recent years the game has added three open-world areas for characters to roam around in: One for Earth, Venus, and Deimos. They are not gigantic but have their own unique cities, characters, and enemies to fight. With long caverns, secrets, weather cycles, and bosses to fight in each one. There is a lot of variety that will keep you feeling motivated to constantly explore.

There are nearly fifty warframes, and hundreds of weapons, with a tight and satisfying playstyle to them all. Every warframe is unique with a set of abilities that cater to a variety of playstyles. Such as Volt being a lightning caster frame that can go very fast. As well as Mag that can use gravity to push and pull enemies around and protect herself from enemy weapons with an ability that absorbs any and all projectiles, like grenades or bullets. While Excalibur is a warrior that can use his energy sword to chop down all in his path. There is a warframe for every play style in this game. Where changing from Volt to Excalibur comes down to curiosity, preference, or necessity in certain missions. 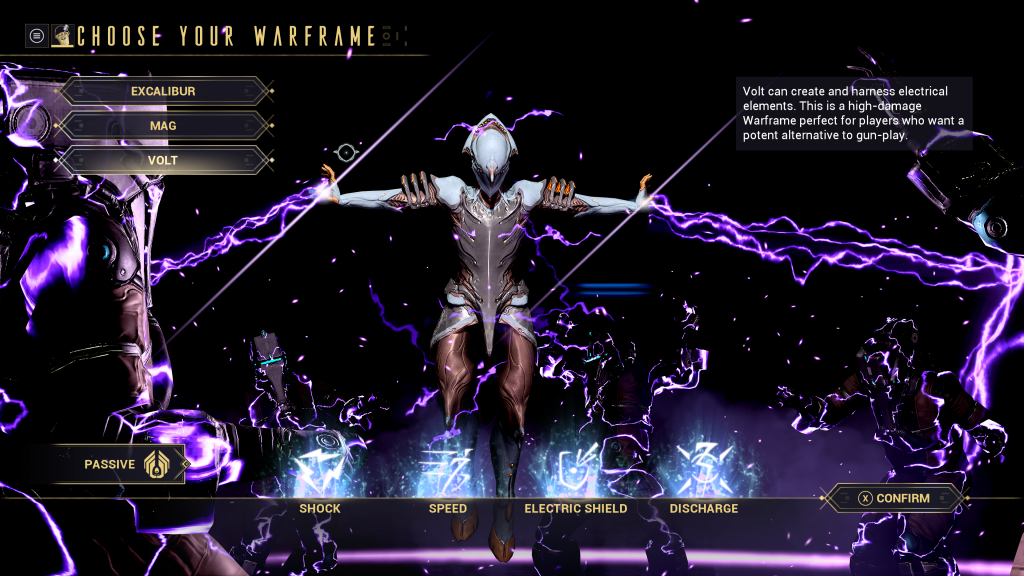 Adding onto these is a ludicrous amount of weaponry. The game features the standard stock of weapon types, though there are some certainly inventive ones like the buzz saw. While the variety allows for players to pick weapons appropriate to their desire every weapon in a specific class can start to feel redundant. Weapon stats, such as higher damage or faster attack speed are the only differences between two different staves or gunblades for example. My favorites were the sword and shield weapons since they can block bullets more effetively than other weapons and have crazy attack animations. 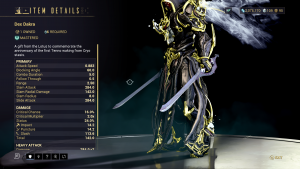 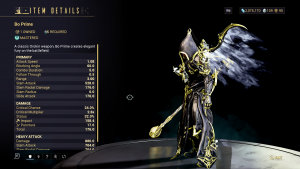 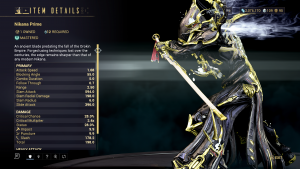 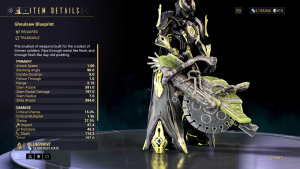 Warframe puts me to the test constantly and always keeps me engaged even in simple missions due to how enemies attack. Despite fighting the same types of enemies for hours on end. They will always organize around the environment in interesting ways. For example, they can use cover to take shots at you from far away, with snipers hiding behind them while others can run towards you and catch you off guard with a melee attack. It perfectly matches the fast and fluid gameplay of the game.

While taking down enemies in Warframe becomes commonplace quickly, the real tests come from the bosses and junctions in each world. One of the very first bosses you fight in the game is the Jackal. A hulking robot that you need to shoot his legs to weaken and then use your security hacking tool to take down. But other bosses, require you to survive constant ambushes or look for moments to deal damage to them. I enjoyed each and every boss of this game. But the tedium of some of the fights can be sluggish when you have to fight them more than once to hunt for warframe parts.

But while some bosses are a challenge, the only way to unlock a new world is by facing off in a “Junction”. These have enemy warframes that you have to eliminate. These force you to understand how the different warframes work, and serve to highlight the wide variety of warframes present in the game. It is a great way to introduce players to warframes that they otherwise may not have played with by pitting you against them. 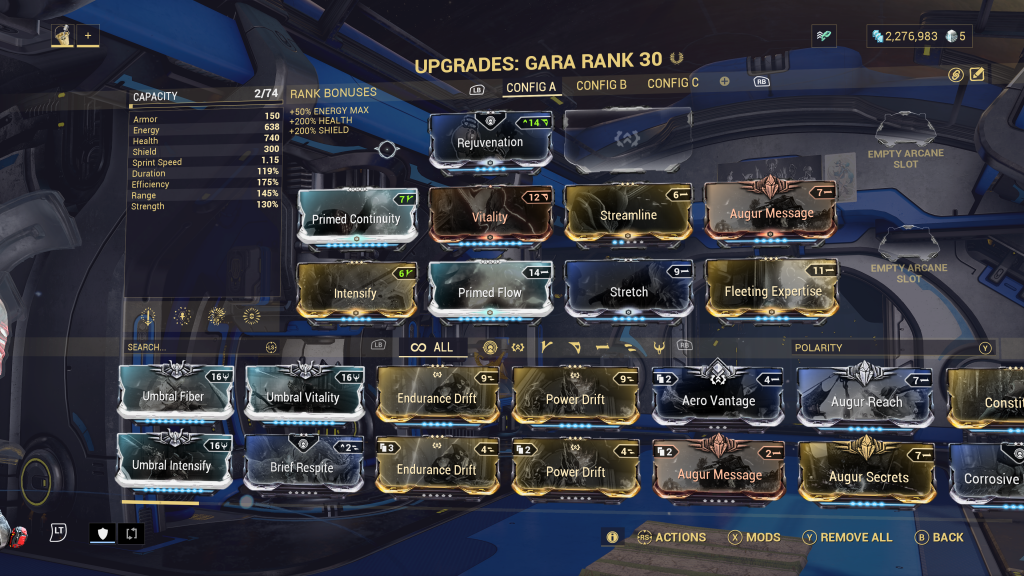 To help you survive against these challenges is the game’s “mod” system. Mods are items that can be installed in warframes, weapons, and companions. Each mod can boost a variety of stats. But this system is not easy to understand when you are introduced to it. It is quite confusing trying to understand what you need to install since there is a mountain of mods with several layers of complexity to them. It is a very deep system that is frustrated to use.

The Endgame of Warframe

As with all online games, Warframe has an endgame that is varied yet unfocused. In one of the open worlds, you have mega-bosses you need a group to take down for arcanes. Arcanes are similar to gems in World of Warcraft. These open up new options for how you build warframes and weapons with mods. But outside of this are daily missions, farming prime variants of warframes and weapons. As well as progressing through The Steel Path, which just allows you to go through every mission of the game at a very high level for lucrative rewards. 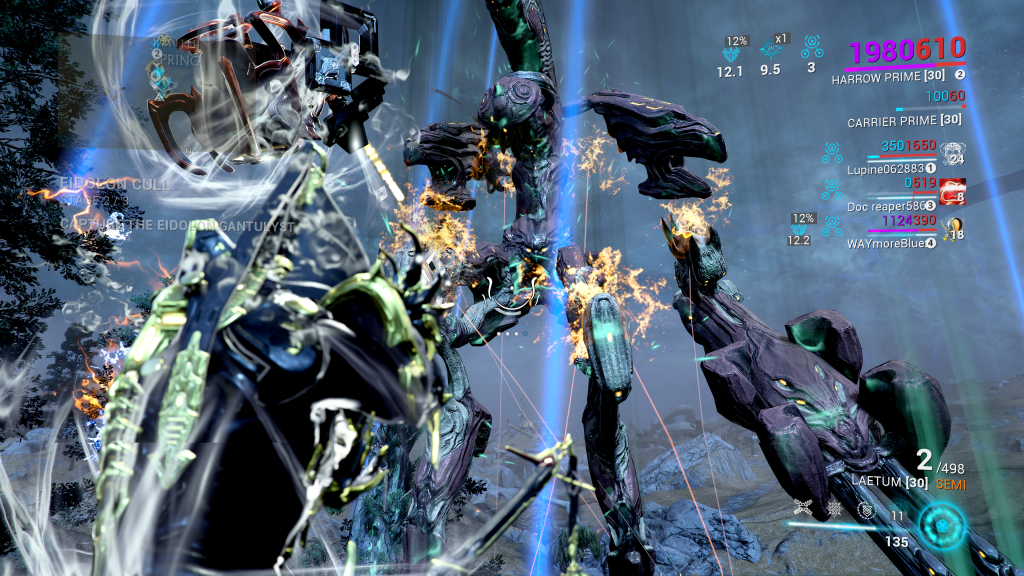 However, there are no activities similar to raids in Destiny 2 or trials in Elder Scrolls Online. The game even lacks a meaningful player versus player scene. The developer’s focus has almost entirely been on the PvE side of the game. When you have every warframe, weapon, and companion with unique builds from mods and arcanes. You feel stuck waiting for the next content update. But to the game’s credit, it takes nearly a thousand hours or more to reach that point.

As with all free-to-play games, Warframe comes with microtransactions. The lifeblood of the premium side of the game is “Platinum” a currency that is used for countless things. You can use it to buy cosmetics, ship decorations, and rush stuff that is building in your ship’s foundry. You can even use it to buy warframes or weapons. However, while that last part sounds like a typical “free-to-play, pay-to-win” scenario. I can assure you that everything involved in gameplay that can be purchased with platinum, can be earned in-game through standard gameplay.

Farming these items can take days while spending money can take just a few seconds. I am not a fan of the grind, since getting a blueprint for a weapon should not require randomness in activities that can take hours on end to yield a result. 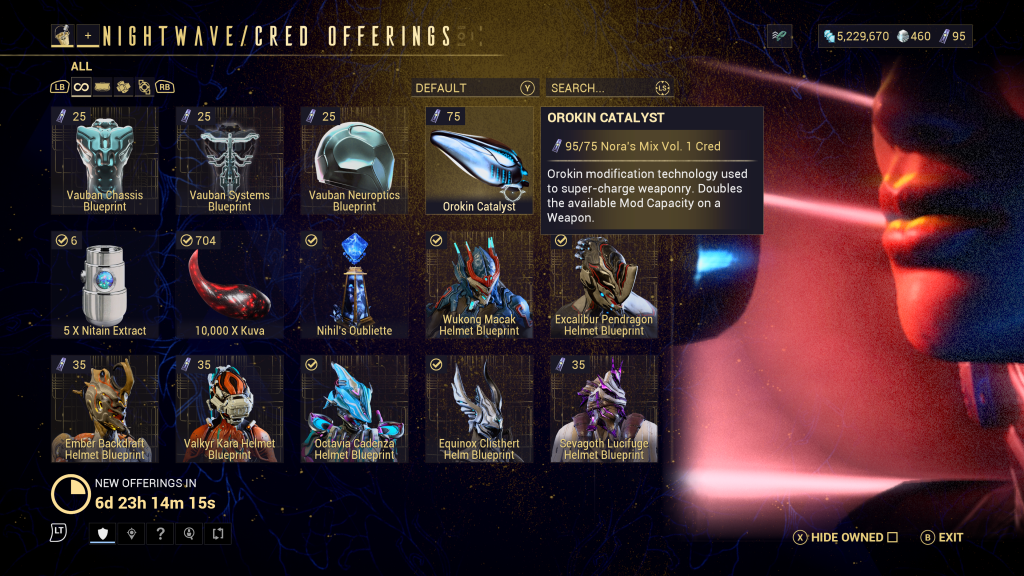 Warframe parts can be farmed from bosses and missions. Weapons can be built with resources you find on different planets. The game does not have a single weapon or warframe locked behind its marketplace.

But the upside to the monetization in Warframe is that every bit of content, such as every playable world, expansions, and story quests is completely free to every player. The game has no obnoxious ads for items in the market and no loot boxes. It is a very respectful way to handle player spending even if farming stuff is tedious at times.

Warframe is an endlessly pretty game. Whether you are in standard missions, or out in space, the game is very beautiful. Every planet feels visually different from another and the open worlds offer breathtaking views. However, facial animations for characters can feel lifeless. They all have distinct personalities and great voice acting, but the character models never emote. Thankfully these problems do not exist in the cinematic quests, where it really counts. 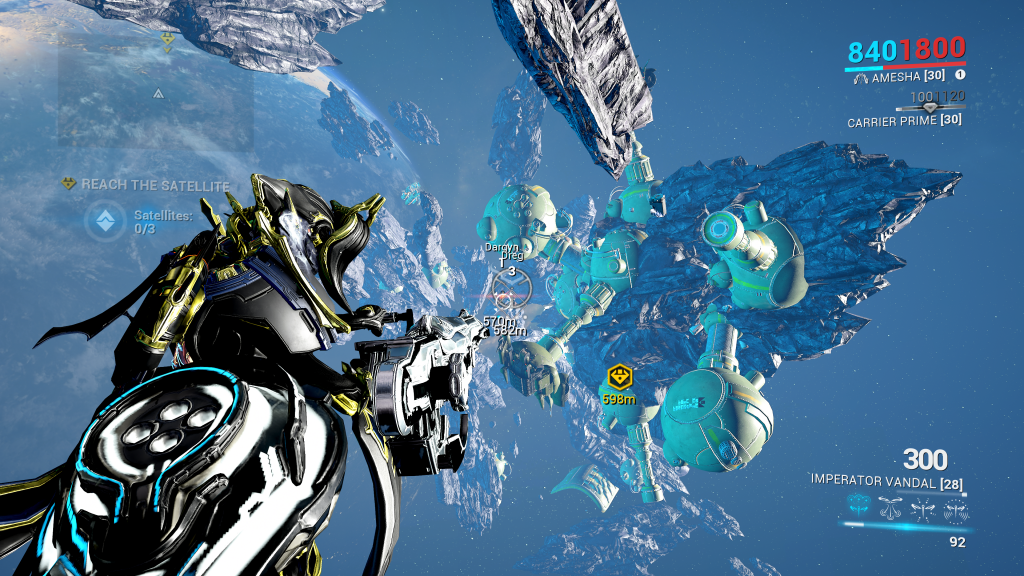 Warframe also has a great UI in both gameplay, in menus, and on your ship. I never felt lost navigating menus and could understand how to use abilities and where enemies are.

But the game on a technical level is inconsistent. Playing on the Xbox Series X, the game loads and runs very well, with no framerate drops or crashes. But every now and then, I can spawn under the floor in a mission. Fall through the map, get stuck in an infinite loading screen, and feel latency when joining public mission lobbies. This combines with enemies in exterminate missions spawning at the very beginning of a mission when I am at the very end. Despite all of the technical issues though, I never walked away from it.

Warframe is a great game. As you progress through the game worlds and amass your arsenal, you begin to feel powerful. When you experience the major story events, you can begin to look at this game in a different light. There is so much variety in how you can play. The game’s monetization is fair and the community engaged with it is wonderful and helpful. All held together by a very dedicated development team that continues to impress and update the game with meaningful content.

For all of the reasons above, I can highly recommend Warframe to anyone. You can play it alone, or you can play online with people and have a great time with them.