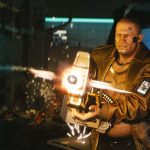 We have seen a lot of big games release this past year, that have been massive critical and commercial successes. Games such as Ghost of Tsushima, Final Fantasy VII Remake, and of course The Last of Us Part II. All of these games generated massive social media interest alongside commercial success for the developers. One of the last big AAA releases that we have this year is of course Cyberpunk 2077. This could be described as one of the biggest closing generation games, from a developer that has incredible fan goodwill due to The Witcher 3. How successful could Cyberpunk 2077 be? It crashed Steam in just under 5 minutes of its launching, as swarms of people tried to load, download and play the game. 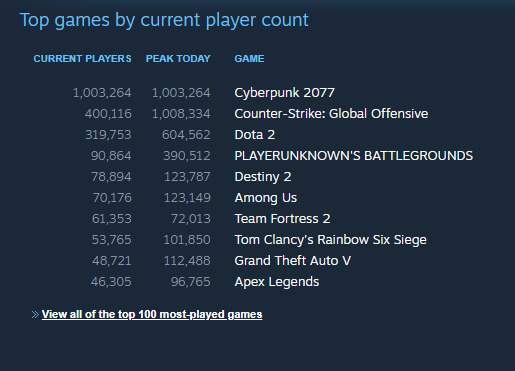 Despite all these struggles and hiccups, Cyberpunk 2077 already has over 1 million players concurrently on Steam. By accessing the game and player statistics tab of Steam, you can see the top 10 most played games concurrently on the platform. As it currently sits there are just over 1,003,000 players currently playing Cyberpunk 2077.  This is an incredible amount of players playing at launch, especially considering it’s a new IP as well as a deep RPG. As stated by sales analyst Benji-Sales on Twitter, the previous record for Steam was set by Fallout 4 at launch with 472k players. With these numbers, this record has officially been shattered. It will be interesting to see what the sales figures look like for Cyberpunk 2077 when the dust settles.

For comparison the previous biggest record for Steam launch day was Fallout 4. It did 472k at launch. Cyberpunk has more than doubled it

Fallout 4 shipped 12 million units launch day. I cannot imagine how Cyberpunk numbers are about to be

Did you buy Cyberpunk 2077 on Steam? Let us know in the comments and don’t forget to check back for the latest gaming news and information.