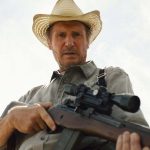 Last weekend I just could not write a box office recap. With the lack of new movies, Wonder Woman 1984 easily took the weekend. Now that a new weekend is here though, a new movie is on top. Liam Neeson’s The Marksman was able to take the top spot at the box office.

The Marksman grossed an estimated $3.2 million in its first weekend. This was more than enough money to push Wonder Woman 1984 into the second spot. The movie is now sitting at $141 million worldwide. Fans only have a little over a week before the movie is taken off HBO Max. Godzilla vs Kong is set to get an early release in theaters and on the streaming service.

Monster Hunter has failed to make a mark at the box office. This movie is now sitting at $9.2 million domestically and $16.2 million worldwide. I doubt that movie will do any better with a home release. It really is difficult to find a great video game adaption that fans enjoy. One of the more successful movies during the pandemic is The Croods: A New Age. It has grossed an estimated $40 million domestically and $134 million worldwide. That’s not counting the VOD money; the movie cost $19.99 to rent. News of the World grossed a little over $1 million this weekend. It has now grossed $8.7 million at the box office. The Marksman should easily take over that amount in the next few weeks. I doubt it will be dropping from the top spot next week.

The next big release is The Little Things, set for January 29th. This movie will also be released on HBO Max the same day. It features Denzel Washington, Remi Malek, and Jared Leto as two cops who track down a serial killer. You expect to see that movie easily sliding into the top three. I could be wrong though, movies are just not as easy to track as they once were. A little strange news happened this week. Chris Evans might or might not be coming back as Captain America.