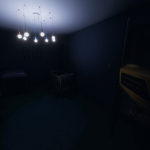 You are reading
Banshees Have Been Updated in Phasmophobia

Phasmophobia updates nearly every day with bug fixes and new features for players to try. One of the latest updates includes changes to the way the Banshee type of ghost behaves. This new update has the potential to vastly change gameplay around Banshees.

There are twelve different types of ghosts in Phasmophobia. Each has distinct strengths, weaknesses, and behaviors. The Banshee is an interesting ghost. It chooses one target from all of the players. The chosen player then becomes its focus. The banshee will then follow this player to different locations throughout the map. When it starts to hunt, it will only try and kill its target player. This meant the other players were safe.

Or at least, that is how it used to be.

Banshees still target one player, but the update has made changes. If the target player leaves the building and a Banshee begins a hunt, all bets are now off. They now have the ability to hunt freely if their target cannot be reached.

What this means for players is that identifying who is the Banshee’s target no longer means you are safe. Previously, untargeted players did not have to worry about being killed during hunts. They could freely take pictures of the ghost or complete other objectives. Now though, there is a good chance that they could die.

This update will certainly make the game more interesting when playing against a Banshee. Have you encountered one since this update? Let us know your experience in the comments.