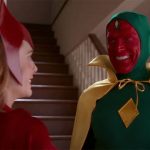 You are reading
WandaVision: Monica Rambeau and That One X-Men Character

The sixth episode of WandaVision has been released on Disney+ this weekend. From Monica Rambeau to the Hex, this article touches on a little of everything. If you haven’t then don’t read this article. It will include some spoilers and at least a couple of terrible ideas. I was also wrong about that one X-Men thing from last week.

The intro video was just too funny, it perfectly captured the 90’s feel from Malcolm in the Middle. Marvel did a great job using Tommy and Billy as a part of the driving narrative in the episode. They don’t know that this world they were created in is a lie. Everything to them is this kinda perfect world. Since everything Wanda creates in the Hex is real, what will happen to these two in the future? Will these two even make it to the end of the series? At some point in the next couple of weeks, we should see them age up again.

This is not that X-Men Characters

Adding Evan Peters as the non-X-Men version of Pietro was fantastic. He did everything we needed as fans. Not only causing Wanda to tell us how this all started, which she doesn’t fully remember. This really caused a huge stir last week, especially since some of us thought this would lead to some more mutants showing up. Instead Quicksilver is just the same one that died in Avengers: Age of Ultron.

The episode might give us a reason he looks like this. Kick-Ass, super-hero movie that includes both Evan Peters and Aaron Taylor-Johnson, was mentioned more than once.  At some point, this movie could exist in the Marvel Cinematic Universe, a movie that both siblings watched together? I feel like I’m reaching a little on that one though. Another idea that is floating around is that he’s a villain in disguise. Either Mephisto or even Nightmare, have been talked about being in the show for some time. I’ve seen some things running around the internet that might imply we will see this “villain” in next week’s episode. It seems like a stretch at this point. I guess we will have to wait and see if Wanda is really just the one being considered the villain.

Monica Rambeau is turning into a superhero. Wanda is changing the DNA of everyone that is inside the Hex. She is doing what I said last week would happen. A reverse House of M is happening, she’s creating mutants or superheroes/villains. After Darcy discovered that Monica’s DNA has already changed, she prepared to fight to save Wanda no matter what. WandaVision is the start of her origin story.

Seeing the Hex take over more of the area around the town was shocking. Wanda was forced to push the boundaries out further while Vision started to die again. He pushed through the field to the outside. I think it’s safe to say that he will not last outside of Wanda’s power. He’s truly dead at this point. Since S.W.O.R.D. has had his body for five years it’s time to see what they have created. I thought that this idea was a little farfetched, that is until I thought about The Visions. The other comic that the show is supposed to be based on. I think we are going to be seeing some other synthetic creatures coming to Westview in the next few weeks. Director Hayward is hiding something from everyone, it seems that they made something he didn’t want anyone to see yet. Darcy discovered this important information right before she was captured into the Hex.

Speaking of Darcy getting captured in the Hex. Turning all the military into clowns was just too much. I laughed so hard at that moment. Even though it was a serious moment where Wanda was trying to save her husband again. Luckily Monica and Jimmy Woo survived and stole a vehicle. How did they get that vehicle or why was Darcy not with them? That I won’t talk about. Some things are just meant to be enjoyed during this show. The big cameo wasn’t Evan Peters, it’s the person that Monica and Jimmy are going to see. I’m thinking that this Aerospace Engineer that has her vehicle is the one and only Reed Richards. I could be wrong on that one.

With only three episodes left I have to believe that we will see a certain Doctor showing up in the show. WandaVision is connected directly into the events of Doctor Strange in the Multiverse of Madness. I know most of this article probably won’t have any truth to it. The fun thing about this show is all the fan theories running around. I do think I was right on the House of M theory, I won’t give up that one.