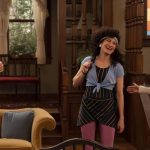 You are reading
WandaVision – Thoughts on Vision and Quicksilver

Episode five of WandaVision has been unleashed on Disney+. The dynamic of the episode has defiantly changed after the events in the fourth episode. This article is going to contain spoilers. If you have not watched the show, do so, then come back to this page for a discussion on the spoilers.

Wanda seems to be in full control of what is going on around her. The grief from the death of Vision is defiantly fueling her desire to recreate a reality that he is alive in. We still do not have a confirmation on the usual villain in the show. Fans need to realize we might never get one. What if Mephesto does not show up in this show? What if Wanda is the villain? Her actions are starting to point to the fact she may be considered the villain of WandaVision.

Everything has been a part of her mind. Nothing really has been an outside influence unless you count FBI agent Jimmy Woo taking to her through the radio. I understand that Agnes is a character who really knows what is going on. In fact, all the townsfolk know that Wanda is controlling them. I see plenty of holes in the theory that this villain is coming to WandaVision.

Who is Controlling Wanda?

Those commercials are telling us a story. Each one is a small piece of Wanda’s mind. The most recent one for Largos shows that there is no higher power controlling her. If you do not understand, Largos is where she could not control her powers. She was not able to stop that explosion from happening. That her powers from the Mind stone have really taken over. Everyone is comparing her to her comic book counterpart.

One thing people are forgetting is she is still new to her powers. As you can see what she has caused, she does not seem to have a full grasp on what she can do. She seems to be fighting herself during WandaVsion. At some point, she seems to realize what she is doing is wrong.

What happened in episode four was something we had not seen yet. We witnessed firsthand how the vanished started coming back. Wanda went from watching Vision die to wake up and his body was gone. That is the first thing that happened to her. Even if we do not see it, that is really what Marvel did without showing Wanda. Monica woke up looking for her mother, the panic was instant. I think we are forgetting that Wanda has had no time to process what happened to Vision.

We still do not know how much time happened from Hulk’s snap to everyone waking up and realizing they need to fight Thanos again. Since all those that disappeared did not have any idea that five years had passed, Wanda is actually in her right to still feel this grief. Three weeks is not enough time to get over that grief. Remember that all the time that has passed since we first witnessed Monica get sucked into the “Hex.”

Now that Vision is starting to become aware that something is wrong, he does not know where he came from. His memories before his death are gone. Everything is starting to get weirder for him. At some point, he might figure out that he should contact the outside world. In the episode, Vision sees an email from Darci that continues the confusion of what is going on.

It did not help that he little broke the rolling credits to fight with Wanda over what is going on in Westview. If you watch all the previews, we do see Vision pushing through the boundary that holds everyone in. Since everything that Wanda creates is “real,” does this mean we have a new Vision? Will he look like he did before the Mind stone was ripped from his head? Or are we getting the Night of the Living dead version? It seems that Vision will continue down a path of frustration and confusion.

One last thing happened in this episode; Something so monumental that it could change all of the MCU. Not only are her kids growing up at super speed. Their uncle showed up at the end. The thing is, it was not the one we watched die in Avengers: Age of Ultron. Evan Peters’ X-Men version of Quicksilver showed up at the front door.

Think about that for a second. A mutant from another universe showed up in the MCU. Magneto’s son is now a part of the MCU. Bringing a character from Fox’s X-Men series subtly and quietly is amazing. Most of us thought that it would be in some larger-than-life moment in one of the movies, not in a sitcom about two Avengers. I feel like this is going to be a reverse House of M. Instead of no more mutants, the mutants will slowly start to show up in the MCU. WandaVision could be the start of the greatest stories told so far.

Some fans online are saying that the cameo of Evan Peters Quicksilver has something to do with Agnes. She was around the family when the kids asked about her brother Pedro. Wanda did not say that he was dead, but rather he was far away. I just think that we do not know enough about the Agnes character to keep using her as an excuse. Wanda possesses some insane amount of power. Remember, it took her seconds to control all of those soldiers.

Did We Get WandaVision Right?

In fairness, all of this could just be wrong. Everything I said might be looking at everything the wrong way. With only four more episodes to go, anything can happen. I mean, we still have not had that Halloween episode that was teased in the trailers.

I know I did not cover everything that happened so far in WandaVision. Some of what people are discussing does not need to be broken down a thousand times. Agnes is still a mystery. When will we see her husband Ralph? Only time will tell.