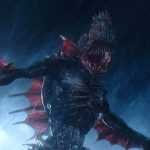 Warner Bros. is having some difficulty with their DC Universe of movies. It seems that two movies that fans were excited about are no longer being made. New Gods and the Horror movie The Deep have both been canned.

James Wan had announced that a spin-off of the extremely popular Aquaman was going to be created. This film called The Deep was going to focus on the horrific area known as The Trench. That film will not be moving forward in the new DC slate of movies.

New Gods would have taken viewers to the worlds of Apokolips and New Genesis. Since Darkseid is in the new version of Justice League, DC was not prepared to have him in that film.

Warner Bros. and DC had this to say about the movies.

As part of our DC slate, some legacy development titles including New Gods and The Trench will not be moving forward. We thank our partners Ava DuVernay, Tom King, James Wan, and Peter Safran for their time and collaboration during this process and look forward to our continued partnership with them on other DC stories. The projects will remain in their skillful hands if they were to move forward in the future.- Hollywood Reporter

It is disappointing to see these two movies have been pushed aside. Thankfully, the door is not fully closed on these movies. New Gods and The Deep could happen at some point in the future. Regardless, fans do have some stellar movies to look forward to in the next couple of years. Take a look below to see:

Do not forget to bookmark Lordsofgaming.net to get all of your gaming and entertainment news. Let us know how you feel about these two movies being dropped in the comment section below.