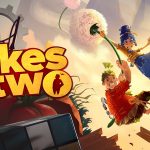 You are reading
It Takes Two Review

Popular game director Josef Fares and Hazelight Studios have built up a strong reputation for developing co-op video games. Their first title, A Way Out, set out to find that sweet spot of unifying story and gameplay. With It Takes Two, Fares’ ambition is paying off in spades. It Takes Two is co-op perfection, pristinely delivering the kind of experience only video games can offer.

Magical Tears and The Bitter Couple

It Takes Two kicks off its tale when the bitter married couple, Cody and May, both proclaim their upcoming divorce will settle their relationship issues. Fortunately, their daughter Rose overhears their conversation and takes action… sort of. Wishing that her parents would remain close, Rose cries onto dolls resembling her parents. Soon after, Cody and May wake up in new bodies – the very same dolls Rose cried on earlier. A relationship-therapy book named Dr. Hakim explains to Cody and May the only way they can reach Rose to get back to normal is to fix their loveless relationship. 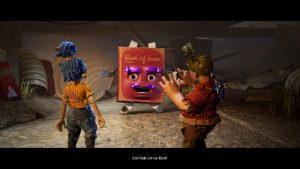 At its core, It Takes Two turns a mature and honest lens onto real-life relationships. Sometimes, life gets in the way of love, and that has a major impact. May is a workaholic providing for her family, but she is never home to give that much-needed interpersonal support to Cody. Cody, on the other hand, does not show appreciation for May’s diligence, but feels lonely and underappreciated for his efforts. With obnoxious pushes to “col-lab-or-ate” from Dr. Hakim, the two begin to begrudgingly work together. From there, Cody and May charge head first into an absolutely insane adventure filled with laugh-out-loud moments and an unforgettable co-op gaming experience.

It Takes Two Is Co-Op Perfection

It Takes Two is a complete co-op game from beginning to end, fully prioritizing the 2-player experience. One player will control Cody while the other will play as May in a split-screen couch co-op mode. For players with some distance between them, one player who owns the game can invite a friend to join them for the entirety of It Takes Two for free. That’s right – One copy, two players, and all the fun this title has to offer. 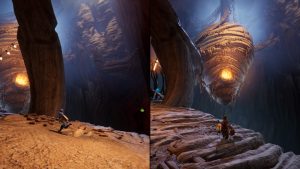 This bombastic adventure takes Cody and May to places only a truly wild imagination can conceive of. Aiding a colony of squirrels in their war against wasps; solving puzzles in the deep weirdness of space; surviving in a toxic-filled garden come to life; and more. All of the locales are visually gorgeous with its 3D animation similar to the delight of a Toy Story film. The places you will visit and the narrative strings are tied to the co-op gameplay. Both players will fulfill the giver and receiver roles to complete puzzles and platforming areas. While this type of gameplay has potential to become stale after some hours, It Takes Two stays true to keeping gameplay-to-gameplay moments fresh and exciting.

Imagination Has No Limits in It Takes Two

After making a deal with the comically militant squirrels to take care of the wasps, Cody and May are given weapons. Cody’s gun shoots a sticky substance that can explode when ignited. And, of course, May is given a weapon full of match sticks, serving as a rocket launcher. Encounters throughout the level are shaped around that combination where Cody and May have to use their specialties to reach their goal. The entire chapter is peppered with co-op puzzles, platforming sections, and boss fights that kept my co-op partner and I in constant suspense. 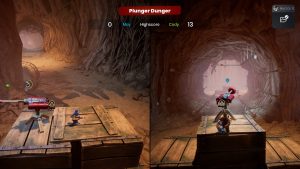 During the space-themed level, we definitely had more than a few “Ah-ha!” realizations maneuvering between challenging anti-gravity mind teasers. There were even fist-pumping moments of triumph as we took down epic-scale bosses together. In addition, each chapter has a number of optional competitive minigames for Cody and May to take on. From racing to carnival-like shooting galleries, there are more than enough distractions throughout to take a quick break from the story if you choose. You will not miss out on any crucial story moment if you do decide to skip them. Only some fun competition between you and your playing partner.

During the 10 – 15 hour story campaign, there was never the feeling that one player was doing all the work. Cody and May are given specific roles to play in each chapter, but both are equally important to achieve success. This makes playthrough number two even more enticing since Cody and May offer different gameplay experiences. It Takes Two is a font of original gameplay ideas that truly takes two. It only gets better the more you play. 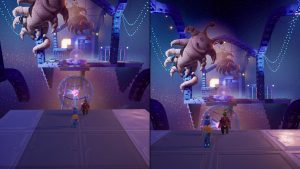 At first, I was worried Cody and May’s journey to reconnect intimately would feel rushed or, at worst, pointless. However, the story’s climax not only had a satisfying end, but one that felt earned by both the characters and the players after all they went through. It Takes Two attains Fares’ focus to have narrative and gameplay in unison rather than separate entities. Full of laughter, surprises, and addicting gameplay, It Takes Two is one of the best games of 2021 so far. Everything about It Takes Two is completely wrapped in creativity and passion that cement it as a timeless masterpiece.