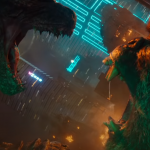 You are reading
Godzilla vs Kong Easily Dominates the Box Office

Godzilla vs Kong has easily taken the top spot at the box office. This Monster Universe movie had no problems grossing an impressive amount of money during the pandemic. All the other films couldn’t gross over $4 million separately at the box office.

Godzilla vs Kong grossed an estimated $48.5 million since it was released on March 31st. Around $32.2 million of that was just from this weekend alone. In addition, the film also performed well in the foreign market. Godzilla vs Kong released last week in international theaters and grossed a whopping $236 million. Currently, the worldwide total is $285 million and should easily hit $300 million in the next few days.

This is extremely impressive given the times we are in right now. Also, this film is available to watch on HBO Max at the same time it’s playing in theaters. I was hoping to see a little more than $150 million worldwide, with this total we may see more movies and a few shows come out from the Monster Universe.

The Unholy also released this weekend. It was able to bring in an estimated $3.2 million at the box office. This horror film barely topped Nobody, which grossed an estimated $3 million. At the moment, Nobody is sitting at $11.8 million domestically and $9.2 million internationally. That gives this movie a worldwide total of $21 million. Raya and the Last Dragon dropped down to fourth with $2 million. Disney’s latest animated film pulled in $86 million worldwide.

Look for Godzilla vs Kong to continue to dominate the box for a few more weekends. Mortal Kombat was pushed back until April 23rd. This will give these two titans another week to add some money. Voyagers is the next big release when it comes to theaters on April 9th. If you enjoyed Scott Pilgram vs the World, that movie is getting a tenth anniversary rerelease in theaters. The COVID-19 pandemic halted the movies original celebration.