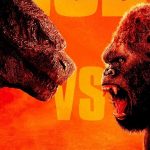 You are reading
Godzilla vs Kong Trailer is Here

The trailer for Godzilla vs Kong has finally arrived. The jaw-dropping trailer shows what’s going to happen when these two titans face off in battle. Thanks to Warner Bros. Pictures and Legendary Studios we won’t have to wait much longer to see this movie.

As you will see in the trailer, Kong has a heart. This titan is here to help defend those that can’t defend themselves. It was sad to see him changed up in captivity. Take a look at the trailer below for Godzilla vs Kong.

This is the official synopsis that was on Legendary Youtube page:

Legends collide in “Godzilla vs. Kong” as these mythic adversaries meet in a spectacular battle for the ages, with the fate of the world hanging in the balance. Kong and his protectors undertake a perilous journey to find his true home, and with them is Jia, a young orphaned girl with whom he has formed a unique and powerful bond. But they unexpectedly find themselves in the path of an enraged Godzilla, cutting a swath of destruction across the globe. The epic clash between the two titans—instigated by unseen forces—is only the beginning of the mystery that lies deep within the core of the Earth.

Fans will be able to watch this movie on HBO Max and in theaters on the same day. The movie will be out on March 26th. It looks like most of us will be watching this movie online. Just remember that the movie will only be available for a month on HBO Max. There still hasn’t been any real announcement on what happens after this movie.

The MonsterVerse has just been these past few movies since the release of Godzilla in 2014. I really would like to see something in the terms of a TV show. There really is more than can be told about the titans. It will be exciting to see what this mystery really has caused Godzilla to attack the globe.

Take a moment and bookmark Lordsofgaming.net for all of your gaming and entertainment news.

The Witcher Season 2: Everything We Know