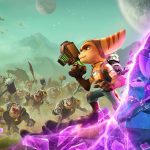 Insomniac Games has just released a new trailer for Ratchet & Clank Rift Apart, which introduces Rivet. This also comes alongside an announcement for a new, State of Play coming this week.

Coincidentally, the trailer offers a new look at story, gameplay and the name of our female lombax. Ever since the game’s reveal in June, Insomniac has teased fans with the characters name. Now, we know the mysterious female lombax is named Rivet.

Rivet is a resistance fighter from another dimension. Through the gameplay trailer, we also have confirmation Ratchet & Clank Rift Apart will allow players to play as Ratchet and Rivet.

As expected with the Ratchet & Clank series, Rift Apart continues the incredible visual prestige. Crazy gadgets, enthralling worlds and the quirky characters within, all remain intact.

PlayStation has confirmed a State of Play will debut on Thursday, April 29 at 2pm PT / 5pm ET / 10pm BST. This State of Play will show off more than 15 minutes of gameplay for Ratchet & Clank Rift Apart, alongside updates on a few indie titles. Over on the PlayStation Blog, we know Mark Mothersbaugh, lead singer of Devo, will compose the score. 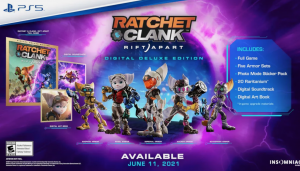 Facebook Twitter Google+ LinkedIn Pinterest Tumblr
Previous article Who Is Going To Make All Of These PS VR2 Games?
Next article Lost Soul Aside Receives A Barrage of New Gameplay on PS5