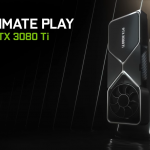 Graphics cards have been quite the hot commodity in the PC building and gaming community for the past couple of months. With chip shortages, as well as the booming cryptocurrency market, it has become increasingly hard to get a GPU for a reasonable price to performance value. With low-end cards fetching high-end prices, many PC enthusiasts are beyond frustrated with the current situation. However, it appears that Nvidia will be bringing a new line of cards to market this month that will hopefully fall into the hands of eager players who have been struggling to find an upgrade. (Although scalpers and crypto miners will be more likely to get their hands on them, unfortunately.)

Today, via a blog post and a handful of new videos, Nvidia showcased their brand new RTX 3070 and RTX 3080 TI cards for the first time. Starting with the Nvidia RTX 3080 TI, which boasts running speeds of 2x as fast as a 1080 TI, as well as 1.5x faster than an RTX 2080 TI at 4k resolution. While the RTX 3070 TI boasts 1.5x the speed at 4k than the last generation RTX 2070 Super, which released back in 2019. Now if you are less about the technical and more about seeing these cards in action then say no more. Nvidia showcased the RTX 3080 TI with possibly one of the most stunning games available on PC, which is of course Doom Eternal from ID Software. Showcasing Doom Eternal running at 4k with Vulcan raytracing, as well as powered with Nvidia’s performance-enhancing DLSS technology. Doom Eternal has never looked this good, which is honestly saying something.

The RTX 3080 TI is Nvidia’s flagship card that will be the company’s main draw to the PC enthusiast market. However, it does come with a rather beefy price tag clocking in at $1199 USD. This is a heavy price for performance, and while it slightly outperforms the 3090 in certain areas, it might be hard to justify for some PC players. However, the RTX 3070 TI will officially be released at $599 which puts it firmly in between the price of an RTX 3070 ($499 USD) and an RTX 3080 ($699 USD). This will offer a variety of options for those looking for a high-end card, and give players a variety of slight variations to choose from based on what performance they are looking for. The RTX 3080 TI is will officially be launching on June 3rd, while the RTX 3070 TI will be released on June 10th. If you are still on the hunt for a brand new GPU for your PC this might be your latest opportunity to get one. However, scalpers will undoubtedly be at play during this launch, so here’s hoping that these cards fall into the hands of players.

Will you be trying to purchase a RTX 3080 TI or a RTX 3070 TI? Let us know in the comments and don’t forget to check back for the latest gaming news and information.