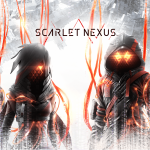 You are reading
Scarlet Nexus Review 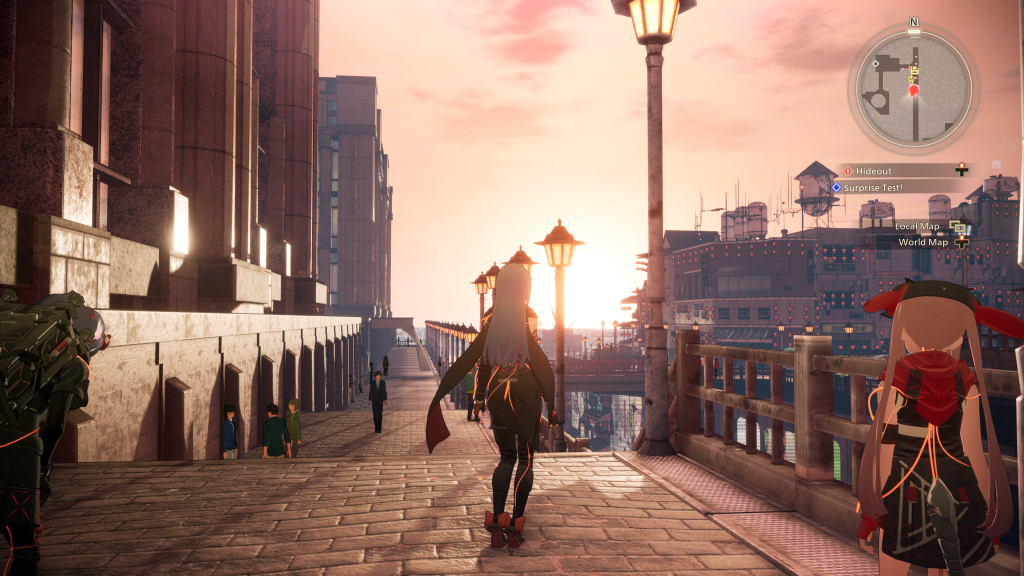 Scarlet Nexus is an action-based JRPG co-developed by Bandai Namco and Tose co. LTD. In Scarlet Nexus, you can choose from two characters, both telling their own side to the main story. Though both characters are up-and-coming cadets in the special task force (OSF), they could not be more different personality-wise. Kasane is stern, cold, and seemingly emotionless throughout the game. Yuito, in contrast to Kasane, is upbeat, talkative, and generally expressive. The personalities really make both of these stories unique, even if the overall story is disappointing.

What Begins with Intrigue, ends in Discontent 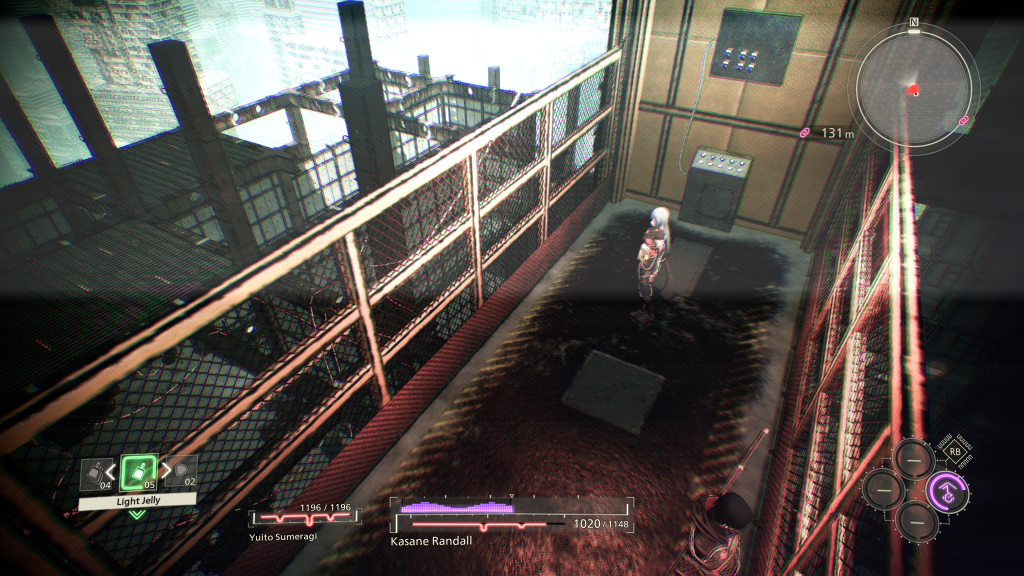 Scarlet Nexus takes place in an alternate reality version of our world where the OSF has to ward off otherworldly creatures known as “Others”.  As part of the OSF, Yuito and Kasane are sent to various areas to take down Other targets with their respective squads. Throughout the story, you will uncover the origins of Others, explore various locales and cities all while investigating conspiracies involving the OSF. All the heavy plot points are broken up by some downtime in a hideout that serves as a place to take intermissions between story chapters. In the hideout, you can buy equipment, or lightly explore previously discovered areas and chat with teammates.

For instance, in one mission, two of Yuito and Kasane’s close comrades go missing. The squads split up with each searching for one of their missing friends. While this was an engaging situation for their stories in the beginning, the resolution of this plot thread is a bit of a dead end. It is these kinds of very unsatisfying ends to interesting stories that leave a sour taste. The game feels like many interesting premises with lots of build up time, but that build up time quickly morphs into a waste of time.

This was not the case for all other conflicts, but none of them leave an emotional impact. This left me wanting a much better story with all of its various plot threads that worked to leave an emotional impact. However, the character performances in the game were not disappointing. Consistently good voice acting with side characters that kept me guessing at their motivations help keep you invested.

The same can not be said for the music, which only has three truly memorable tracks, and they are not memorable for the same, or necessarily good, reasons. The best is in the opening city which has a chill techno vibe to compliment the setting. The second is a song by the band, Oral Cigarettes, and you will become very familiar with its beats as it is used in the opening animated scene that is played every time you load up the game. The final one being in the story intermission area, if only because you spend a lot of time there.

With a Little Help from your Friends 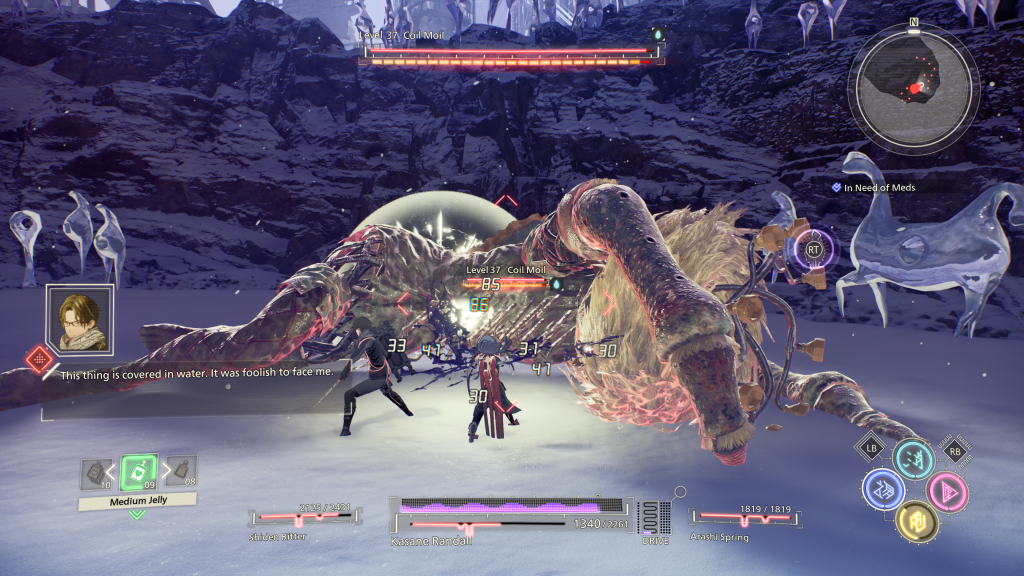 Despite the story’s shortcomings, the combat of Scarlet Nexus is incredibly satisfying. My playthrough was on normal as Kasane, whose playstyle is more strategic. Her kunai attacks are all area-of-effect, always going out to a certain range. They can feel pretty unimpactful until you start to synergize with your teammates. In combat, you will always have two teammates that will fight with you, but you will also always have two others on standby.

Each teammate can lend you unique enhancements to your attacks, such as adding electricity or duplicating your attacks. Some enemies will be weak to electricity, and some can only be damaged by utilizing other teammates’ powers. Some flying enemies can only be hit when you slow down time with one of your teammate’s powers, while others can be quickly staggered with invisibility. There is never an end to the variety given to you. This is an incredible combat system that keeps every component stitched together perfectly. I loved combining the powers of my teammates and finding new interesting ways to stagger them.

When enemies are staggered from using your teammate’s powers, you can press a button to instantly finish them. This stagger can come easily by exploiting weaknesses or getting the jump on enemies. Layered on top of this are abilities to summon teammates to you instantly with a swift attack for the enemy. A button prompt will appear to let you summon them and can be used to avoid devastating attacks from enemies. So much can happen in battles that it might feel overwhelming at first. But you will quickly get used to the rhythm and visual cues to achieve pure satisfaction. 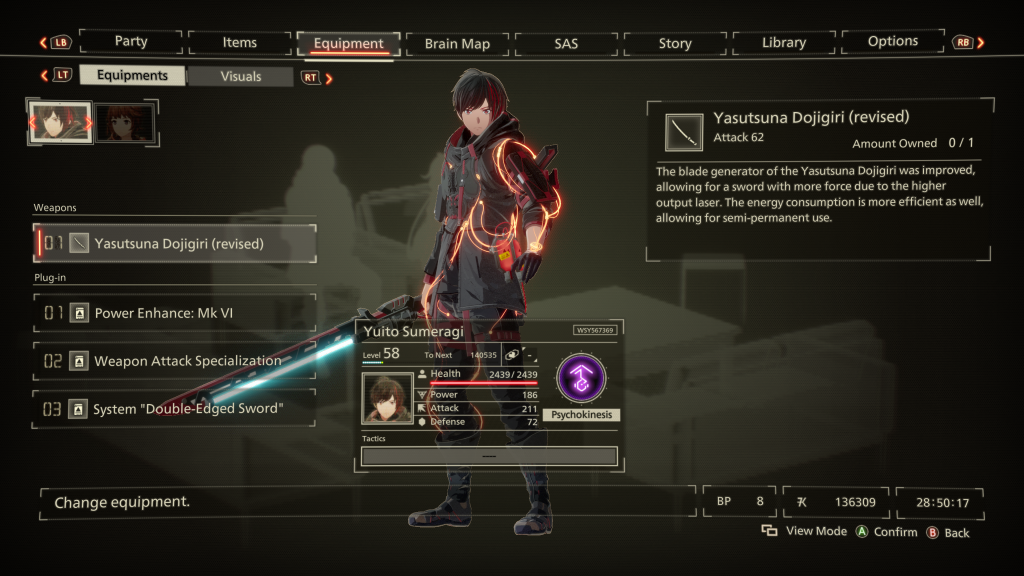 However, as well as the base combat works, the customization for you and your comrades does not. Every single character is limited to one specific weapon and up to three equipment slots. Equipment is limited to small upgrades to attack power, defense, elemental defense, and health. While weapons do get visually impressive over time they sadly only get incremental upgrades to damage, with no options to add elemental damage to them. There was never a moment when there was excitement nor conflict about upgrading these characters. 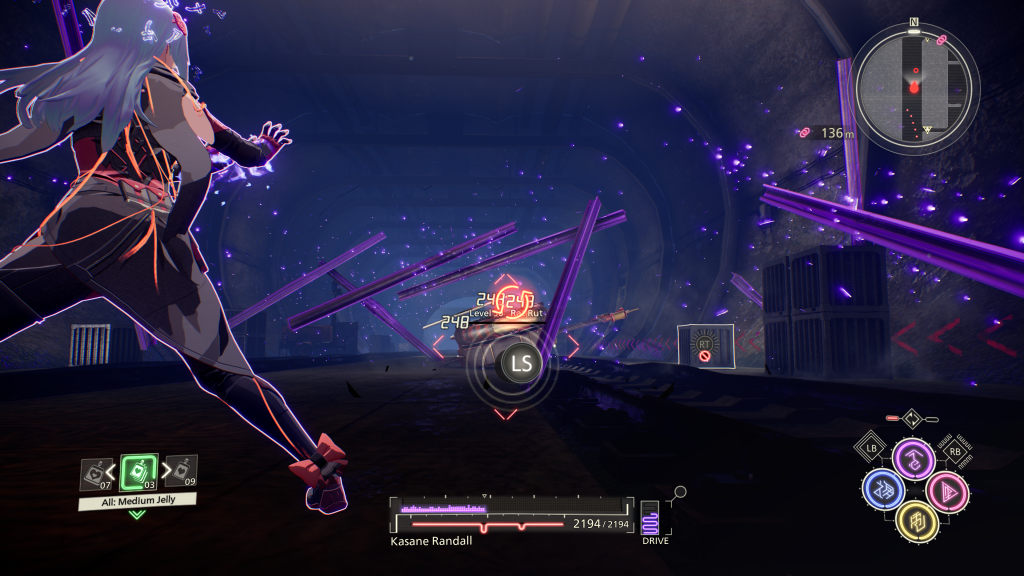 One of the key components of combat outside of teammate synergy is the “Psychokinesis” both Kasane and Yuito have. This grants them the ability to use the environment as a weapon. Everything from chairs, to cars, to vending machines and chandeliers, every level offers seemingly unlimited objects to pick up and throw at enemies. There are even certain objects you can use in unique ways. Stacks of steel beams can be spun with the left stick into a crowd to slowly kill them, or you can hop on a bus and steamroll down a highway. It definitely feels cool and is a welcome addition to the combat. It gives you either a minor smirk on your face or makes you laugh from the sheer hilarity of it all. 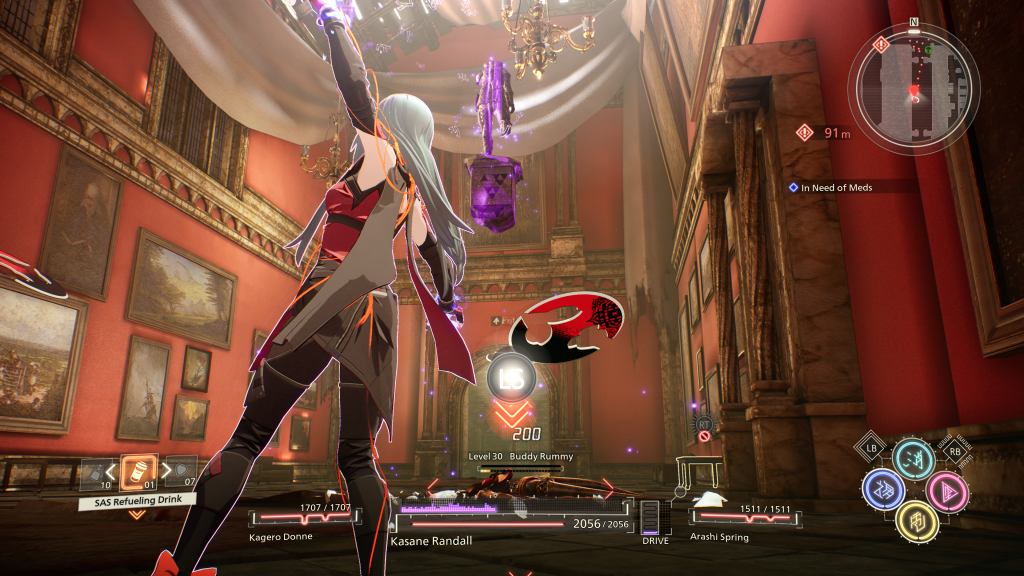 Adding to this unique mechanic is the “Brain Drive” that can be activated from your performance in combat. This will enhance the experience you get from enemies by simply just defeating them. This further offers bigger boosts from stagger kills. You will always be aware of when it activates and how long it will last via a meter near your health. Once you reach a certain point in the game you will also unlock an enhancement to brain drive that serves as a god mode. Triggering this will allow you to deal massive amounts of damage with unlocks in the game’s skill tree to make you invincible. 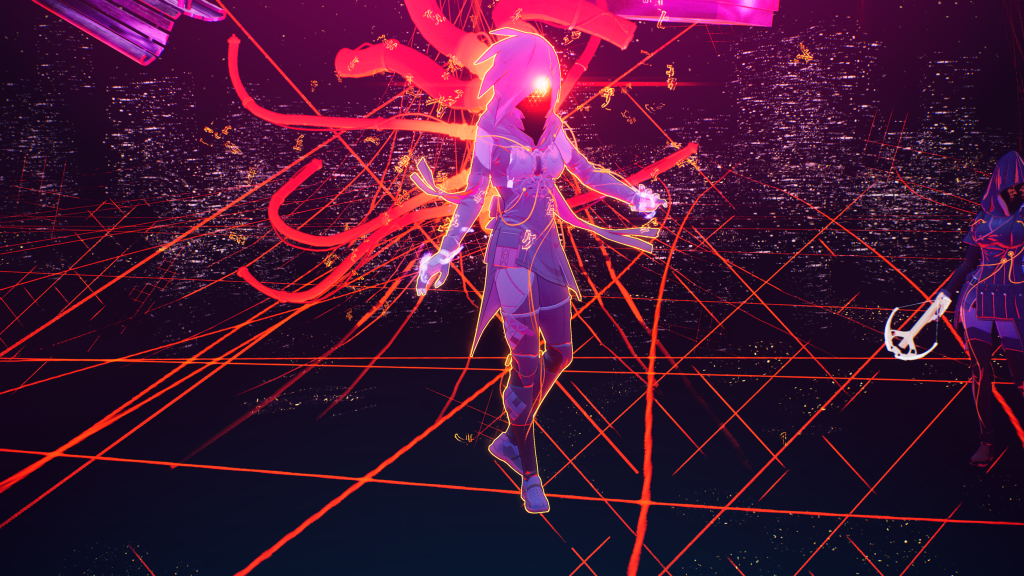 These mechanics kept me engaged with the gameplay outside of the teammate synergies. They felt immensely satisfying and fun to use on a consistent basis. Every level offers up unique enemies to take down with both forms of combat and environments which offer so much potential with psychokinesis. You will never find yourself bored of the combat in Scarlet Nexus.

In a big and complicated game like Scarlet Nexus, it is expected to experience numerous technical issues. However, in my playthrough of the game, I experienced almost no noticeable bugs outside of depth of field issues. This was played on the Xbox Series X, where the game stayed silky smooth and crystal clear. There was one hiccup at the end where the game was supposed to slow down and play a scripted sequence. The trigger took forever while I was watching two characters move incredibly slow which was odd. However, to its credit, the game never crashed. 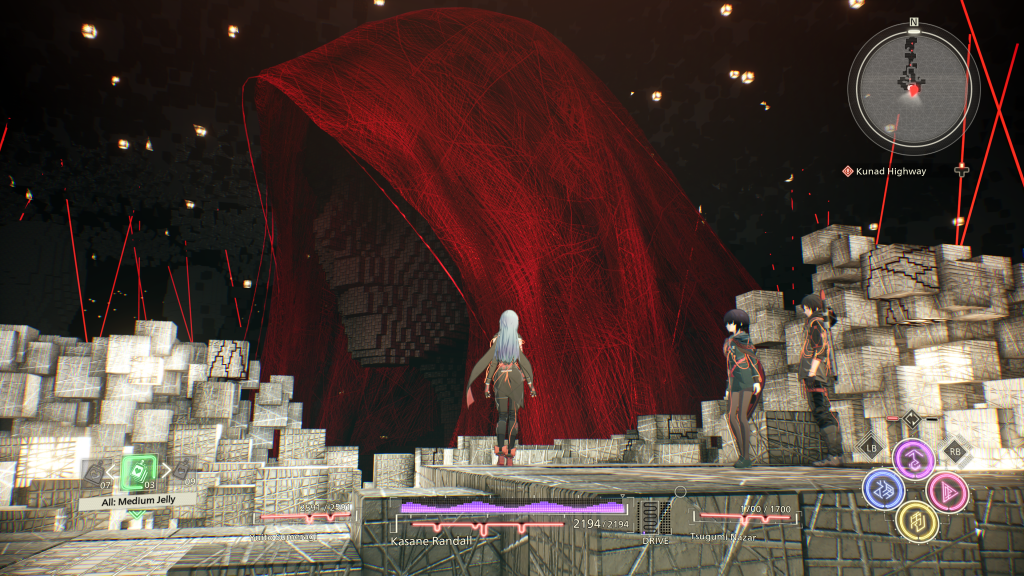 Alongside Scarlet Nexus’s technical performance was a strange presentation for the game overall. The game sports a frosted cel-shaded art style. It definitely thought outside of the box with certain environments being stunning and insanely detailed. Seeing incredible backdrops in certain levels and walking around in cities or highways with holographic signage, road splitters, and sidewalk paths will always stick out visually. However, immersion can break when you notice objects you can use with psychokinesis popping into existence along the way in more open levels. 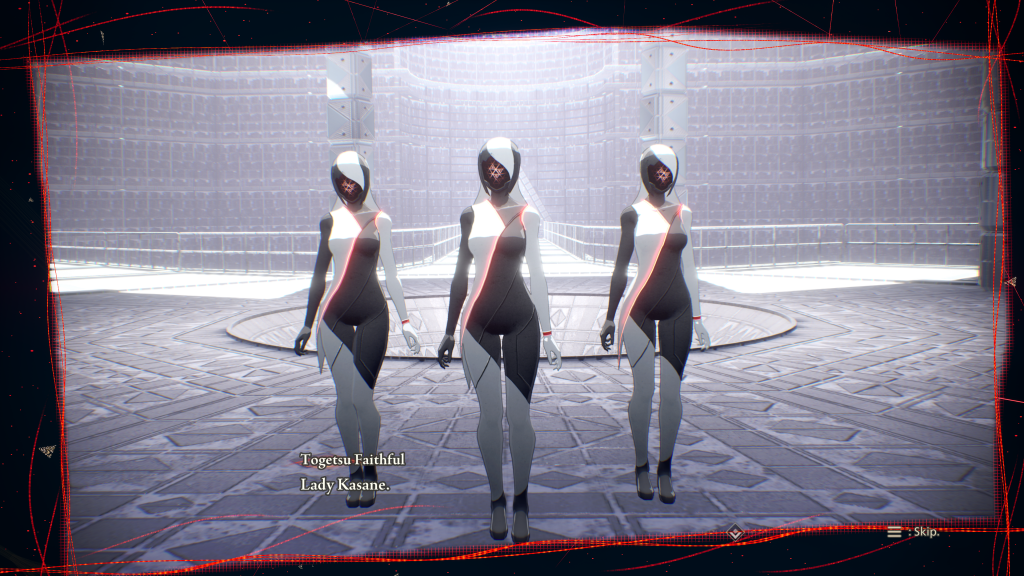 The final issue with this game is a lack of interesting presentation for character interactions. It uses manga-style panels for a majority of interactions with very few animated cutscenes in-between. Moments that were animated felt jarring, while some paneled moments felt like they could have been animated instead. Picking a style and sticking to it would have been significantly preferable to the mishmash they chose.

Scarlet Nexus, while disappointing in the story overall, is saved by its relentlessly enjoyable combat. The Japanese voice cast did a superb job, even if the English voice acting was not particularly impressive. The levels, while offering stellar visuals, were too linear and never offered any interesting reason to return to explore. It feels like for every great part of this game, another lacks to a noticeable degree. Even so, Scarlet Nexus is worth the money if you are looking for a decent 25+ hour experience.

Scarlet Nexus is available on Xbox Series X and S, Xbox One, PlayStation 5, PlayStation 4, and PC for $59.99 and a deluxe edition including alternate character outfits, the soundtrack, and artbook for $79.99.