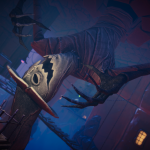 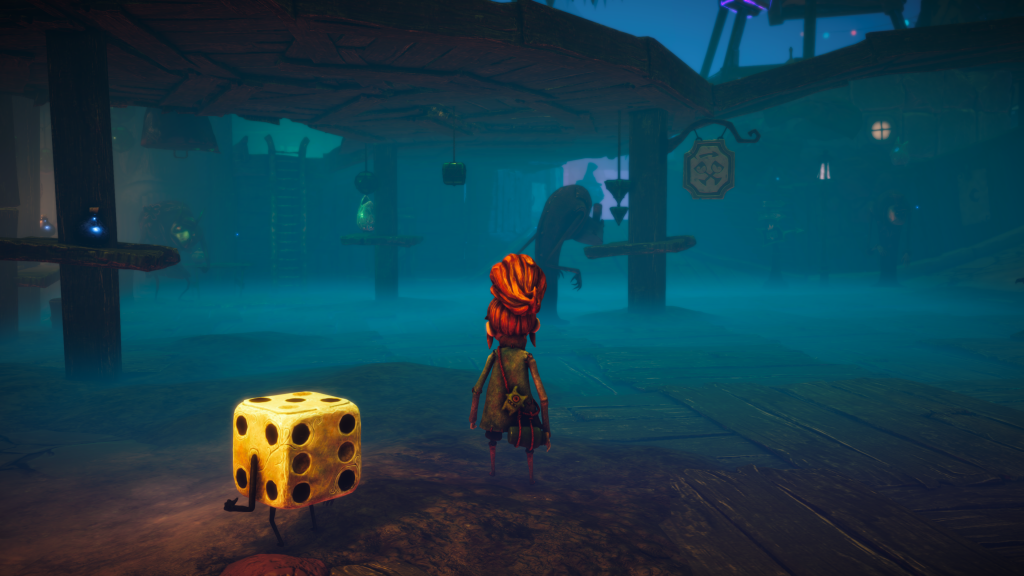 Lost in Random is a tactical, third-person action-adventure game developed by Zoink Games. With six sides of a die, come six nightmarish villages in the kingdom of Random. When your sister is taken from you by a menace of a queen, you must risk your life to get her back. With just a walking die as your companion, you must traverse the twisted streets that lay before you. A mysterious dice, haunting nightmares, and a visage of your sister now evil. Is this a simple rescue or something much darker?

The Last of Dice

Lost in Random has one of the more unique premises for a game that I have seen in some time. It opens with two young sisters, Even and Odd, playing in the slums of the town of Onecroft. It is a big day for Odd, the older sister, who is preparing to be judged by the Queen of Random and her die before the day ends. This judgment becomes quite the unfortunate turn of events when Odd is selected to join the Queen in Sixtopia, taking her from the dreary slums to a much better life, with Even left behind. Fast forward a year and Even has a nightmare of her sister’s new life. Shaken from seeing Odd in distress she decides to follow a mysterious ghost outside of Onecroft. 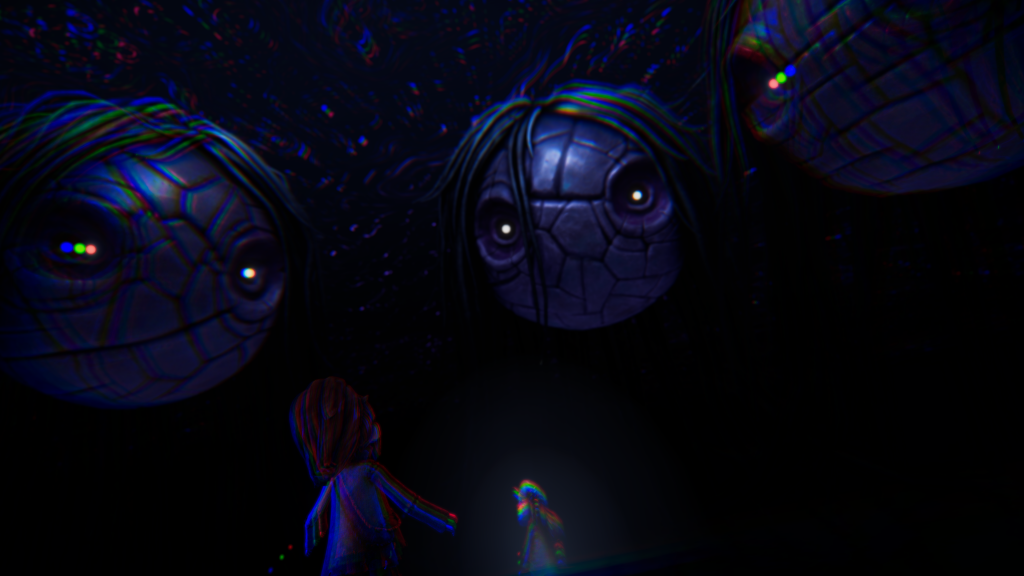 Believing in her heart that this ghost would guide her to Odd, she follows it out of Onecroft into the world beyond. However, she soon finds herself alone and stumbles into a forgotten land filled with decayed dice. It is here she finds Dicey, a relic of times long gone,  that helps her escape an ambush by the Queen’s minions. Dicey hails from a time when dice wielders were plentiful and imbued with magical energy from the dice. Now, this bond is forged anew with Even, as she braves the nightmarish cities of Random on a mission to save Odd from the Queen.

The story of Lost in Random is a whimsical and eager one. Building up its world with incredible cities that have wonderfully unique narrative themes to compliment them. Locations such as Two-Town housing citizens with dual personalities and Threedom under a three-way siege between siblings of the king are instantly memorable. Getting lost in Random with its many bipedal rats or fish characters inhabiting the narrow streetways filled me with wonder. Who are some of these creepy yet friendly people, what stories do they have to tell? It kept me enchanted in the world and engrossed in its clever writing as I witnessed the darker scenes of the plot. 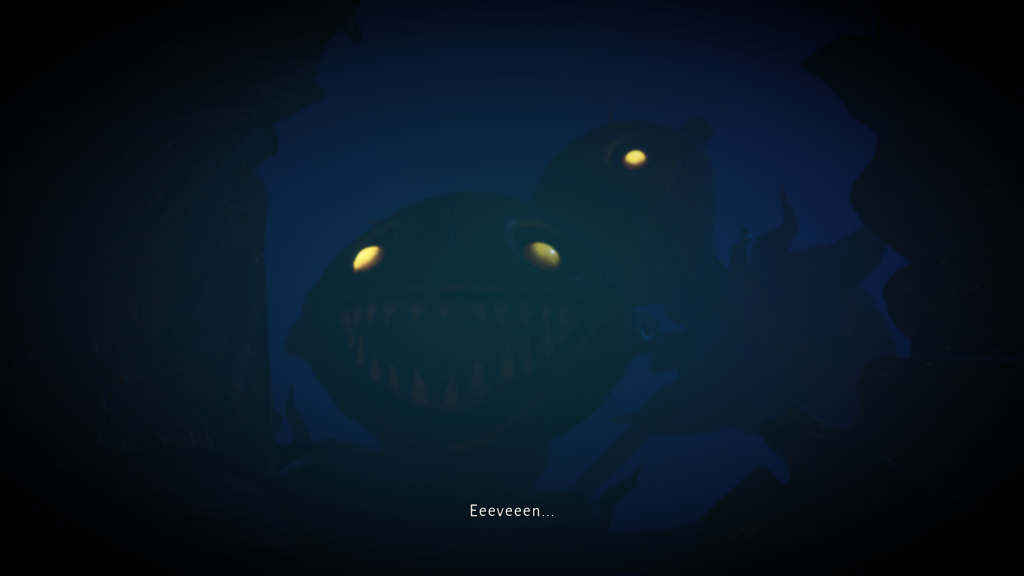 Along Even’s journey, her nightmares get progressively worse. These nightmares show her sister slowly turning evil and how the Queen is invading her mind. At one point the Queen replaces Even’s personal narrator to wear her mental state down, in contrast to the narrator keeping her spirits up. Even changes over time to a triumphant and cocky child even with the betrayals she endures throughout. It is fascinating to experience and all comes together to create a gripping and classic fairy tale story.

The combat in Lost in Random is as fun to play as it is intricate. Each enemy has crystals you can break off with Even’s slingshot. These crystals can be collected by either Even or Dicey and allows you to draw cards from your deck. When you have a full hand you can roll Dicey. Whatever side Dicey lands on will give you points to spend on cards drawn from your deck while the enemies are frozen in place. These can be spent on health potions, traps, such as bombs or giant spinning dice to help eliminate enemies, and weapons, such as bows, swords, and maces.

The different weapons offer unique opportunities for confronting the myriad enemies you encounter.  Ammo scarcity for your bow, combined with melee weapon durability makes it so you have to consistently juggle back and forth between weapons in a way that is satisfying and tactical. This system is supplemented well with the card system. If your melee weapon is close to breaking, a second sword or mace card drawn from your deck can replace a melee weapon close to breaking. 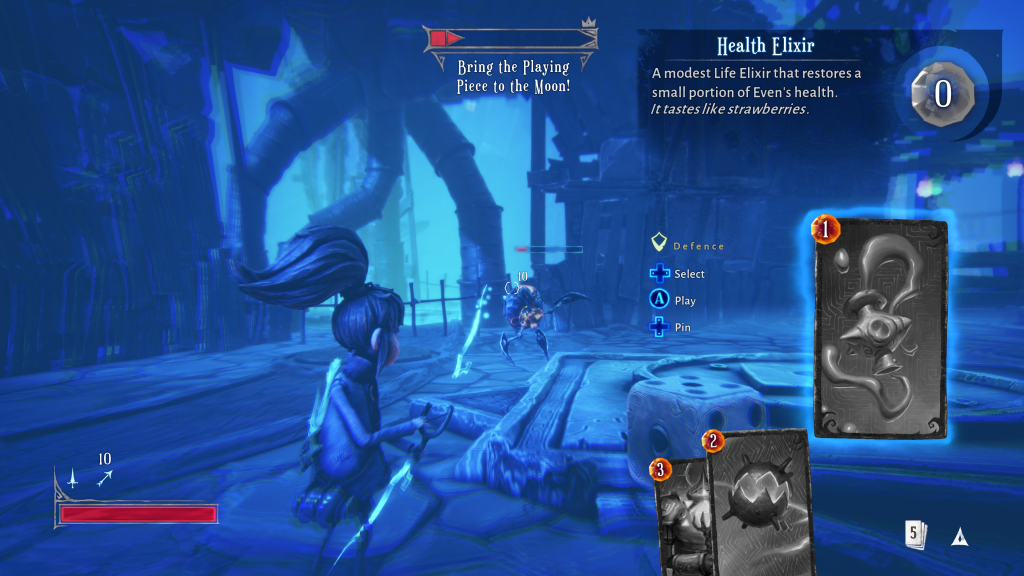 Combat encounters in Lost in Random never feel monotonous. Encounter are broken up by unique mini-games that will block level progress. For instance, in one, a chess piece is placed at one point of an arena, and it is your job to get it to the other end. The catch is that it relies on the numbers Dicey lands on to move it. During these mini-games, you will have enemies attacking you with some that will block the way. Defeat enemies, roll Dicey, and keep the chess pieces’ path clear to win.

The mini-games are a bit hit or miss though. In Threedom, there is a mini-game where you have to land the chess piece on specific tiles on a triangular board to deal damage to a cannon in the middle. At this point in the game, you will only be able to roll up to three. This means you can get the piece stuck in a loop passing the place it needs to land on to hit the cannon. This makes a fun and unique concept into something that is hindered by the randomness of the dice rolls. Every other mini-game worked perfectly in breaking up the monotony of enemy encounters. But it is worth noting, the triangular mini-game in its first and only appearance was unenjoyable, like the few bosses you get to fight.

With six towns come six bosses, in descending order of difficulty. The first boss you get to fight will always stick out to me as the only unique one. He sweeps the small arena with his giant arms, testing how well you can dodge. In between sweeps, you have to defeat enemies and break crystals off to roll Dicey. Knocking off each third of his health initiates a dialogue sequence where you have to finish his rhyme. Each rhyme deals different amounts of damage. After defeating him, I was eager to see how the upcoming bosses would test my skills, only to find they never did. 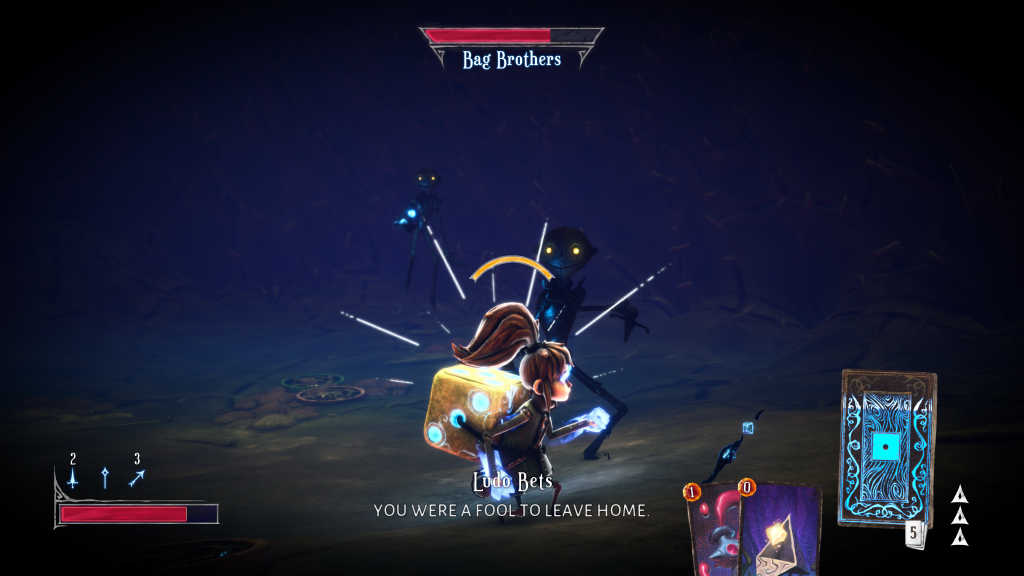 Some bosses stand in place for significant portions of the fight leaving themselves open to easy attacks. While others require only the smallest bit of repositioning and dodging to avoid getting hit. There are no unique mechanics in these fights, making all bosses after the first a disappointment. It’s very rare to see great hack and slash gameplay blended with tactical card-based systems like this with so little to challenge the player. The only reason to explore the variety of cards you can find in levels or buy from shops are the simple encounters. Those will offer much better tests of skill and variety than the later bosses. It is a baffling design decision that left me disappointed.

A Near Perfect Presentation

The graphics of Lost in Random are genuinely stunning and filled to the brim with detail. Houses made in the shapes of teapots, beds crafted like matchboxes, and patched burlaps sacks are scattered throughout the world. These details are accompanied by walls made from dice or plates of metals and ever-growing fog. As a result, it was a visual treat to behold as I talked the uniquely named characters like Uno-Jinx. This was coupled to a silky smooth performance during my playthrough on the Xbox Series X.

There is a strange bit of artifacting though. When exiting the game to the main menu, it shows the game assets being removed one frame at a time. It doesn’t ruin anything for the game but it is worth mentioning since the transition should be smoother. Overall, though the game runs beautifully, and looks hauntingly stylistic. 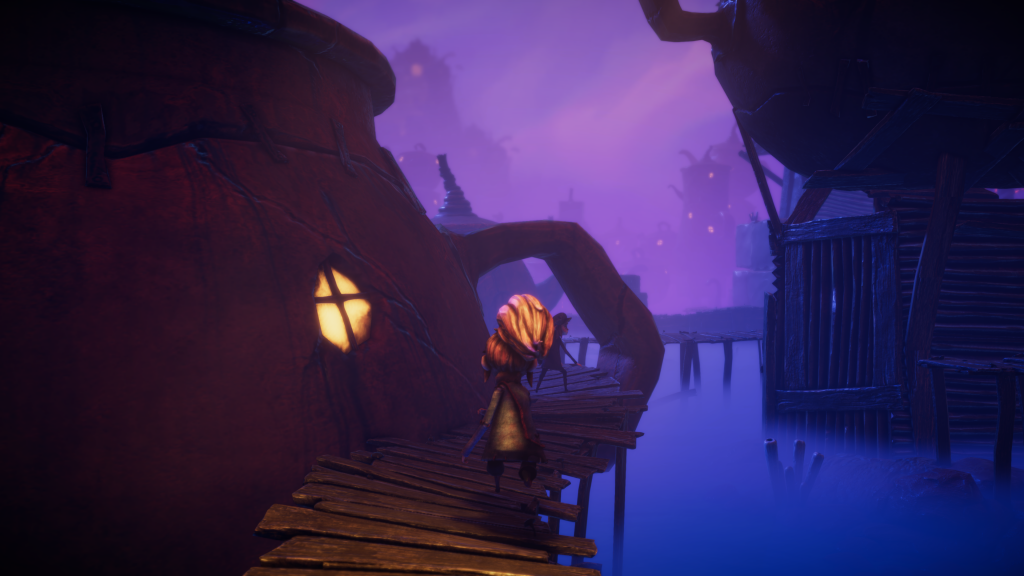 Final Thoughts on Lost in Random

Lost in Random is another example of genuine uniqueness coming from the “EA Originals” program which brought us It Takes Two earlier this year. It excels in creating a nightmarish setting filled with charming characters and dry humor to indulge in its wonderous writing. From a gripping narrative and lovable protagonist to the friends found in the twisted streets. With engaging enemy encounters, intricate combat, and interesting but disappointing bosses. Zoink Games excellently delivers a fun experience that will leave you wanting to dive back in after the credits roll. It will be hard to not want to get lost in Random again.

Lost in Random is available now on Xbox Series X|S, Xbox One, Nintendo Switch, PC, and PlayStation 4 and 5 for $29.99.