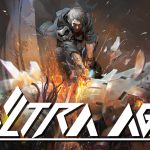 You are reading
Ultra Age Review 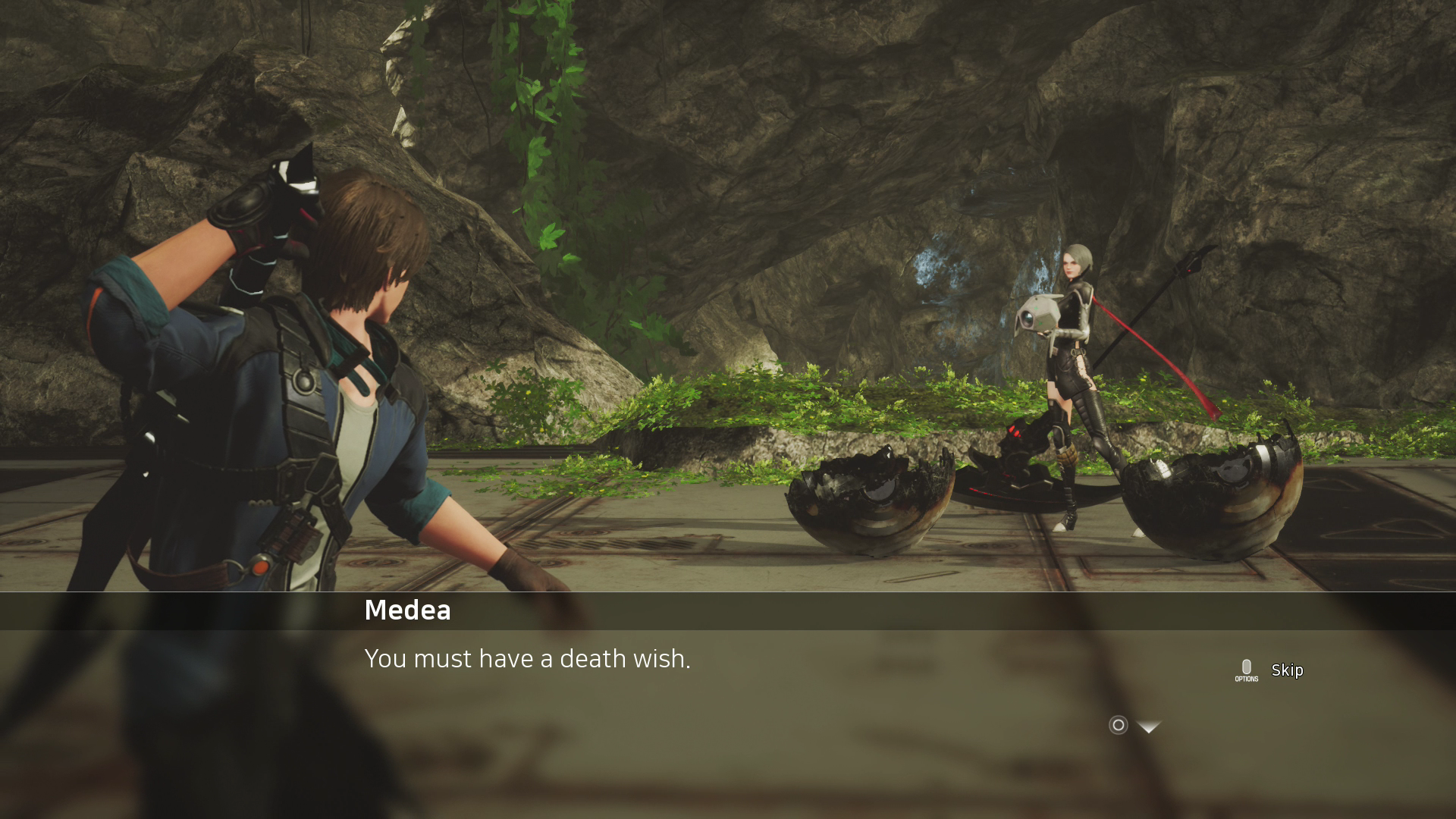 Ultra Age is a 3rd person action-adventure game developed by Next Stage and Visual Dart. It sees you hack and slash through a world filled with dangerous wildlife and rampaging robots. But as you collect several huge swords, and venture with your robot companion, you will be hunted by a mysterious stranger. With a mysterious relic to find and a week to complete your mission, will your skills be enough to keep Age alive?

The Clock is Ticking

In Ultra Age you are Age, a brave, but naive, soldier sent to recover a relic from a crashed spaceship. You are accompanied by a floating sphere named Helvis, Age’s robot companion who acts as a guide. Your colony the “Orbital Arc” tasks you with acquiring a relic believed to be the key to eternal life. Orbital Arc promises to share this gift with you, but they are not the only ones after it. After being ambushed by a mysterious lady who steals the relic for herself, you are able to narrowly escape death.  This sends you on your new quest to find a spaceship, leave this desolate earth, and get your promised immortality. 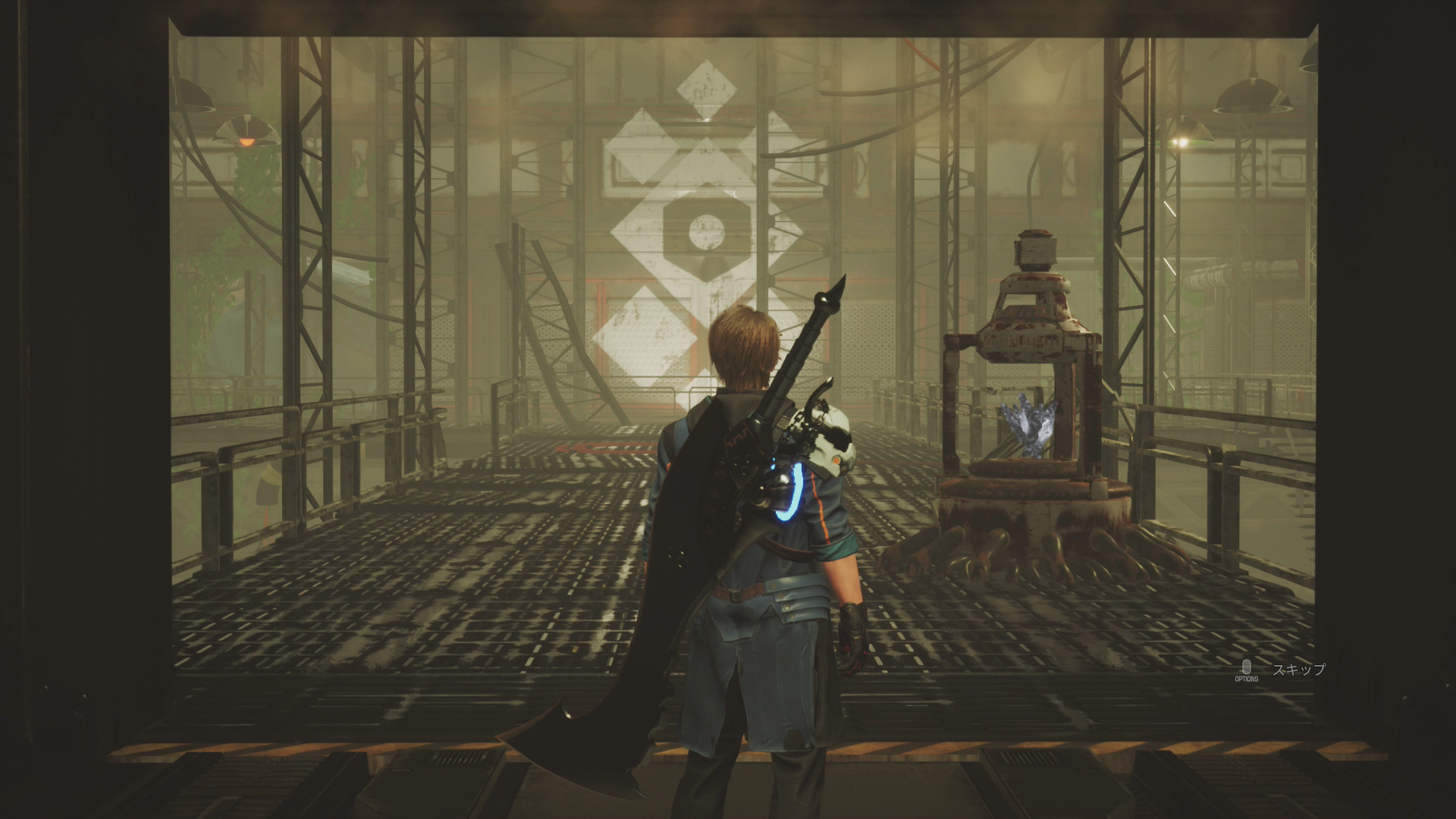 While the story is given urgency by the fact that Age only has one week to live, this same urgency actually hinders the story. Age is in such a hurry along his journey that not much time can be spent on any of the story beats. For example, there is a level where you are taken to an underground shelter. This shelter is meant to house many colonies of people. You’re told that the shelter itself expands on its own in order to accommodate its growing populace.

However, as you explore, there are no skeletons to be found of deceased humans or any machinery in motion. The narrative builds up suspicion to unmask a façade, but it never does. Each level feels like it never got the proper time it deserves to fully flesh out its potential. Thus being quite disappointing. The basis of needing to hurry as Age only has a week to live works, but the very limited exploration causes these levels to suffer.

There is never a dull moment between story segments as the game keeps you engaged through constant fun battles. The combat is basic, weave light and heavy attacks into combos and swap out swords for specific enemy types. You will have a sword that does extra damage to feral beasts, one for machines. You will also have a couple of swords that are neutral in damage output. But early on, Ultra Age introduces a weapon management system by having your swords degrade while you attack with them. Each sword will have 15-20 charges. You can replenish charges by finding crystals in the world. When the charge on your blade is low, you can initiate an attack that will deal a large amount of damage and consume one of the charges. It is an intriguing dynamic that keeps you juggling the various systems.

There are other elements to combat. For example, there is a katana for feral beasts, which can also one-shot enemies if you deal enough damage. Or an electric blade that depletes specific enemy shields and a heavy blade that can break down walls. However, these elements are never implemented in the numerous boss battles.

Boss battles never made use of the weapon management system’s intricacies. I never had to be creative with my weapon choices during boss fights. The fights themselves all have a gimmick. One of the very first bosses you fight is a rhino, which only takes damage by breaking crystals off its body. Similarly, a late encounter sees you rematch against the woman who ambushed you, who can only take damage after you break a shield she puts up. The problem with the way these fights play out is that any weapon can get the job done. There is none of the nuance the rest of the combat requires.

Overall, it was disappointing that the boss fights did not incorporate the game’s weapon management mechanic. It seemed like a major oversight and a missed opportunity. Luckily, the variety and sword charge management kept me engaged during normal combat encounters. 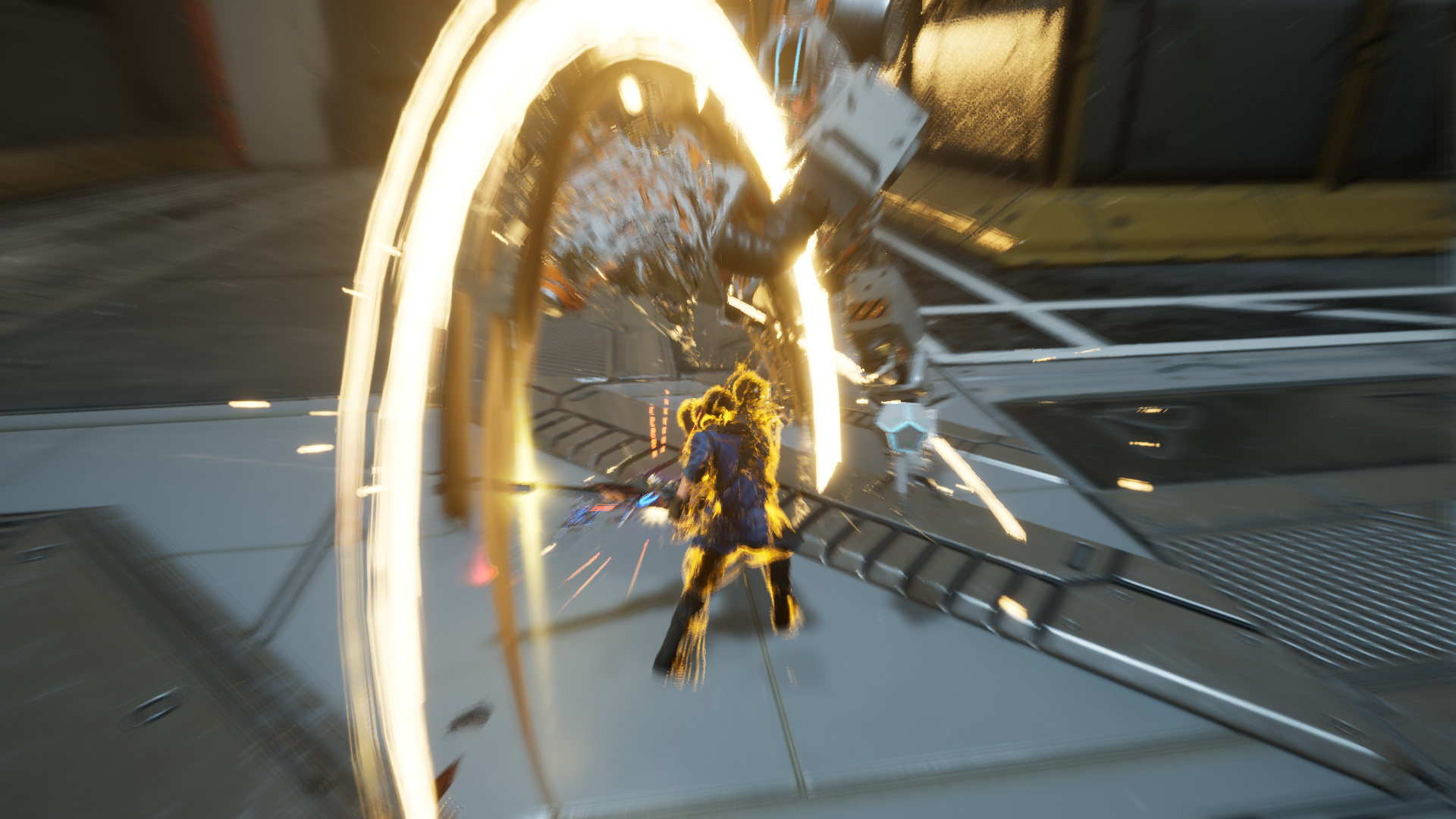 To complete your armory of weapons is a set of tools that Helvis carries. Some are convenient, others are strictly for combat. One notable tool is a mechanic to reverse time to replenish crystals you have harvested in the world. This allows you to double-dip on resources if you run low. Another is a vacuum to quickly collect all currency dropped from enemies. Others are especially useful for combat like the “Critical Rage” Age can activate to increase his critical attack rate and damage for a short time. As well as a self-heal ability that replenishes when you collect crystals specifically for it or from defeating foes. 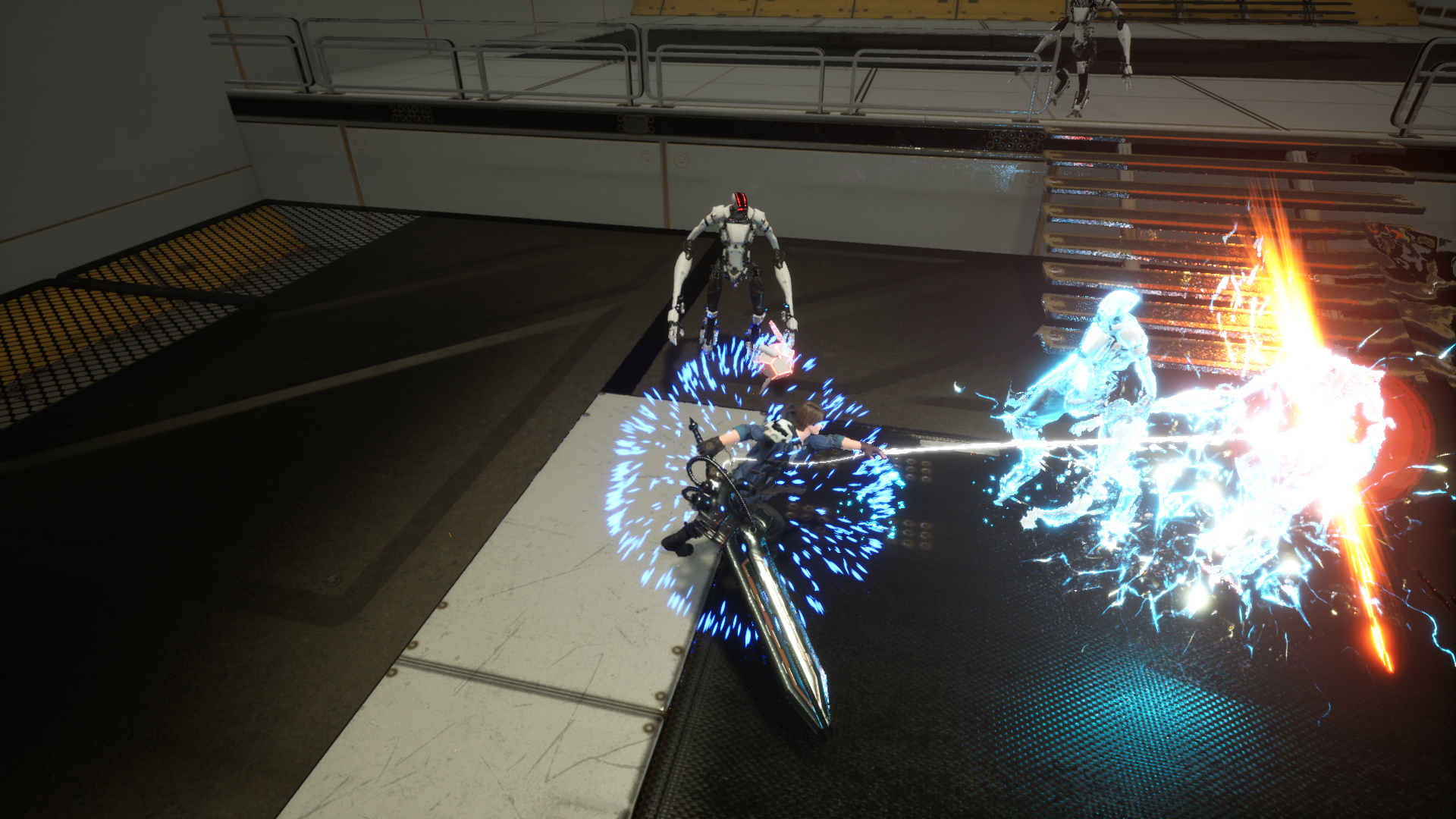 These are all great tools to enhance the experience. But as you progress in Ultra Age you will be able to upgrade your tools and weapons that provide modest improvements. In other words, these will only be small boosts to damage and extra attacks for weapon combos. As the upgrades for Critical Rage and self-heal will always be minor boosts to the healing and extending Critical Rage’s duration. The upgrades feel inconsequential as nothing felt drastically altered. Therefore I never felt rewarded for upgrading. It was disappointing to see various upgrades and high costs of currencies resulting in only modest improvements.

I played Ultra Age on the Nintendo Switch. I noticed that the game’s excellent graphics are quite blurry when in docked mode. The colors of the world are very faded, and the framerate tanks while fighting some of the bigger bosses. The levels are very closed in at times with very few avenues to explore. At one point, Age was unable to walk further than halfway into a shallow pond.

The game feels like it wants to sample a lot of different ideas, but never fully commit to them. At the beginning of the game, Age has an electric leash that is used to traverse large gaps in the map. He does so by grappling the leash to floating blue orbs. It felt good but was later turned into a tool for combat, to teleport to enemies. None of the game’s later levels allowed the use of the leash as it was introduced, which was a shame.  Ultra Age set up the expectation for more open levels, only to be very boxed in for the remainder of the game.

Alongside these problems were very jarring English voice acting that I had to change halfway. Hearing lifeless delivery of lines that seemed serious or humorous kept breaking the immersion. The Japanese voice acting, however, was significantly better. However, during boss battles where dialogue is exchanged in combat, I ended up missing what was being said since the game is too hectic to read subtitles during a boss battle. Changing what could have been a very engaging experience into one I only made through for the combat.

Ultra Age executes a very fun and engaging combat system with bosses that were unique and great to fight. However, introducing so many combat mechanics with its many swords and never using them during boss fights is a major letdown. The story was basic and the dynamic of Age and Helvis never grew over the journey in the many boxed-in levels. Thus, I can not recommend this game since the only enjoyment to be found is in its combat. But the game never felt boring, and it shows the clear ambitions that weren’t executed well by two indie studios. While I won’t remember the journey Age and Helvis went through in the years to come, I will remember the fun I had with its combat.

Ultra Age is available now on Nintendo Switch and PlayStation 4 for $29.99.