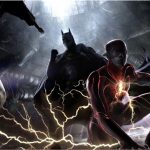 You are reading
DC FanDome 2021: The Flash Trailer Arrives

During today’s DC FanDome event fans get to see plenty of great things coming out in the DC Universe. That includes upcoming video games and movies. Black Adam was shown off at the start of the event and we even got a tease of The Flash. More importantly, we got to see Micheal Keaton return as the Dark Knight, well we see the back of his head and hear him talk in the new trailer.

For the most part, the road to get to this point for The Flash has been difficult. With many delays, it seemed like this movie would never happen. Take a look at the trailer that not only shows off two different Flash characters. We get to see Sasha Calle as Supergirl. This movie is going to unlock the greater DC multiverse. It’s rumored that we will have two actors playing Batman in this film.

Take a look at the first trailer for the upcoming movie The Flash.

It looks like this movie will definitely be one of the bigger movies coming out in 2022. Look for this film to come to theaters on November 4th, 2022. How do you feel about the way DC is moving forward with their movies? Once they realized they could not copy what Marvel has done it seemed like everything started working for the DC Universe.

Don’t forget there is also a hugely popular The Flash show that actually had a cameo by Erza Miller in it.