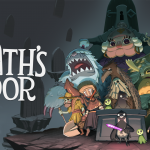 You are reading
Death’s Door Coming To PlayStation and Switch

As part of today’s State of Play, PlayStation announced Death’s Door is coming to both PS4 and PS5 on November 23. As part of the news, publisher Devolver Digital followed up by announcing a Nintendo Switch release as well. Both versions of the game are coming on the same day.

One of this year’s indie darlings, the top-down adventure game touches on horror elements while paying homage to classic Nintendo titles like Links Awaking. We absolutely loved Death’s Door, Switch owners are going to be very please when the game releases next month.

In Death’s Door, you play as a crow, who is filling in for Death as your new nine to five. Of course, things go terribly wrong and you end up getting stuck between planes of existence. From there you will hack and slash, shoot a bow, and cast spells. PlayStation and Switch owners can look forward to playing the game on November 23rd.