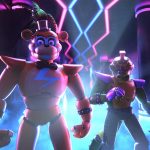 You are reading
State of Play: Five Nights at Freddy’s: Security Breach

Do you want to venture back into that creepy pizza parlor after dark? Are you worried about being hunted down by some demented animatronic creatures? PlayStation has the game that you need. Five Nights at Freddy: Security Breach is a larger new game that brings players back into the scariest place to be after dark.

Security Breach is a first-person, survival horror game set in Freddy Fazbear’s Mega Pizzaplex. You play as Gregory, a little boy who’s trapped inside overnight. Once the surprisingly robust Pizzaplex lockdown procedures go into effect, you must survive while you search for a way out. Let’s take a look at what you’ll be able to expect from Security Breach’s moment-to-moment gameplay.-PlayStation Blog

As players progress through the night the S.T.A.F.F bots will adapt and learn. That means those tools that will be available need to be used sparingly if you want to survive. Let us know how you feel about this game in the comment section below. Will you be playing Five Nights at Freddy’s: Security Breach when it comes out this December? Don’t forget to see some of the other news that came out from today’s State of Play including First Class Trouble and Star Ocean: The Divine Force.