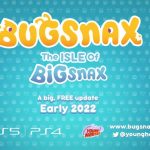 You are reading
State of Play: Bugsnax Gets DLC

During Sony’s State of Play event today, DLC for Bugsnax was shown off. Titled Bugsnax: Isle of Bigsnax, the DLC will bring giant sized bugs to the game for the first time.

Bugsnax was one of the surprise hits of the end of last year. The game boasted a charming aesthetic that was paired with a surprisingly dark ending. The game’s mechanics of catching bugs will return, though how the new Bigsnax will factor in has yet to be seen. Look for the DLC to launch for free