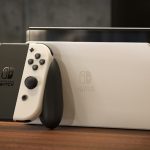 You are reading
Is The Nintendo OLED Switch Worth It?

The Nintendo OLED Switch is here. We have had our hands on Nintendo’s latest hardware revision and we have put the console through its paces. You can pick it up starting on October 8th in colors White or Neon for $349.99 USD.

Nintendo has doubled the internal storage space to 64GB and expanded the screen size to seven inches. Outside of that, for the most part, the OLED Switch is a lot of the same. Nothing has been done to increase the console’s visual performance or fidelity. Most of the changes to the new model are minor quality of life tweaks. The culmination of changes may not warrant an upgrade for original Switch owners. However, the new unit does makes a compelling case to spend the extra $50 compared to the base Switch model ($299.99 USD). 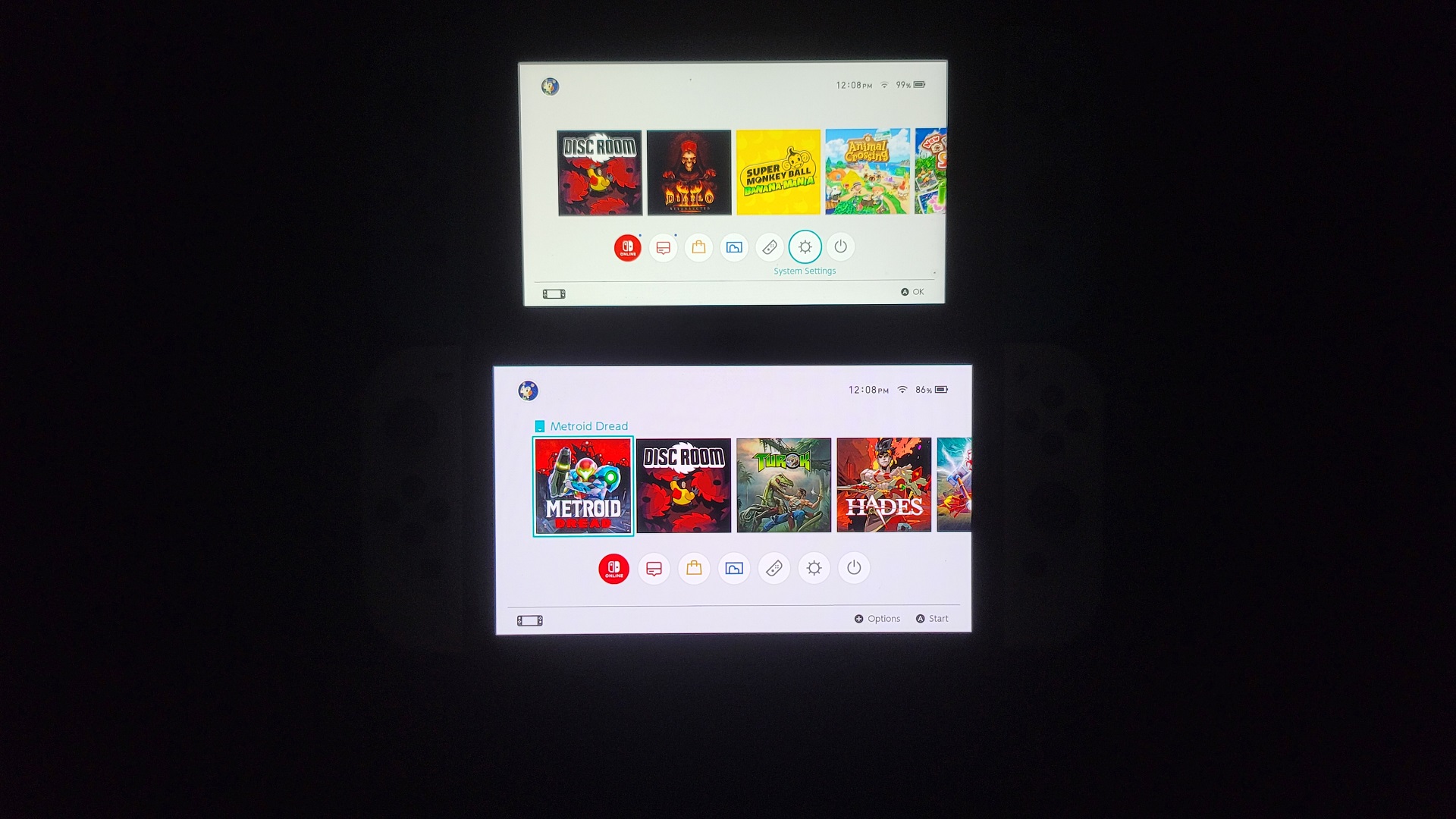 The headline feature of the new OLED Switch is, of course, the new display panel. The OLED model boasts a 7-inch OLED screen compared to the original’s 6.2-inch LCD display. While it does not sound like a massive change, it gives the hardware a more sleek look. Most of the bezel is gone, and the display covers almost the entire console.

On a small device like the Switch, you take what you can get with screen real estate. Nintendo has been able to make a major change here, without changing the size of the console. So all of your accessories will still work.

Of course, the quality of the screen is significantly better. While the new screen will not increase resolution or refresh rate, side by side there is a clear difference. The screen is brighter, the blacks are darker and the OLED panel gives the console an enhanced crisp look.

One thing that I had hoped for out of this revision was a display that performed better in sunlight. While there is a slight uptick in visibility under sunlight, it is not a substantial difference. I experienced less glare with the OLED Switch when outdoors yet, it was not a meaningful difference. I still had issues seeing dark areas while under sunlight. A game with dark tones like Metroid Dead is still unplayable if you are under sunlight. 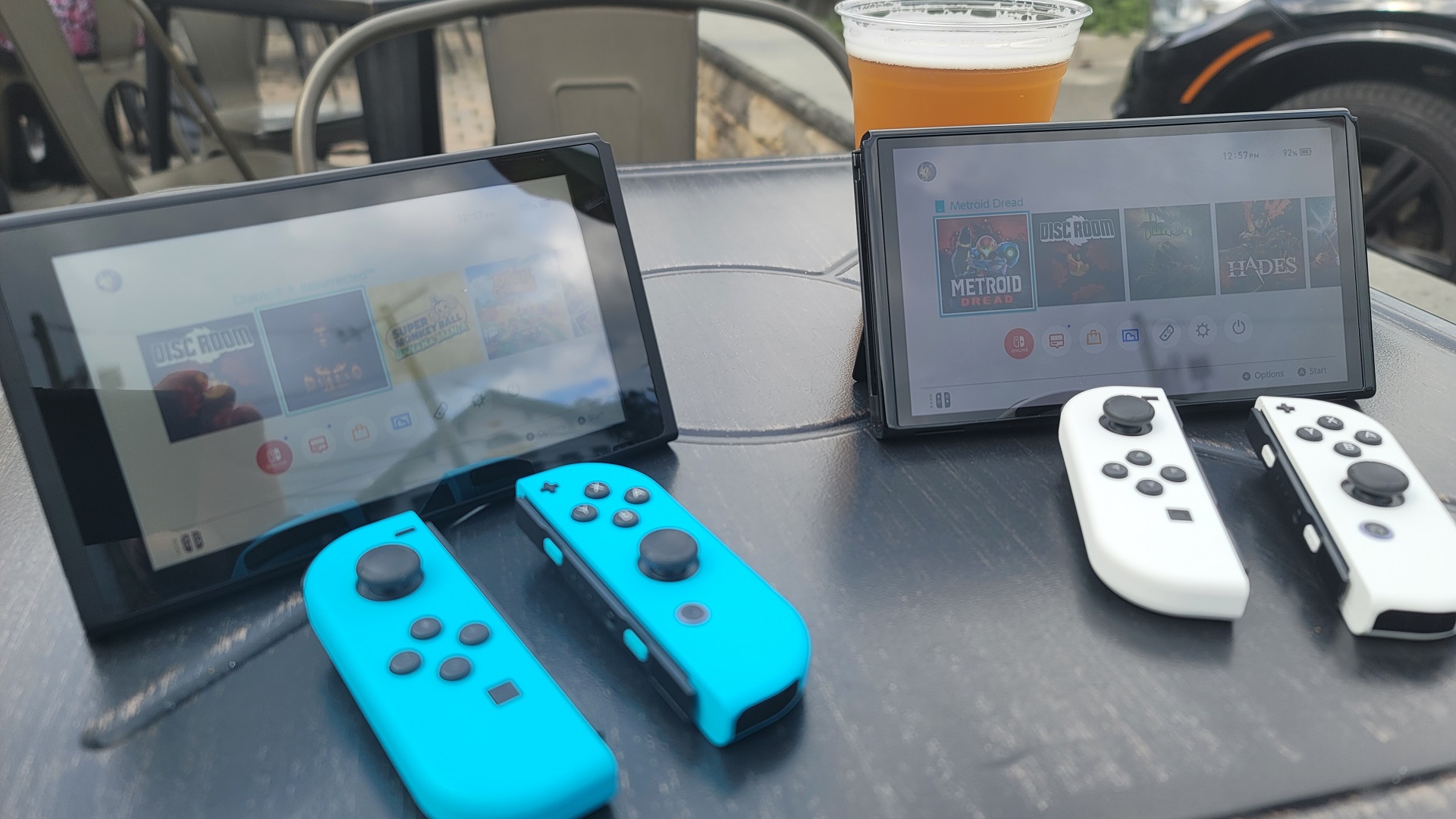 The OLED Switch is a slight improvement when it comes to glare.

Along with the new screen comes some minor quality-of-life improvements for the OLED Switch. The console’s shell has been partially changed. When you hold on to the new console, you will notice it has a more matte feel to it. I prefer this redesign because it feels more rugged.

After that comes the new kickstand. No longer do you have to peel off the old fragile kickstand that frequently fell off. The kickstand now folds out from the entire width of the console. It takes far less effort to detract the kickstand. As well as insert an SD card, which can still be found under the kickstand.

Speaking of tedious parts to peel off of the Switch, my biggest knock on the OLED Switch is the new cover for the cartridge slot. On the original Switch, there was a small opening on the cartridge cover. You would insert part of your fingernail to remove the cover to replace the game inside the console. For whatever reason, Nintendo has opted to leave this small crevice out, making it tremendously difficult to swap games. If you are a nail-biter that plays mostly physical games, this is going to be a headache for you. I find it to be completely obnoxious. 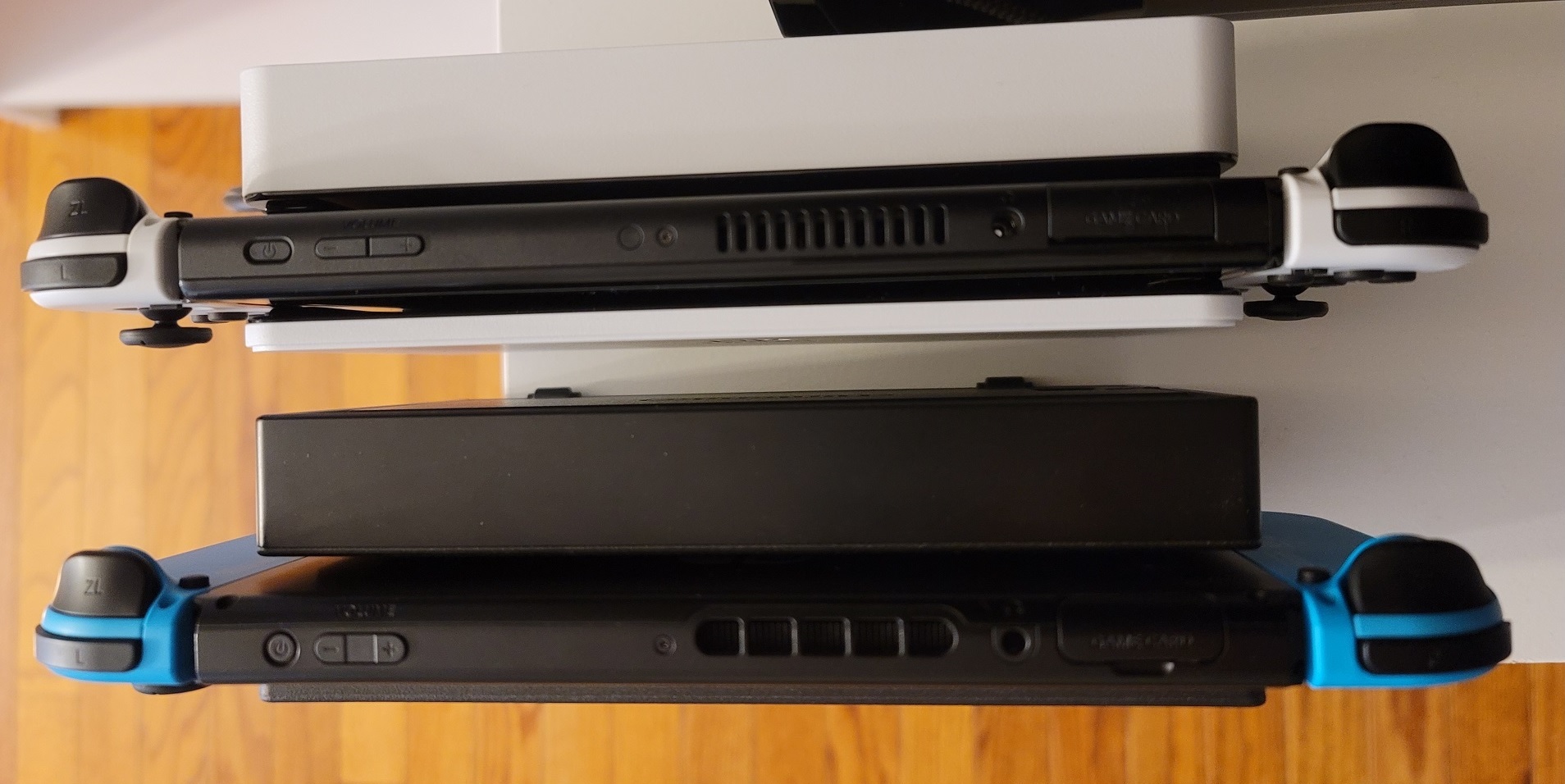 Nintendo removed the crevice on the cartridge cover. I now know what it is like to ask for help to reach the top shelf and open jars.

If you buy the white OLED Switch, it comes with a gorgeous white docking station. While the Neon model comes with a standard black dock. Just like the console itself, there have been minor updates to the hardware. The back door exposing the ports no longer swings open. Instead, it pops on and off like a battery cover for a TV remote.

Once you get the door off, you will find some good news and some bad news. The good is there is now a LAN port for hardwired network connectivity. While it is unlikely this will improve the performance of the Smash Bros. servers, it is a nice addition. You can still use the two front-facing USB 3.0 ports to connect your pro controller and other accessories.

When it comes to aesthetics, Nintendo has added a glossy finish to the inside of the docking station. This appears to be an attempt to mitigate reports of Switch consoles becoming damaged after being frequently removed from the dock. In addition to having the console sit about one-quarter of an inch higher out of the dock for easier grabbing. Outside of that, the dock has been updated in design with round edges, giving the console a more modern look. Especially in the white, sitting next to your PS5.

Original Switch model HAC-001, from the console’s launch, has an estimated battery life of two to six hours depending on the game you are playing. For the sake of this test, we played both Mario Odyssey and Animal Crossing. Our original launch Switch depleted its battery at around 34% per hour.

The “Red Box” Switch model  HAC-001(-01) released in August 2019 features a more energy-efficient version of the Tegra X1 chipset. Unlike the original HAC-001 model, which comes in a white box with red Nintendo logos.  This version of the console comes packaged in an all-red box. Our tests had the battery depleting at approximately 20% per hour.

With that, our original launch Switch lasted three hours playing Mario Odyssey and Animal Crossing. This is straight through, without stopping, at medium volume, with nothing connected except for the Joy-Cons. Our “Red Box” Switch lasted about five hours under the same tests.

As for the OLED Switch, I experienced around a 15% per hour decrease in battery life. Which is only 5% better than the “Red Box” 2019 Switch hardware revision. Although, if you have a Switch from the first two years of the console’s release, you will see a dramatic increase in performance from the battery life. A nice improvement granted that the display is providing more. 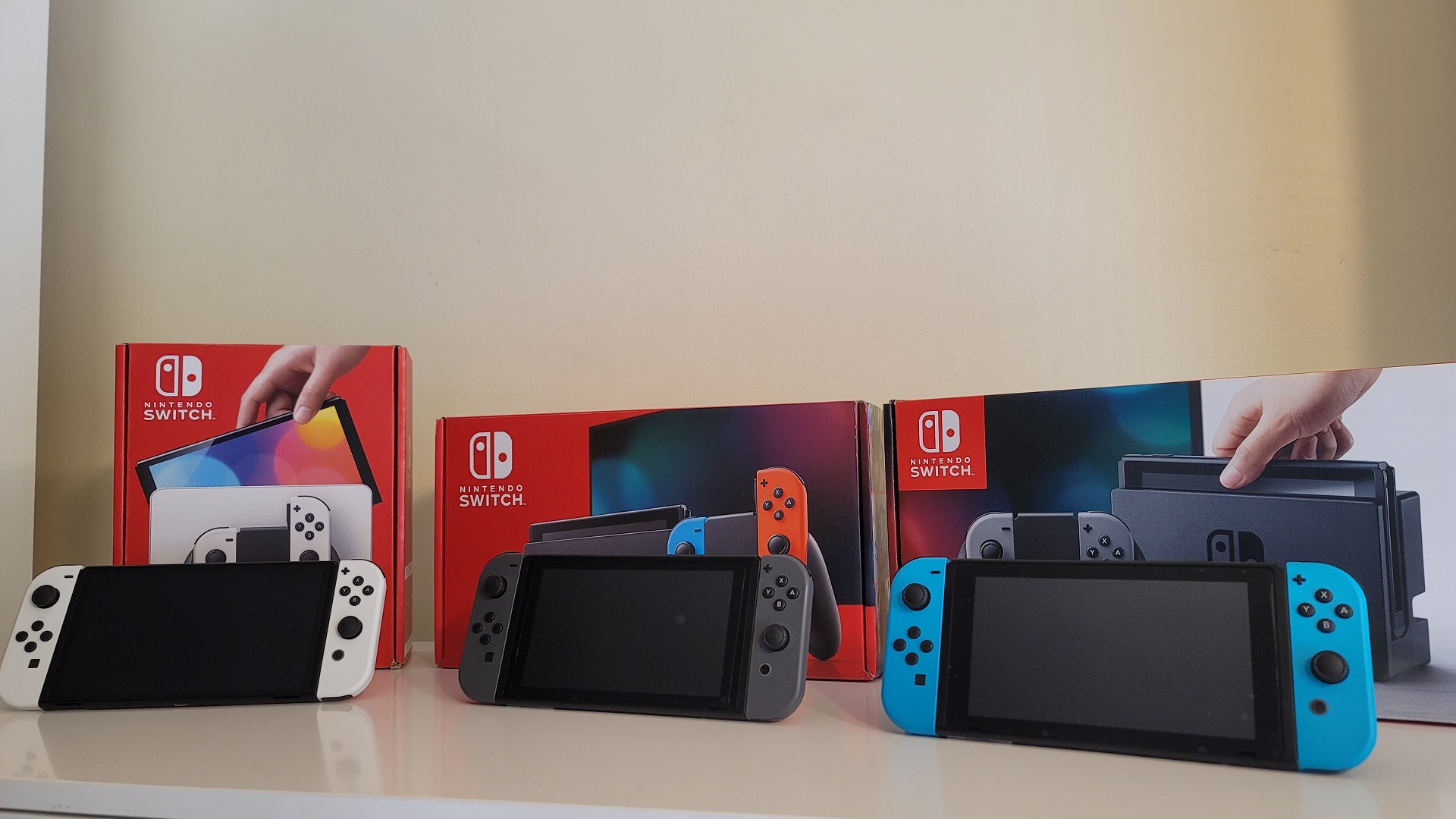 Is It Worth It?

A 5% increase in battery performance over the “Red Box” Switch console is not worth the near $150 it may cost to upgrade. Plus the new screen is not going to give you anything your current Switch can not. Although if you are looking to buy a Switch console, the $50 upcharge for the OLED model is absolutely worth it. The culmination of small improvements add up to make a big difference, just not $150. The new display, battery life, and increased storage are worth the extra $50.

If you have a launch 2017 through Summer 2019 original Switch, you are looking at doubling the battery life here with the OLED Switch. If you find yourself traveling and need an extra boost, there will be value here in upgrading to the OLED model. If not, it may be worth the wait to see if Nintendo packs in a game next year at the same price.