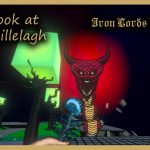 Lord Snalydo gives us a glimpse of Shillelagh from developers Andrew Simon Thomas LLC. This game brings you unlimited amounts of levels and difficulties as you try to fight off hordes of demons!

The game was released on October 20th on Steam and players can receive a 20% discount until the 17th. You can check out our full impressions of Shillelagh in the video below. Be sure to check out other first looks by Lord Snalydo here. We here at Lords of Gaming also got a chance to sit down and chat with the developer at the Play NYC 2021 conference.

Shillelagh is a fast and frantic arena shooter. Players are armed with the aura of nature to defend against destructive, undead monsters. The game includes brutal procedural levels that get smaller the more enemies you face. It also features a high score leaderboard, hand-drawn artwork and animations, and a crunchy metal soundtrack by John Fio.

Be sure to check out the full developer interview from Play NYC below. If you like what you see be sure to head over to Steam and wishlist the game. And as always, be sure to check back to Lords of Gaming for all your gaming and entertainment coverage, reviews, and analysis.