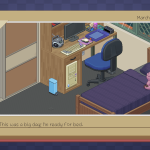 You are reading
Unpacking Review – A Short and Sweet Life Story 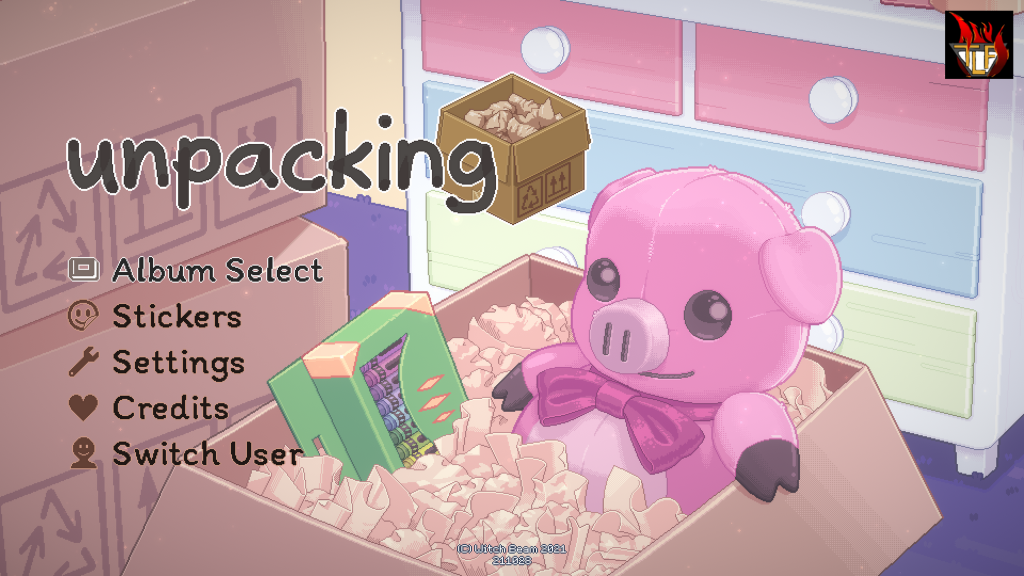 Unpacking is a cozy point-and-click puzzle game developed by Witch Beam. In Unpacking, you must sort through a multitude of packing boxes and decorate multiple rooms. As you undergo this simple and relaxing task, you will witness the journey of someone’s life. This is accompanied by a retro and somber soundtrack. All of this flows together as you uncover who this person is in each level as conveyed by items in the boxes.

Unpacking on the surface does not really show a standard story or narrative. The game lacks cutscenes, dialogue, or any of the standard background storytelling methods. There are no notes or books with paragraphs detailing the setting and characters to disrupt the gameplay. It instead focuses on telling its story and introducing its main character via the items you unpack from each box. What are her favorite colors? What religious beliefs does she have? Is she going through rough patches in life? All these questions were always indirectly answered well. Even if it is a slow burn, I was always eager to see the next house and uncover what was there to be learned. 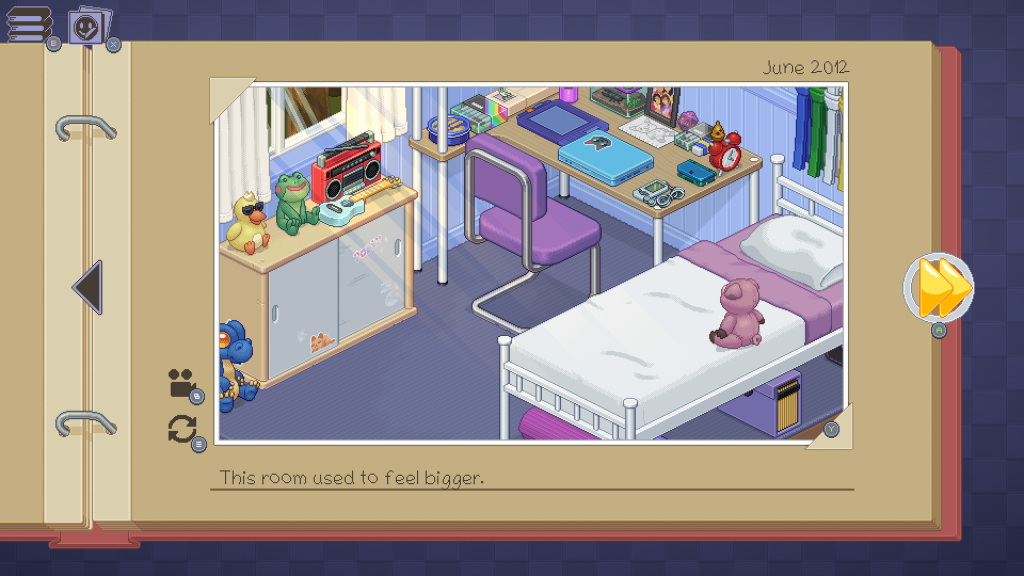 Even though the game never told me her name, I was there to watch her grow up and find the life she loved by picking up her belongings one by one. Seeing her childhood room, her move-in with friends, a potential lover, or her moving back in with her parents, and so on. Every stop conveyed a unique narrative. It’s time skips never feel cheap or overused. The final room you unpack could be a picture in a scrapbook. It always kept me engaged to see what was next. Each new house never felt cliché in the slightest.

The gameplay in Unpacking is a very relaxing break from modern video games. You move items one by one into various locations of rooms. Each room will have multiple boxes with sometimes matching and sometimes not matching items for them. It’s your job to take each item and place them in cabinets, on desks, underneath pillows, or on clothes racks. It is here will you pull out unique items for the main character like a dreidel for her childhood room or a minora for her dinner table as an adult. As well as recurring items, like a stuffed pig which you see change in color and appearance as time progresses between each house.

The game is also not too easy, as it hosts unique ways to challenge players with the sorting process. All items will always have a predetermined area and room they need to go to. It will never be too picky, so putting her Gamecube on the table as opposed to in the TV console won’t make the game tell you to put it somewhere else. While things like the main character’s computer will always need to be at her desk. Similarly while her yoga mat can be placed under the bed, the game is flexible enough that it can also be placed in the closet. 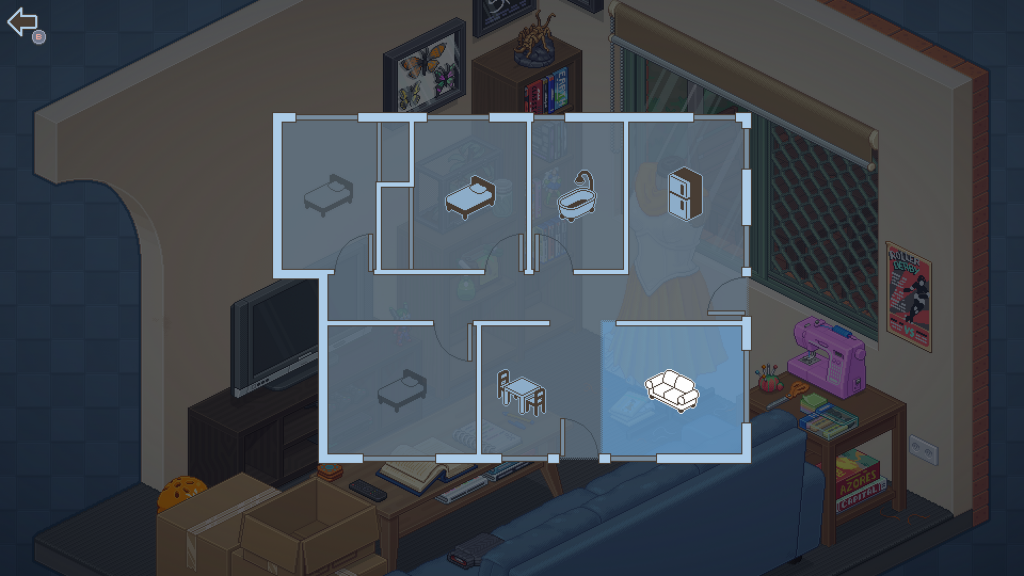 If any item is highlighted as incorrectly placed, you will have to figure out where it goes to progress. While this does sound tedious, it kept me engaged while understanding the organizational system of the main character. But also features replayability to find stickers you can unlock by putting items in certain places. These stickers can be used in the game’s photo mode. Some can feel natural like putting two stuffed animals near each other. While others can be specifically silly, like putting a toaster in the sink or tub. It’s very niche but very fun and satisfying to play.

Presentation and Final Thoughts on Unpacking

Unpacking features a very colorful pixel art style. Every item is incredibly detailed, right down to the covers of games, movies, and books. Each of the various unique apartments and houses that are never the same to decorate. Even the bathrooms all have unique layouts and little details of how the environment interacts with itself. Like opening a closet door and not being able to close it unless I close the open drawer stopping it. With a deep sound design like taking a cup and placing it in multiple locations to hear the unique sounds. It never stopped surprising me throughout. 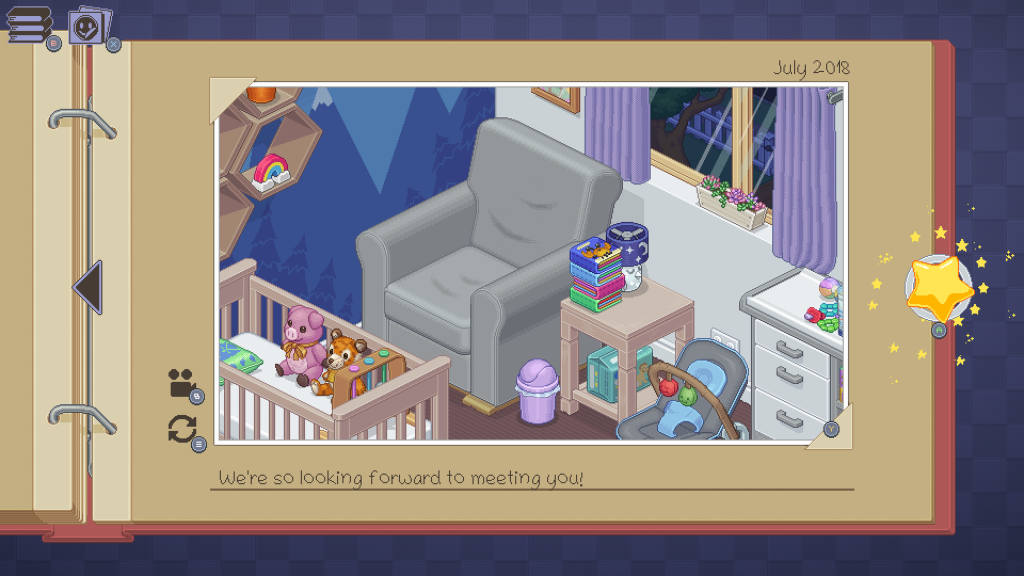 As such, Unpacking is a surprise all on its own. It can be a short 3-5 hour adventure but has so much to appreciate in it. Opening up boxes and sorting the items into a house never sounded fun or engaging to me at first. But it prevailed by having such a unique way of telling its story, finding a simple way to be compelling. While the gameplay, while simple as well, always remained fun and engaging. It’s a niche experience, that is easily recommendable, especially at its price.

Unpacking is available now on Xbox Series X|S, Xbox One, Nintendo Switch, and Steam for $19.99 and available on Xbox Game Pass on Console and PC.

8
A Short and Sweet Game