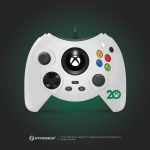 You are reading
Xbox 20th Anniversary: The Duke Was the Start of Something Beautiful

It has been twenty years since the launch of the original Xbox console. Back then, the first controller that came with the original console was infamously called the Duke. And it was called that for good reasons too. It was a bulky controller that some people hated, while others revered. No doubt after 20 years players have gotten plenty of amazing controllers within the Xbox ecosystem. During that time countless hours have been spent using different controllers. Some of those controllers were just the plain white or black ones. Now we have controllers that are beautiful works of art.

One Duke to Rule Them All

With everyone’s console, the controller is an important piece of the experience. That initial controller reveal can usually make or break a console. For instance, take the Steam controller. How many people still use it? Probably not that many. Technically, you don’t need one when you can just use an Xbox One controller. The ability to look great and have a good feel in the hands of the player didn’t start out that way when the original Xbox was released. The Duke is a controller that many didn’t enjoy. That’s because the size and placement of the buttons threw people off. Most players don’t have large hands like some of us. So that’s one take why the Duke threw people off. Despite this, players can still buy this controller through Hyperkin to this day.

Put That Controller in a Museum

At the moment players are now using works of art to play games. With game releases like Sea of Thieves or Halo Infinite, special controllers have been released. Each of these controllers are usually hard to find within a few days of their release. Making them as valuable as some jewelry. With artists like POPeART players can get beautiful controllers likes those in the gallery below. While this isn’t the only artist working on custom controllers or skins. He is one of the best that you can find online.

After twenty years and a rough start it feels like the Xbox has continued to create the perfect controller. Even with the little heaver Elite 2, Xbox players are on their way to always have the best controller. Have you stopped to think how many controllers you have gone through for each console? Did you use the Duke when it was launched with the original Xbox? Let us know in the comment section below. 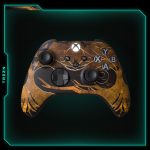 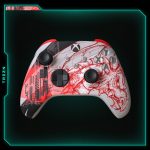 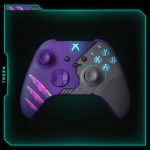