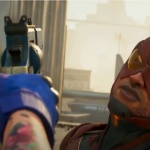 Today is the Game Awards which means a massive celebration of the gaming industry is on its way. Celebrating the creativity and hard work of all the developers who developed and published games in 2021. As is tradition with the Game Awards we have a wealth of new trailers and announcements to be excited for. The upcoming Suicide Squad game from Rocksteady is a title many fans have been wishing to see more of. Now those wishes have been answered.

In a new pulse-pounding trailer we get our first look at the gameplay of Suicide Squad Kill The Justice League from developers Rocksteady. Many will remember Rocksteady as the studio behind the incredible Arkham Trilogy. It has been over 6 years since we last saw a game from Rocksteady, and the hype and anticipation for their next project continue to grow. After bringing Batman to life in such a big way, the opportunity presented with the variety of characters within Suicide Squad is incredible. Include this with James Gunn’s adaption of the team to the big screen and you have a recipe for a highly anticipated title. In this brand-new trailer, we get a look at the game in action, as well as some of the ridiculousness that we will expect to see. While we only have a release window of 2022 currently, we will undoubtedly learn more about the game as we head into the early months of 2022.

The official Gameplay Trailer of Suicide Squad: Kill the Justice League. Coming in 2022 to PS5, Xbox Series X|S, and PC.

Are you excited about this new project from Rocksteady? Let us know in the comments and don’t forget to check back for the latest gaming news and information.