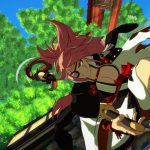 You are reading
Baiken Gets a New Trailer, Release Date for Guilty Gear Strive

The red-haired samurai Baiken is making a return to the Guilty Gear franchise. Along with the fourth character in the game’s first season of DLC comes the brand new stage “Lap of the Kami.” Both Baiken and Lap of the Kami are set to be released on January 28 for season pass buyers. Both DLCs will be up for individual sale on January 31.

Along with the gameplay reveal trailer, Arc System Works has dropped a gameplay breakdown for Baiken. With Baiken’s move set and combat style, it looks like she will be a force to be reckoned with on the battlefield.

Are you excited about the new character? Let us know in the comments down below!