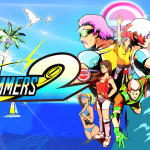 You are reading
Windjammers 2 Our Disc Flying Review

In the spring of 1994, Windjammers was one of the most popular arcade games in the world. It found new life in 2010 when Nintendo released a version of it on the Wii Virtual Console. Followed by a Dotemu published re-release with online support for PlayStation 4, PlayStation Vita, and Nintendo Switch some five years later. This week, Dotemu is back with an outright sequel, Windjammers 2. How does a sequel hold up after all this time? Well, continue reading to find out.

Windjammers 2 is practically a game you can stumble and fall on, it is going to be everywhere. Stadia, Xbox, Xbox Game Pass, Steam, PlayStation, and Nintendo Switch players will all be jamming this week. The top-down camera view and arcade mechanics make it a fantastic game for on-the-go fun. Whether stuck at the DMV for three hours or waiting for a friend at a local coffee shop, Windjammers 2 is going to be readily available just about anywhere.

Unlike the port of the 1994 version, Windjammers 2 has some seriously updated visuals. The art style has been completely remade with a modern look that has extreme 1980’s beach vibes. Dotemu has given Windjammers a brand new look and feel that honors the original game while capturing the setting and time period of disc-slinging showdowns. Everything from the color palette of the levels, to the clothing on the characters, the art immaculately captures what the team set out to do.

In any mode of Windjammers 2, you will be playing as one of the 10 characters. Each with its own unique style, country of origin, and balance. The balance of each character is made up of a bar of speed and power. Cumulatively, each of the small differences gives the characters a unique feel.

All 10 characters are engaging in their own way. H. Mita from Japan has a red and white look that takes no prisoners. H-Max from Canada has a style that comes straight out of 1980’s Professional Wrestling. While there is no story, each character having a country of origin does give the game an Olympic element. Unfortunately, the flags behind each character are the only crumbs of a narrative Windjammers has to offer. 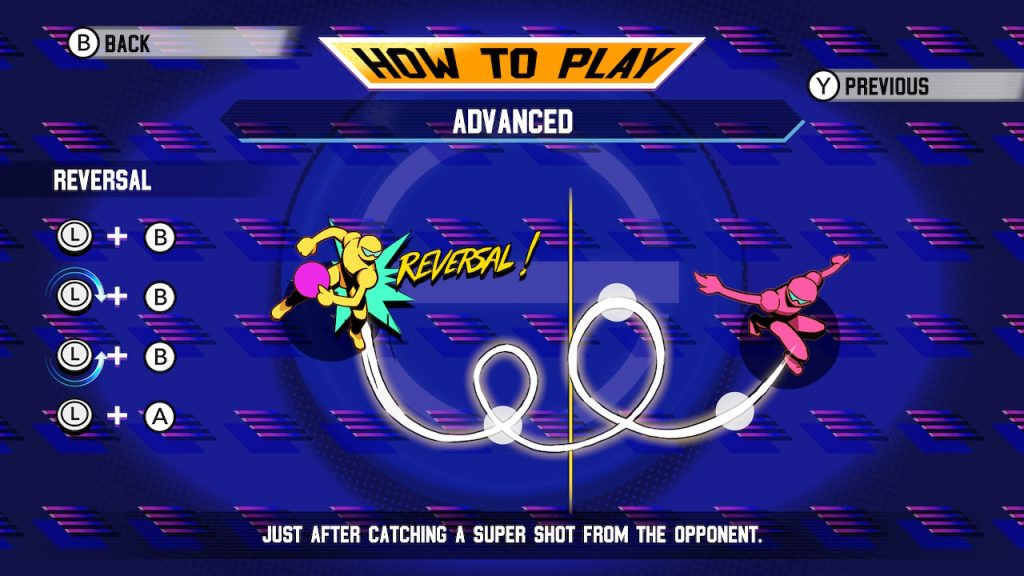 The basic gameplay is simple, it has mechanics that are deeply rooted in pong and table tennis. Throw the bouncing disc on the other side to score points, while preventing your opponent from scoring on you. In Windjammers, the first to 15 wins the set, each round is the best of three sets, so claim two sets and you get to move on to the next round. Your average game is going to last around three minutes. The rounds feel very similar to classic 2D fighting games and there is a 90-second timer per set. Yet, the most interesting part of the game comes with the move sets.

The meat of Windjammers 2 is without a doubt the complicated move set. There are 15 different attacks you can perform with the disc. Mastering the game is very similar to a classic arcade fighting game like Street Fighter. You can get by with “button mashing.” Then as you learn the core moves you become comfortable enough to take on new players. Getting comfortable with the 15 attacks will make you an exceptional player, good enough to even check the leaderboards.

A basic attack will have you throwing the disc in corners far from the player. An advanced attack will have you throw a disc that can change directions mid-strike. Then skilled players will be able to mix up all of the different attacks with a lob, a toss, and a shot. There are so many moves to remember I just began my playthrough button mashing. Very quickly thereafter I moved on to attacks that made multiple twists and turns. Somewhere around the five to ten-hour mark, I feel comfortable with the complete move set. Plus the controls are super tight and everything controls very well, even when using the Switch Joy-Cons. There feels like the perfect amount of leniency when trying to spin the disc in a certain direction. And direction is key in the move sets.

For the most part, you will be using the left thumbstick to guide the direction of your throw while you use the face buttons to pick between a lob, toss and throw. Finally, when your power gauge is full you can use the right trigger along with two face buttons to perform a special attack. Each character has their own special attack along with a unique animation. One character has a special attack that moves around the screen with sparkling fireworks, it is a nightmare to defend but if you learn the patterns you can fight back against it. 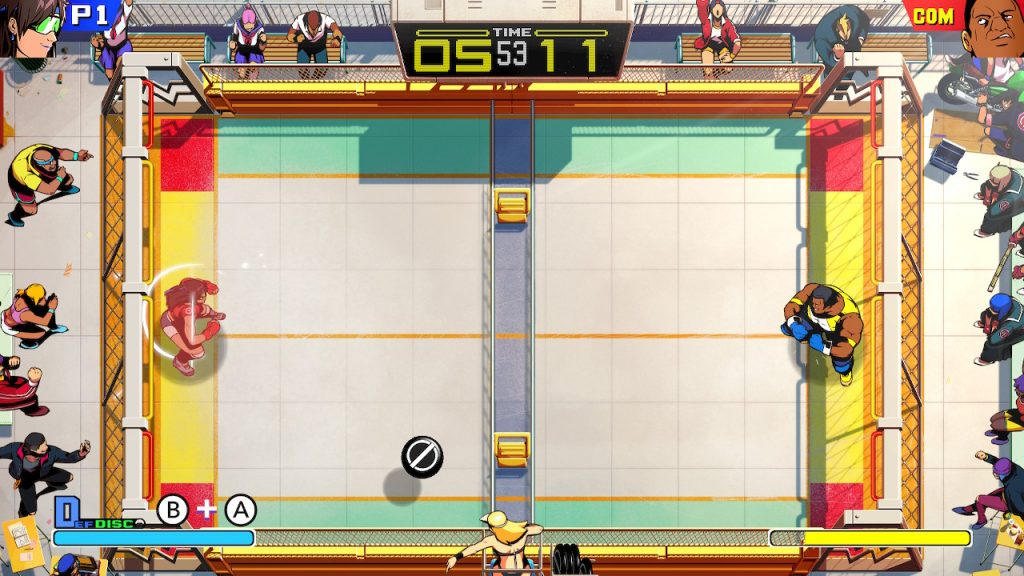 From the welcome screen, you will be able to select from three different modes, Online, Arcade, and Versus. In Online mode, you will be able to play a ranked match, quick match, or play with friends. Along with the online leaderboards guiding you through your quest to be the very best jammer 2022 has to offer. With Versus mode, you can quickly play against the computer or a local player.

While in the Arcade mode you will be taken through a more “insert quarter” traditional arcade game. There are three difficulty levels, 10 playable characters, and 10 arenas. You will have to survive five rounds and two mini-games in order to complete the game. Score enough points while playing and that will earn you some continues. These are going to be scarce and essential to surviving the five rounds. Windjammers 2 is challenging until you become at least proficient with the 15 moves. Mastering the moves is really what Windjammers 2 is as a game. It does not take more than 25 minutes to complete an arcade run. Although it could take up to 10 hours of playtime to become a master at the move set.

My biggest problem with Windjammers 2 is the lack of a traditional “carrot on a stick.” There is no story taking you through any sort of campaign. In addition to the fact that there is almost nothing to unlock besides the two mini-games. There is nothing moving you to complete the game, other than playing it as if it were a traditional arcade game. Of course not having a story in an arcade game is totally fine. Yet look at something like Marvel vs. Capcom 2, that game has no story as well but it has 23 characters to unlock, that was almost 30 years ago.

Windjammers 2 As A Whole 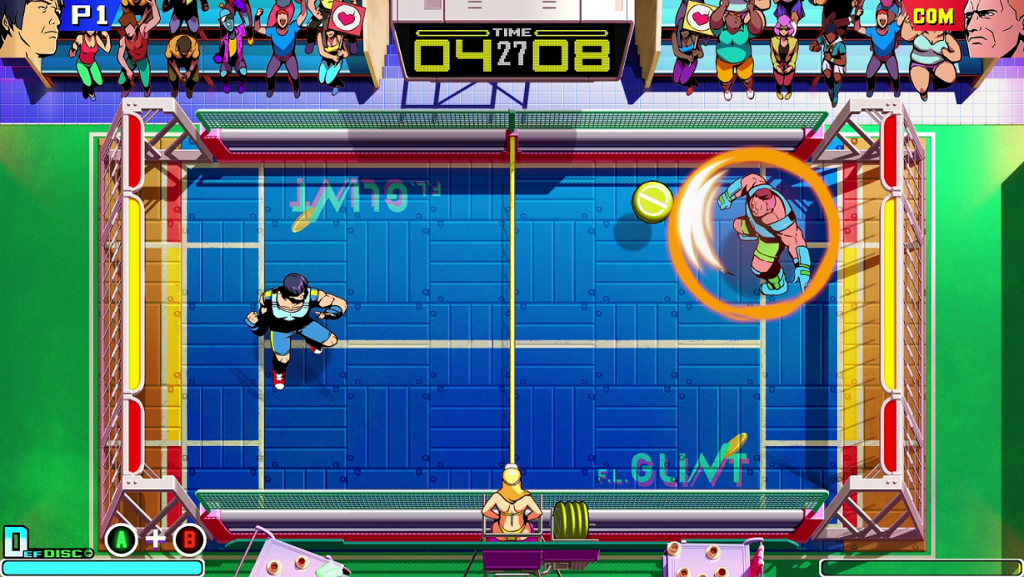 Windjammers 2 has a lack of depth in content, it feels like it is missing something. Something like a character creator, a level builder, a simple story, or more characters to unlock would go a long way into making it feel like a deeper game. I know Windjammers is from a different time but now it is 2022 and fantastic games are coming out every week. While at MSRP Dotemu is not asking for a lot, today the player’s time is the most valuable ask. The game needs to be engaging for more than a weekend.

From a technical standpoint Windjammers, 2 is problem-free. I would steer away from playing the Switch version online, although that is just due to my lack of faith in the Nintendo Network. there were no technical problems or glitches with the game. It sounds great, feels great, controls great, every mechanic in the game is rock solid.

At this point, Dotemu has been keeping old games alive for nearly 15 years and I would trust them with my elderly mom. If you have a group of friends who are stale on couch co-op fighting games, and party games, Windjammers 2 is going to be a nice addition to mix things up. Besides, if you subscribe to Xbox Game Pass, you already have the game when it launches this week. If you can get past the lack of depth in content, there is a fun game to be had here. Windjammers 2 is a fun collection of moments that magnificently fill the gap left by a void of classic fighting games.

7
Quick and dirty fun on just about every platform.