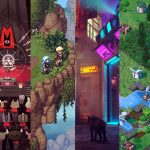 You are reading
2022 Preview: Indie Games To Watch For

Our 2022 indie games to watch list is here. After a year of delays, spreadsheets, and digital events we have narrowed down the best of the best. Here are our favorite already announced indie games for the upcoming year. There should be something for everyone here, cozy times, death cults, and even westerns.

Bear and Breakfast is a narrative simulation adventure game (in no order). You will play as Hank, the new manager of the mega-rural Bed and Breakfast. We got to play the game last year as part of the Steam Summer Fest, and it was a lighthearted serene experience. The top-down view is going to be a perfect game for vacation via the Switch or Steam Deck. Bear and Breakfast feels like a refreshing cozy time to be had in 2022, something we can all use. Hopefully, it still releases in 2022, as Bear and Breakfast made our 2021 indie game list as well.

Cult of the Lamb

Action roguelike dungeon crawler Cult of the Lamb will be coming to Steam in 2022. We are still holding out hope for consoles. With that Cult of the Lamb has the chops to be one of the best indie games released this year. The premise is fun and unique. Plus publisher Devolver does not miss. We know very little about CotL; however, the lone trailer shows off heavy action, while the press release touches on town building. “Collect and use resources to build new structures, perform dark rituals to appease the gods, and give sermons to reinforce the faith of your flock.”

Have A Nice Death

Have A Nice Death will launch in early access this March. As of right now, it is only confirmed for PC, although we are sure it will eventually find its way to consoles. In Have A Nice Death you will play Death, the CEO of Death Incorporated. Of course, something goes wrong as we know you will be setting things right in an action “rogue-lite.” This could be a game that takes off as it launches around the time Steam Deck consoles are expected to start hitting consumers’ homes.

Heavily inspired by SNES-era action RPGs, Last Moon will be coming to PC at some point in 2022. In conjunction with a top-down style camera, Last Moon has beautiful hand-drawn art. The trailer above shows off some solid combat. Along with fantastic Chiptune music. The studio’s official website does mention a release on consoles. With a two year delay, we hope to finally play Last Moon this year. The top-down camera and light GPU usage could make this a fantastic Steam Deck game in 2022.

Loot River is coming to Xbox consoles and PC as part of the ID@Xbox program in 2022. The small team in Slovakia hopes to hit big with an Xbox indie darling. Loot River was featured in just about every major indie showcase in 2021, so it is getting a lot of support. In Loot River you will traverse procedurally generated shifting dungeons with a roguelike loop. The dark fantasy setting creates a unique tone. Yet the isometric gameplay will feel familiar to fans of games like Moonlighter and Enter the Gungeon.

This time it is personal. Moss: Book II launches on PSVR this spring. It is unclear if and when it will launch on other VR platforms. Yet, knowing developer Polyarc, Moss: Book II will most likely be coming to major VR platforms with a vengeance the months following. In the sequel, you return as Quill, the adorable mouse in a new hack and slash adventure. The original Moss game is considered to be one of the greatest VR/AR platformers ever made. It was nominated for over 30 awards including D.I.C.E and GDC.

No Place for Bravery

No Place for Bravery will be coming to the Nintendo Switch and PC in 2022. Developed by the small team Glitch Factory out of Brazil. NPfB is a top-down action RPG with super smooth, colorful pixelated visuals. The art direction and combat look fantastic. Plus it seems like this may be one of the few small indie games with a strong narrative. In NPfB, you will hunt for clues tied to the disappearance of your daughter. Along for the ride, your lone companion is your disabled foster son.

Nobody Saves the World

One of the more ambitious indie games of 2022, Nobody Saves the World is being developed by Drinkbox Studios, the creators of the Guacamelee! series. Known for their work with PlayStation, Nobody Saves the World will be an Xbox console exclusive this go around. In addition to a PC release, it is not clear if that is a timed console exclusive, or if Xbox has purchased the game outright.

The studio hopes to release the game in early 2022, following a delay out of August 2021. When it does eventually launch, it should be an amusing time. The art direction and narrative promise a charming and jovial experience.

Reggie, His Cousin, Two Scientists and Most Likely the End of the World

We all have that cousin, always involved in a situation. Reggie, His Cousin, Two Scientists, and Most Likely the End of the World brings that experience to PC and consoles in 2022. The 2.5D platformer carries a sense of humor that fans of games like Earthworm Jim will appreciate. With a title like this, the story should deliver a ride, especially given that the developers have created over an hour of cutscenes. As for gameplay, Reggie has the ability to combo attacks along with a weaponized gravity system. Hopefully, the team can pull it off, as this sounds like quite the time with included local co-op.

As a follow-up to the 2018 beloved indie hit The Messenger, Sabotage Studio looks to self publish a prequel. This time around Sea of Stars will take a completely different approach to gameplay. Unlike their previous action game, Sea of Stars will be a turn-based RPG. Coming to Steam and consoles in 2022, it is already clear Sea of Stars will be able to live up to the hype. As composer Yasunori Mitsuda is working on the score. His previous work includes Chrono Trigger, and Xenoblade 2. Not to mention, the artwork is stunning. After playing The Messenger we believe in this studio and buy the hype.

Somerville got an invite to the big stage this past year during The Game Awards and Xbox’s E3 event. That is because the team behind Somerville comes from PlayDead, the creators of beloved games Inside and Limbo. The newly founded team is now operating under the name Jumpship. While they have a new name, fans of their previous work will feel right at home with Somerville.

Like their past games, Somerville is a 3rd person adventure game with subtle narrative queues and platform elements. Somerville could be one of the most intriguing indie games of 2022 if the team can stick the landing. This time around their game will be Xbox console exclusive as Xbox is publishing Somerville. This makes us think about the potential of Game Pass and XCloud for this smaller experience.

To be completely honest, we have no idea if Stray is going to be any good. Publisher Annapurna Interactive has released two trailers but this is the first game from the small team of five working on Stray. That has not wavered our interest because it looks gorgeous. Not to mention the premise of a post-apocalyptic cat adventure game is fresh and hilarious. The second Stray trailer above did give us a gameplay walkthrough, which was reassuring, to say the least. We can not wait to hear more about Stray this year.

Terra Nil is a … to quote the publisher, “reverse city builder about ecosystem reconstruction. Turn a barren wasteland into an ecological paradise complete with different flora and fauna. Then clean up, leaving the environment pristine. Subverting the builder genre, Terra Nil is about the restoration of a ravaged environment.” Another game we played as part of last year’s Steam Summer Fest, Terra Nil is a tranquil drive into the simulation genre. While there is no mention of a console version we imagine Terra Nil as the perfect Steam Deck game in 2022.

Teenage Mutant Ninja Turtles: Shredder’s Revenge is not only one of our most anticipated indie games of 2022, it is one of our most anticipated overall games in 2022. Shredder’s Revenge is in good hands with publisher DotEmu, their previous work includes 2020’s Streets of Rage 4. That and the game looks fantastic from the few trailers that were shown last year. The art style perfectly captures the 1987 animated series and the games that followed. The four-player co-op is going to make this a must play with friends in 2022.

Following a delay out of 2021, Tunic will now release on March 16th, 2022. When it launches it will hit Xbox consoles and PC as a timed exclusive. There is no word on if and when it will hit Switch or PlayStation as of writing. At first glance, Tunic resembles 2021’s indie darling Death’s Door. With that, SNES era Zelda fans now have a lot to play on Xbox at an indie level.

In 2021 we had the chance to go hands-on with Weird West. The isometric immersive sim will bring a fresh take to the United States western frontier. Weird West follows the stories of five protagonists. Each character has their own background and motivation that kickstarts their adventure. From our preview, you play a former bounty hunter that has settled down to domestic life. Until one day your husband is kidnapped. She’s forced to dig up her old bounty hunting equipment and follow the trail to find her husband. Along the way, fans of Arkane Studio’s work will immediately notice their influence on Weird West. Thank you to LOGNET Editor Mahmood Ghaffar, you can read the rest of his preview here.

We can not wait to get sweaty in Windjammers 2. Nothing gets us more excited than 80’s vibes and Xbox Game Pass. That is correct, Windjammers 2 is going to be jamming on Xbox Game Pass day one. If Game Pass is not your platform of choice, do not worry. Windjammers 2 will be launching on Stadia, PS4, PS5, Xbox One, Nintendo Switch, and PC on January 20th. The sequel promises a fair amount of new content including an all-new Arcade Mode. In addition to brand new characters and stages.

Wizard With A Gun

Devolver. Wizards. Guns. We are sold, say no more. Wizard With A Gun is coming to the Nintendo Switch and PC in 2022. Publisher Devolver describes the game as, “an online cooperative sandbox survival game set in a magical wilderness wrought with dangerous creatures and arcane mysteries. Embark on a journey alone or with friends to collect, craft, and outfit your wizard however you see fit as you explore the unknown. Carefully design weapons, bullets, and furnishings for your tower home but try not to burn it all down as the magic you wield escalates beyond your control.”