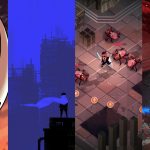 You are reading
Indie Games To Watch In 2021

Every year we are fortunate enough to get games like Untitled Goose Game, Minit, and Celeste. Games that are low budget passion projects. Or games created in mom’s basement at night over half a decade. Small teams with smaller budgets working in every corner of the globe, not to get rich but, to just do what they love.

Every year some of these games become our more memorable games of the year. It is going to kill us not to be out there with these developers this year at trade shows. Yet, we promise to keep the passion flowing for these games all year. With that, we have compiled our early list of Indie Games to Watch in 2021.

Top-down action RPG The Ascent was first shown during the 2020 Xbox Series partner event back in May. A small Swedish studio of 11 people at Neon Giant is taking a first big step with an Xbox Game Pass title. Early builds of the game showcase beautiful lighting in a post-apocalyptic 4K 60FPS Cyberpunk city. The gunplay is visually stunning. Which is a twin-stick shooting style with a cover system. Plus, you can play up to four-player co-op locally or online. The Xbox Series showcase makes this one of the best Indie games to watch in 2021.

Boyfriend Dungeon will be coming to Switch and PC in 2021. While the game appears to lean on satire, let me tell you, this game is no joke. I was lucky enough to play Boyfriend Dungeon at PAX East and it is a fantastic Dungeon Crawler-Dating Sim mash-up. You will discover loot you can take out on dates. Do not let the name fool you – you can take on dates of any gender as well as non-binary. Including a cat, if you prefer not to take it to the next level. Boyfriend Dungeon speaks to an audience that rarely gets spoken to. It seems like it could be a fantastic game to stream as well. If Boyfriend Dungeon lives up to its first impression it could be the indie keeper of 2021.

Tunche’s adventure began on Kickstarter in 2018 but it will continue on all major platforms when it launches in 2021. Tunche has beautiful hand-drawn art that bursts with action. It is a co-op adventure game that takes place in a Peruvian setting. Tunche was a nice addition to last summer’s Steam Game Festival. I had a chance to play it, and while I can not speak of how deep the game is, what I did get to play was fun.

It seems like a few times a year now, we get a new indie Metroidvania. HAAK finds a way to stand out with his impressive visuals and art direction. You can pick up the game in early access now. However, it will be officially released for the Nintendo Switch and PC in 2021. The early access review scores are very positive. HAAK might find a way to break through and stand out on the eShop storefront if the team can match these reviews when it launches later this year.

In Bear & Breakfast, you will manage, build, and customize a Bed and Breakfast as Hank, a bear. The small team in Romania, Gummy Cat, received a huge boost when Nintendo featured their game as part of their 2020 Summer Indie World Showcase. Alongside the Switch, Bear & Breakfast will release on Steam. While there is a story and lore to the game, the main mechanic is based around base building and maintaining the reputation of the B&B.

Indie darling Yacht Club Games has partnered with Finnish developer Mechanical Head Studios to publish their retro stylized Metroidvania. Cyber Shadow is out this week on nearly all platforms and it has everything you would come to expect from Yacht Club.

You can download it on Game Pass and play today. The music is fantastic and the mechanics are solid. This game has everything it needs to stick around all year and pop up on some of those GOTY lists. Keep this on your list as one of the Indie games to watch in 2021.

The early trailers of SkateBIRD radiate vibes of Tony Hawk’s Pro Skater ASMR. The gameplay is complemented by a level design similar to Dreamcast classic Toy Commander.  SkateBIRD will be out on Switch, PC, and Xbox later this year.

This should be great news to those eagerly awaiting the game’s two-year-old Kickstarter campaign. As for the game’s campaign, you will be able to unlock some very funny hats as you skate through some side stories now that SkateBIRD has passed its seventh stretch goal.

Much like Untitled Goose Game, sometimes a successful indie game just needs to be a simple jolly time. Often, we all just need a break from shooting, murdering, and post-apocalyptic future universes. Turnip Boy Commits Tax Evasion looks like it can be a well-deserved break we are all going to need.

“Take control of an adorable turnip who happens to be an absolute menace to society. After failing to pay taxes and getting evicted from your home, you must go on an epic quest to pay back your massive debt to Mayor Onion.”

TBCTE will be coming to Switch and PC this year.

While Kena is receiving some sort of boost from PlayStation, it will be developed and self-published by the small team at Ember Lab. It’s almost concerning how much hype has been drummed up after the games announcement trailer alongside the PS5 reveal event. Kena comes from a team led by two brothers leaving behind the world of movie and trailer animation to create their first video game. What they have been able to create is reminiscent of a 00’s era Zelda game. Not to mention, the game has the charm of a modern Pixar movie with lots of action. Kena could be a mega-hit for PlayStation. A great reason to keep it on your radar as one of the Indie games to watch in 2021.

After Hollow Knight came out in 2018, the side-scrolling Metroidvania went on to become an award-winning hit. The highly anticipated follow-up Hollow Knight: Silksong will be out on Switch and PC this year. The sequel will have new crafting features in addition to over 150 new enemies. The small team down in Australia should be making news soon on their self-published game. The two year anniversary of the game’s announcement is coming up this February.

In Gamedec, you will play a detective that solves crimes in a virtual cyberpunk world. It is an isometric single-player RPG with pen and paper elements. The Polish developed game will release this year for Switch and PC. Developer Anshar Studios will also be self-publishing the game. Some of the previous games they have worked on include Boulders Gate, Divinity: Original Sin 2, and Dead by Daylight. Gamedec looks fantastic on PC, which instantly makes me think the Switch version could be a great candidate for a potential 4K Switch “Pro” model in 2021.