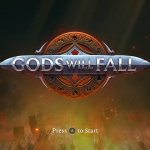 You are reading
Gods Will Fall Review

Gods Will Fall has been unleashed on the Xbox One. This mixture of Pikmin/hack-n-slash is set on an island full of gods looking to end your warriors’ lives before you can end theirs.  With most games, the difficulty level is something that you control. Here the gods set that difficulty level, in a rather nice bit of metaphor. One minute, you may feel like the best player in the world. The next, you are drowning in sorrow after those same gods have killed all squad. Gods Will Fall is not a game for those that can not stand losing. It is a grind like nothing you have experienced before.

Gods Will Fall opens with hundreds of warriors setting sail to defeat the ten gods of the land who have been, well, destroying their lives. Things do not exactly go according to plan and what began as an army ends with a mere eight warriors surviving the gods’ wrath. While an army could have easily taken these gods down, your small band of survivors have a tougher uphill battle ahead of them. A battle that most will not be fully able to complete in the first few playthroughs. Each dungeon has a unique difficulty rating which changes along with the enemies each time you start a playthrough. It keeps you from becoming complacent as you play.

Developer Clever Beans provides a personal stake for each of the surviving warriors. Each has a different connection to one of the gods. Some will see this quest as an opportunity to gain retribution for past pain caused to their family. Others will see the doors to the dungeons as a part of the nightmares that have kept them awake at night. For their part, the gods do nothing to sway you from your course. Some will even taunt you as you show up to murder them. The story will get you to the door, but the gameplay will shove you through it. 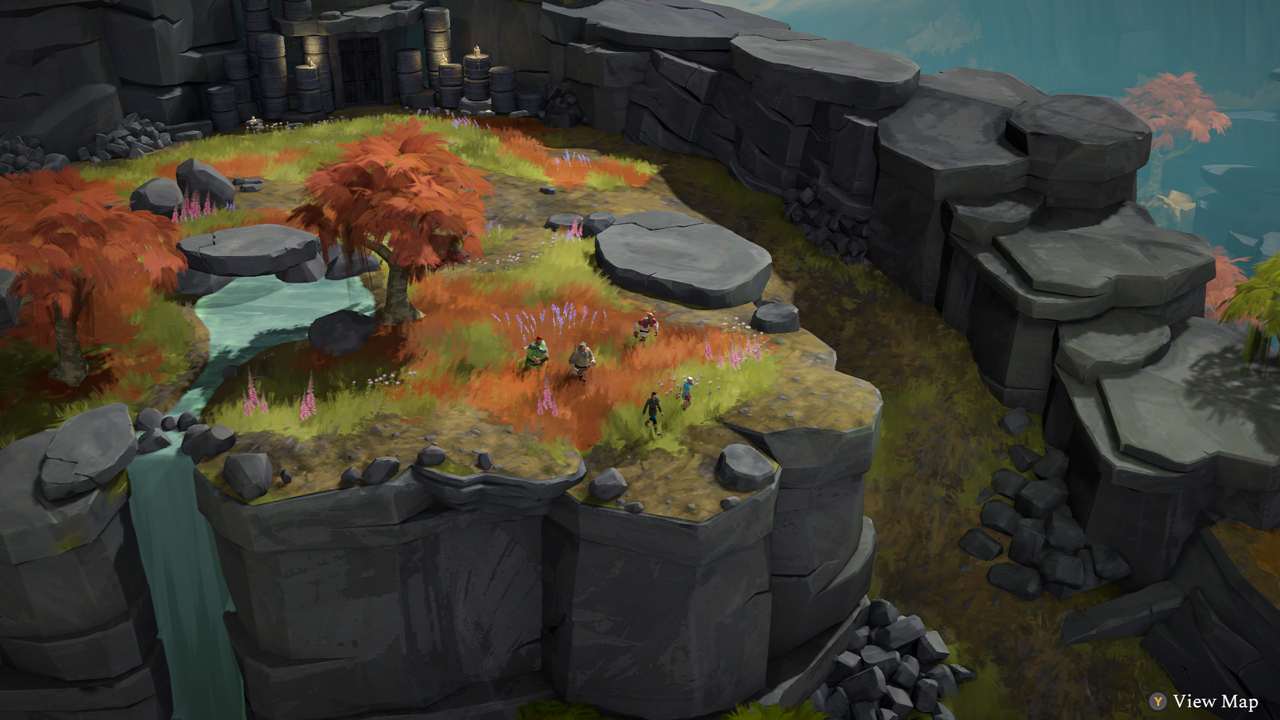 The game comes with a rather unique control scheme. While you are walking around the overworld, you control all eight warriors. This changes when you enter a dungeon where only one warrior at a time will be allowed to enter. Gods Will Fall has fairly simple controls, standard light and heavy attack, and a parry that allows you to throw your enemies. The quick timing on the parry is quite finicky and I found it to be fairly difficult to master. Warriors are given various weapons that include swords, axes, and mallets. Each weapon has a level of damage; this level of damage depends if you were able to upgrade a weapon in a dungeon or if you had it when the game started.

One thing I appreciated was that Gods Will Fall allows you to play each dungeon with a fresh start. Each dungeon has its own randomly assigned difficulty that changes between runs. This keeps you on your toes since gods who I had no problem defeating in one run can be absolutely confidence destroying in the next. Each play through you will be given a random set of warriors with various stat proficiencies such as health, speed and size.

Some of these rolls just did not work for me. For instance, I had a group of larger, slower warriors that just could not survive in a dungeon. Their attack was too slow to keep up with the enemies in the dungeon and were easily slaughtered. This really was the most frustrating part of my time playing, you never really knew if you were getting a good group. Warriors will either be stuck in a dungeon until they can be rescued or will perish.  Losing your whole squad ends the run so it became a game of chess when you start losing some of your better warriors. I did not want to risk my best in battle, but without using them you will never succeed. 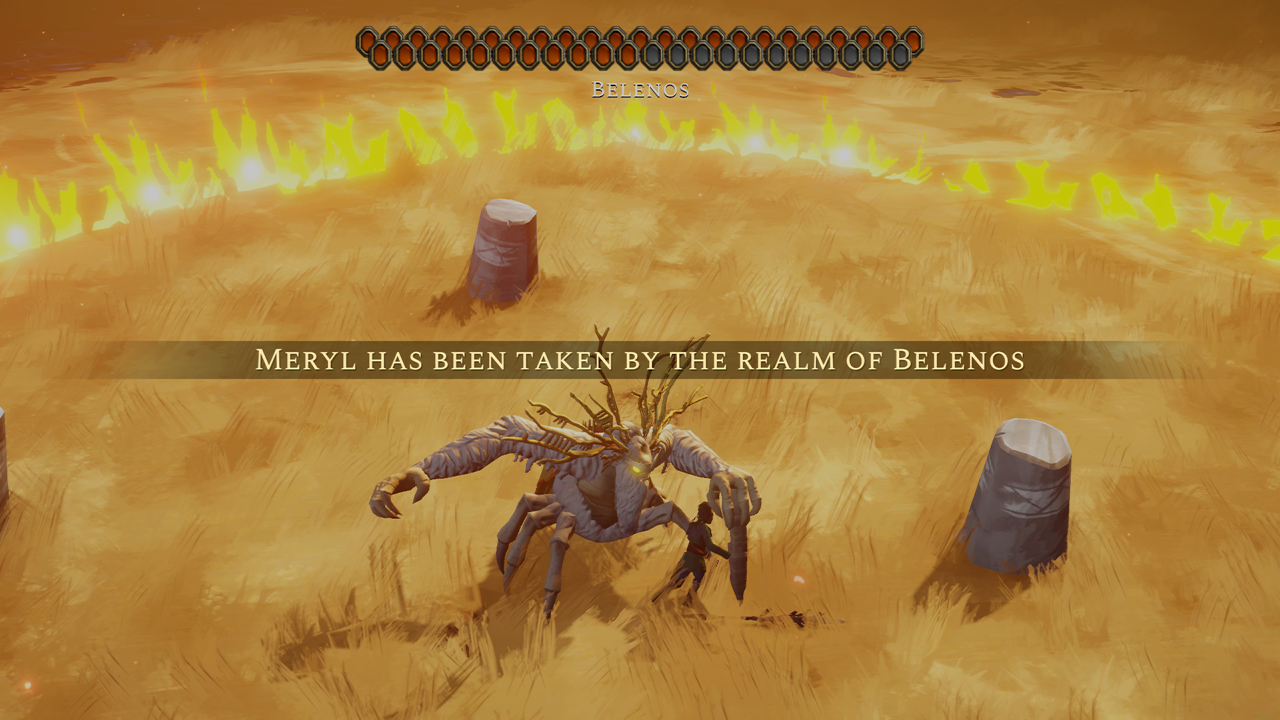 The Sound of Victory

This soundtrack is a refreshing bit of audio and the chosen suite is befitting the epic nature of Gods Will Fall. It was strongly reminiscent of the Vikings soundtrack, and that is meant in the best way. It is a melodic journey into the world of gods. This music can keep you in good spirits as you attempt to clear a dungeon. It can also turn on you within a few seconds imparting a sense of dread at the worst moment. There is no spoken English, but there are subtitles available instead, everything is spoken in a Celtic tongue . It blends in with the beautiful world that has been created. This gave a certain level of authenticity that we do not often see in games.

Gods Will Fall is a visually stunning game in its own way. Upon landing on the island, I was greeted to swaying flowers and grass that gave me Ghost of Tsushima or Legend of Zelda: Breath of the Wild feels. Many dungeon crawlers have a tendency to feel same-y with blocky armor and generic backgrounds. It was one of the reasons why Hades stood out and Gods Will Fall does as well. It is not a matter of polygons as much as it is style. The over world that houses the dungeons is just beautiful. From the high peaks to the sands of the beach, the map feels like it has its own life. This hand-painted look adds to the overall dichotomy of the world. After all, how can something so beautiful hold so many terrible things?

See More: Hitman 3: What I Always Wanted from Assassin’s Creed

Each of those terrible things resides in a dungeon complete with its own style, and I would be remiss if I did not mention a couple of them. The Morrigan resides in the dungeon that used to keep her captive before she destroyed her jailer. While Boadannu’s is a cove full of wrecked ships. You visually always know where you are, which is important in a stylized game.  I would point out though that I had some issues with the Carnoccus dungeon. The pathing to entrance is poorly laid out making it difficult to find.

Exploration Is Its Own Reward

Each dungeon has to be explored to understand how to beat its patron god. The gods have predictable attack patterns once you learn them; however, by exploring the dungeons you are better able to beat them. The Morrigan for instance will throw knives and then open up her wings to show off her stomach.  What made the fight easy though was finding the forge to buff my sword to make it stronger in her dungeon. Additionally, some of the dungeons have objects that, once they are destroyed, will cause damage to the god before you fight them. Carnoccus has a set of horns, stone fingers, and a large berry that can be destroyed. This took his health down to about half of what it would have been before the fight even started. 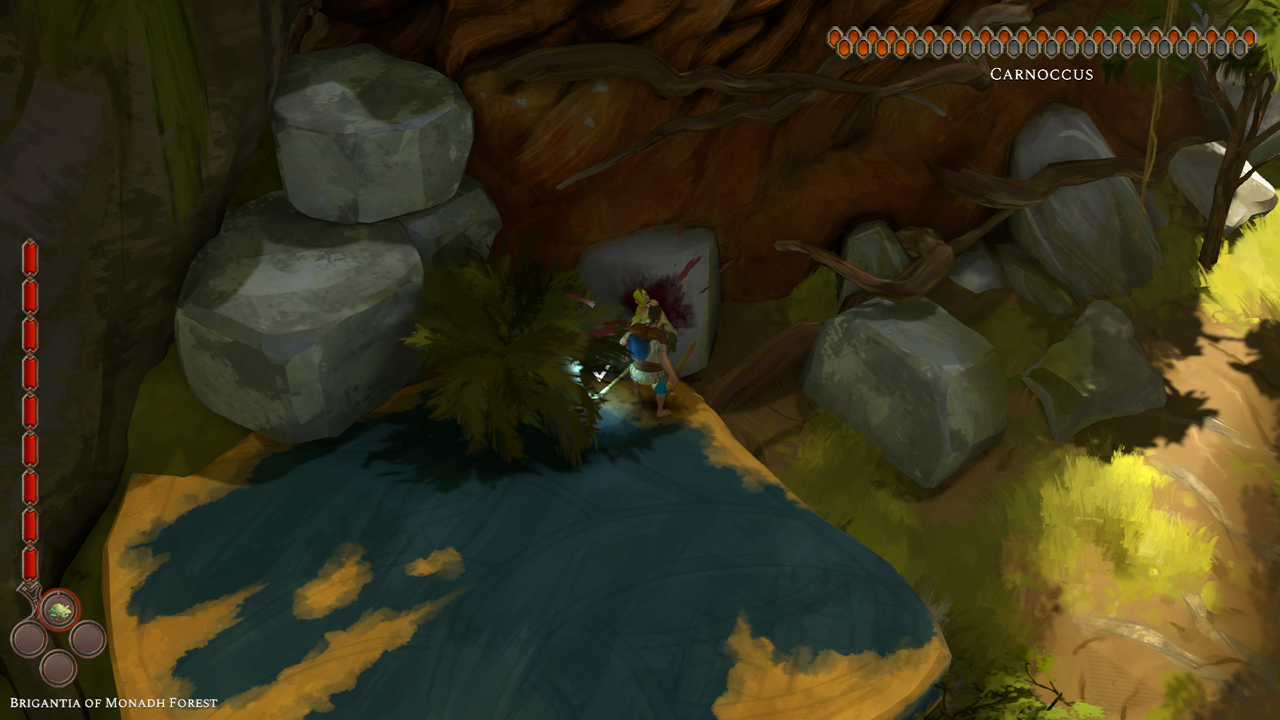 Despite losing many warriors to these gods, I rarely felt frustrated. It only caused a need to play more, a feeling that fans of From Software games will be intimately familiar with. With so many games being released it really is easy to overlook a game like this. Personally, I can’t wait to see what Clever Beans does with this game. Hopefully, more content will be added throughout the year. I know that even after I was done with this review, I kept spending time with the game. I can not wait to go back throughout the year.

Review code for this game was provided by Deep Silver.