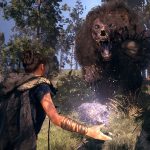 2021 was a hard year for game releases, as many publishers had to delay highly anticipated games. As COVID-19 continued to make development challenging, especially for studios that relied heavily on motion capture during development. While 2022 has been action-packed so far, with big releases such as Elden Ring and Horizon Forbidden West as well as compelling Indie titles such as Sifu. While there is no shortage of games to play currently, there will still be some games that will inevitably get delayed throughout 2022. It looks like Forspoken is the next AAA game that has had to adjust its release date.

Forspoken Will Miss May

Today, in a post from the official Forspoken Twitter account it was revealed that the game will not be launching on its original May release date. Luminous Productions the studio behind the upcoming action RPG cited that they simply needed more time to polish the game. Stating “Our vision for this exciting new IP is to deliver a game world and hero that gamers across the globe will want to experience for years to come, so getting it right is extremely important to us.” With this in mind, the game will now launch on October 11, 2022, on PS5 and PC.

With so many games suffering from bugs and technical issues at launch, it is hard to deny that a developer taking more time to polish their game is a bad thing. As excited as fans may be to get their hands on this upcoming release, October isn’t that far away. Hopefully, we will see an update from the developers in the coming months, maybe even some new gameplay.

A message from the #Forspoken Development Team. pic.twitter.com/T302V6h4Np

Are you excited about Forspoken? Let us know in the comments and don’t forget to check back for the latest gaming news and information.