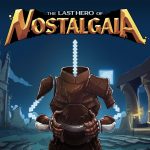 You are reading
PAX East 2022: The Last Hero of Nostalgaia

The Last Hero of Nostalgaia (Noss-Tal-Guy-Ya) is unapologetically a Souls game. No, it is not a Souls-like indie game or a smaller game with Souls elements. The Last Hero of Nostalgaia is nearly identical to Dark Souls and Demon’s Souls in so many ways. In contrast, the major difference is the game’s art direction and narrative. We have a hands-on preview from PAX East 2022.

In The Last Hero of Nostalgaia, you play as a pixelated stick figure. A disease has burned through a village, turning its villagers into pixelated art assets. Unlike games by FromSoftware, at no point does this take itself too seriously. I found myself laughing through my entire half-hour playthrough. There are references to other games all over that add a comedic element to the narrative. For example, you pick up green herbs for healing, a nod to Resident Evil.

As for the gameplay, it is very much like Demon’s Souls, except the combat is a little more forgiving and moves a little faster. The balance felt perfect and as someone who has struggled through Souls games for 100s of hours, I prefer what the small indie team has done here. Watch the video above for an exclusive look at the opening area of the game, including the first boss battle.

The Last Hero of Nostalgaia releases in 2022 exclusively on Xbox and PC. The small indie game is a ton of fun and is one of the best indie takes on the Souls genre that I have ever played. Additionally, the layers of humor and fast-paced combat, make this one of the most accessible Souls games ever.