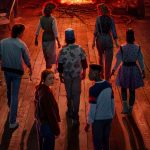 You are reading
Stranger Things Season Four Trailer is Here

A final trailer for the fourth season of Stranger Things arrived earlier today. It shows so many wonderful things that our crew of misfits will have to go up against. If you’re like me, this isn’t the first time you’ve watched the trailer.

As you can see and hear in the trailer below everything is not ok. The group has tried to live a normal life after the events of season three. It seems though that forces from the other side are pulling everyone back together to finish a war. Take a few moments to watch or rewatch the trailer below.

Fans won’t have to wait that much longer for this season. May 27th will be the release date for the first part of Stranger Things Season 4. It will be interesting to see what kind of cliffhanger we get before part two which will release on July 1st. As of now, the talk is that the fifth season will be able to bring everything together for a satisfying ending.

Of course, you do need a subscription to Netflix to watch. With the release date as it is you have plenty of time to go back through the first three seasons to catch up. Also, you can go and check out some of the many books and graphic novels that give fans a little more to the story. By the way, that mystery man at the end of the trailer is named Vecna.

his name is Vecna. #strangerthings4 pic.twitter.com/kj53VxeOzt

This show takes so many of its creatures from Dungeons and Dragons. Which helps keep the show somewhat grounded for what it is. This Lich character should hopefully have some connection to the real world that the kids live in. Take a moment to bookmark Lordsofgaming.net for all your gaming and entertainment news.