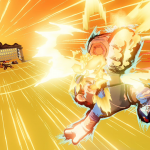 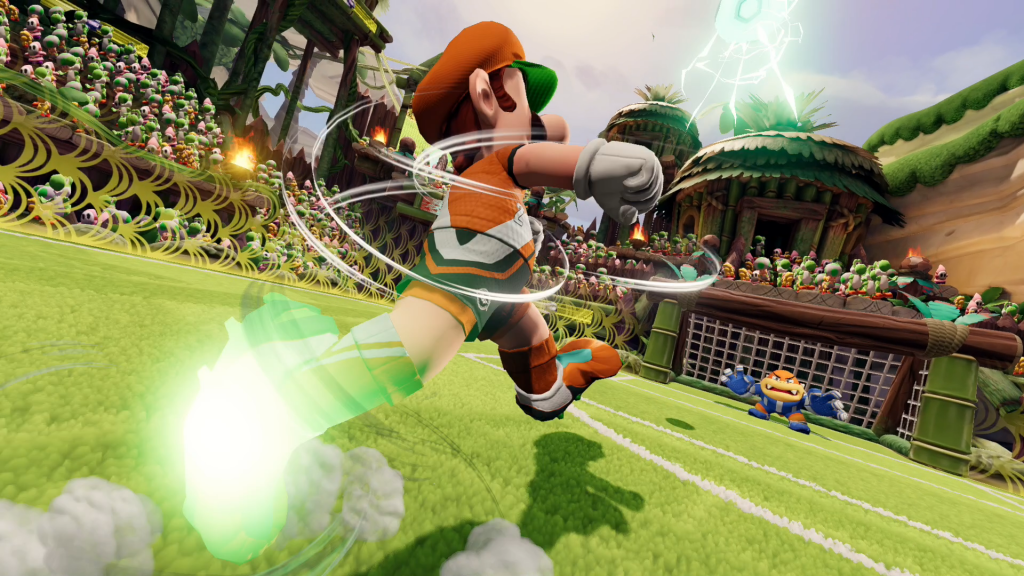 Nintendo released a timed demo for Mario Strikers: Battle League called First Kick. The demo is available from June 3rd, 2022 through June 5th, 2022. I’ve been looking forward to playing Nintendo’s latest Mario soccer game and this demo served as the perfect teaser. Featuring myriad tutorials and online quick-play, the demo effectively teaches you how to play. You’re allowed to team up and face opponents on the pitch. You can check out the character customization options as well. But I was unable to begin equipping new pieces of gear for my favorite characters. Here are my impressions of Mario Strikers: Battle League First Kick!

Mr. Fútbot, Teach Me Your Ways

Mario Strikers: Battle League First Kick provides an opportunity to learn the basics from a friendly robot named Fútbot. In this series of tutorials, you’ll learn everything from basic movement and shooting to advanced techniques.

You’re given a chance to practice the moves without resistance a number of times. But then a handful of AI opponents enter the field for you to try out your new techniques. Some of the more advanced techniques weren’t as easy to pull off against opponents. The learning curve for advanced techniques will likely separate the skilled players from the novices.

I completed all the tutorials before jumping into online play, but Mario Strikers: Battle League First Kick does allow you to skip them entirely and dive head first into online Quick Play matches. I found the tutorials to help with understanding just how many tools I have to use on the field, but found implementing them to require plenty of practice. But you know what they say about practice! 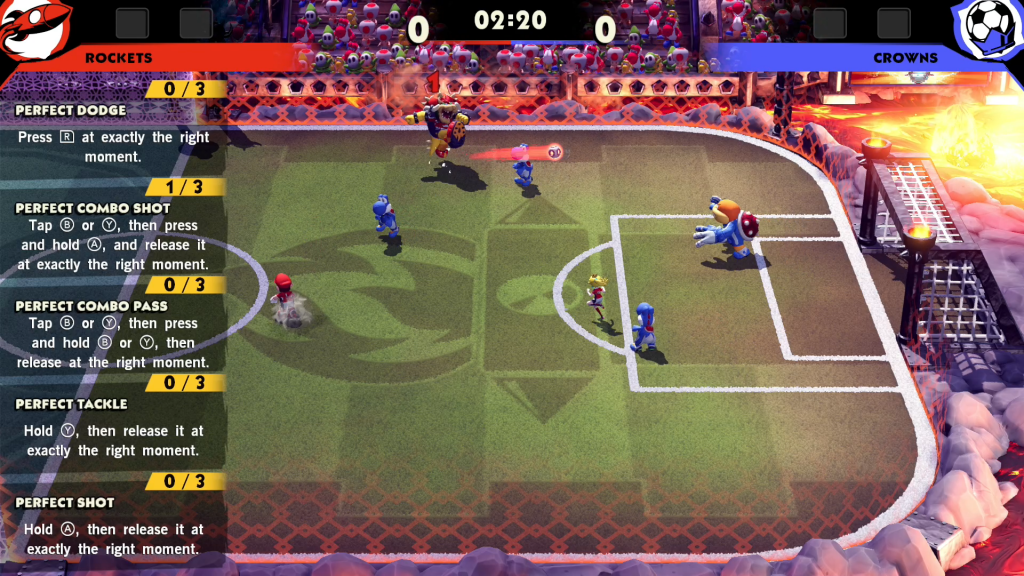 When starting a search for an online Quick Play match, you’ll first be matched with a teammate. What I found to be a pleasant surprise is that you’re able to have a friend join you for couch co-op, and you’ll still be paired with another teammate. Sometimes, they too have a friend playing with them and the four of you can face the opponents together. Once you’re paired with a teammate, you’re matched with some opponents and the match begins.

Matchmaking didn’t take long at all, in my experience. I did have a teammate quit out after we were matched, but the game returned me to the teammate matching screen instead of forcing me to play against a team of people by myself.

While playing, I had enjoyed trying to land Hyper Strikes and tackles. Scoring against actual players feels earned and exciting. Additionally, tackling opponents and pushing them into the electric fence feels incredibly satisfying. Everything ran smoothly and I didn’t notice any major connectivity issues while playing.

However, I noticed some ping issues when a non-local player was launching a Hyper Strike. The meter pops up and the player has to time their button presses to maximize the power of the shot. I saw the cursor pass the optimal zone for a button press, but then a moment later, it displayed that the player had actually timed it just right. Outside of that, the experience was rock solid and I had a lot of fun playing against others. 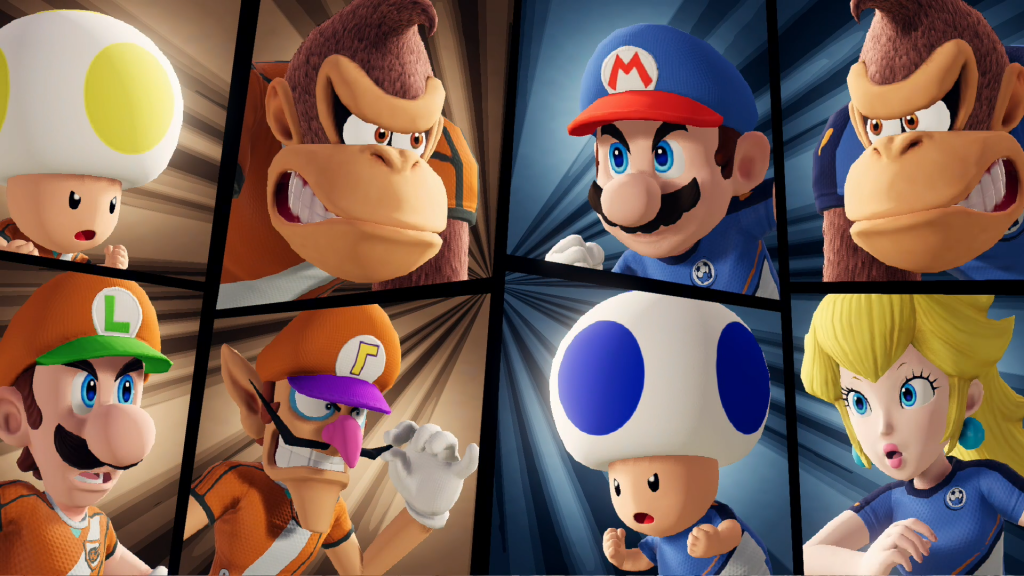 In the main menu, you can access the screen that allows you to equip characters with new gear to boost/nerf their statistics. There’s a currency required to purchase new equipment, but unfortunately, I did not earn any. I was unable to make any purchases but I believe the same can be said for all players of the demo. I’m not sure if this feature isn’t available in the demo, but I didn’t notice any other players with new equipment while playing online. My guess is that this feature is just being teased and will be available at launch.

However, I think the customization will create a metagame for maximizing teams. It makes me wonder if players will quickly figure out the best team and then you’ll only ever find the same characters on the field. Players that just want to pick their favorite Nintendo character might learn that their favorite “isn’t good” and that’s always a bummer. But I suppose we’ll just have to wait and see. 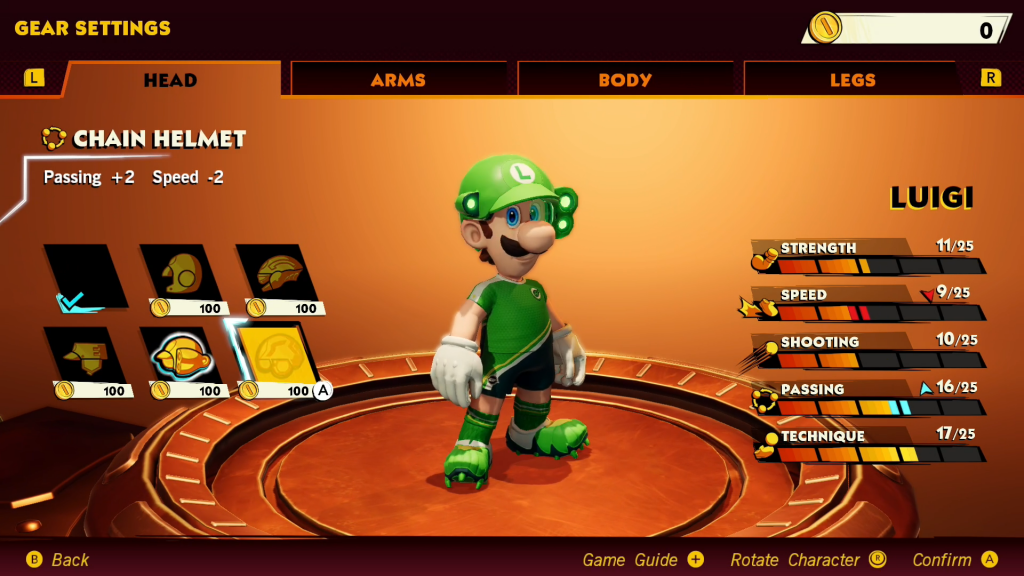 Mario Strikers: Battle League First Kick is only a demo, but it’s a lot of fun and I think the finished product will be ready for launch. Unfortunately, my fears of this game being a little bare-bones were only solidified by this demo. From a gameplay perspective, it’s all there and is quite competent. Mastering the gameplay and watching masters play will be equally fun, but everything surrounding the gameplay has me a bit worried.

Mainly, there doesn’t seem to be any sort of story-based mode in the game. This leads me to believe players will only be able to play quick matches against AI, friends locally, and online. That might be fine for some, but personally, that makes me want to wait for the game to go on sale before purchasing.

I honestly can’t believe I’m about to say it, but Mario Strikers: Battle League feels like a game that is better suited for a free-to-play model. Free-to-play would help fill the servers with players and would justify the purely multiplayer aspects of the game. I could be wrong and there could be even a simple single-player tournament-style campaign. But the impression I got from the demo, considering there are visible game modes that are inaccessible, is that there won’t be one, and that kind of stinks.

Performance-wise, the game ran great (albeit at 30 frames per second). I mostly played with my Switch docked, but the demo ran equally well in handheld mode. Dynamic resolution implementation is likely used, but I’m no Digital Foundry, so what do I know?

Have you played the Mario Strikers: Battle League First Kick demo? What do you think? Will you be buying the game at launch? Let us know in the comments below! 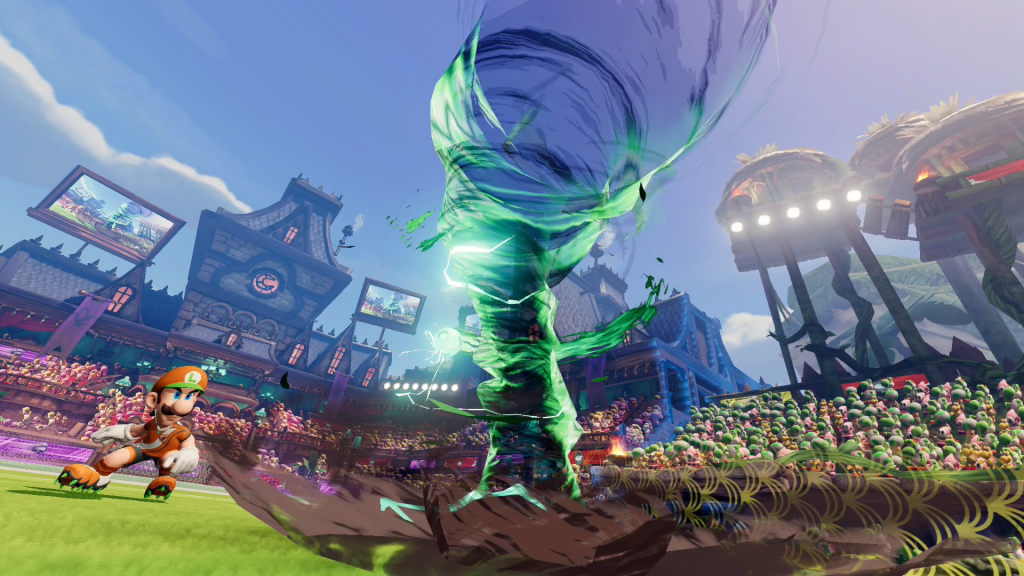