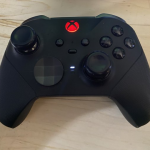 It has become quite common in recent years that gaming hardware leaks well ahead of its official release. In a world of social media, it’s becoming more and more difficult to keep games and hardware hidden for long. This even happened with the Xbox Series controllers that were being shown off by retail employees in pictures and videos before the official reveal. This appears to be happening again as a white variation of the Xbox Elite Series 2 controller has appeared in a video online with a full unboxing breakdown.

Originally shared by Twitter user Rebs Gaming a video unboxing of a white Xbox Elite Series 2 controller was uploaded to a brand new Youtube channel. This is the channel’s only upload and interestingly enough this video is actually not that new as it was uploaded 3 weeks ago. This isn’t the first time the white variation of the Xbox Elite Series 2 controller was seen, however. As in March leaked photos of the controller at retailers began popping up on Reddit and were even reported on by some major sites. This tear-down gives us an in-depth look of the controller in its gleaming white color and contrasted by its dark black grips. With this controller being shared a couple of separate times now it feels like an announcement is inevitable. Perhaps during Gamescom later this month we will get an official reveal of the white Xbox Elite Series 2 controller. We won’t have much longer to wait if it does end up being a reveal at Gamescom which kicks off on August 23rd.

Will you be purchasing a new Elite controller? Let us know in the comments and don’t forget to check back for the latest gaming news and information.