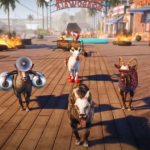 You are reading
Goat Simulator 3 Gets Ridiculous New Trailer

Gamescom 2022 Opening Night Live is an event packed with new trailers, information, and release dates from the biggest upcoming games. From big AAAs to impressive Indie titles, there is almost something for everyone at Gamescom 2022.

Today, we got a new look at Goat Simulator 3 which is the sequel to the hugely successful physics simulator from 2014. With a wealth of hilarious and straight-up ridiculous humor ahead. It looks like the third game, which is actually the 2nd game is going to be a blast later this year.

Did you like the original Goat Simulator? Then you're going to love Goat Simulator 3, a game with absolutley no recycled mechanics whatsoever! Pre-order now to join in the fun on November 17th 🐐 #GoatSimulator3 https://t.co/3gB9z44tgf pic.twitter.com/pq2kxD7ne3

Goat Simulator 3 will be launching on PC, Xbox Series, and PlayStation 5 on November 17th, 2022. Here is a brief synopsis of the game from the Epic Game store page.

“Come and discover Goat Simulator 3, the latest sandbox game of farm life, ultra-realistic, which puts you in the shoes of your favorite biquette.
Yes, we did! The Bêêê coefficient has been raised, and other goats are joining Pilgor. You can invite up to three friends locally or online, do a team carnage, or compete in mini-games and cut your friendship to pieces.
Be prepared for it to go from bad to worse… Lick, headbutt, and horn everything that bothers you in a new open world! Waste of time guaranteed, it’s the best of the worst since Goat Simulator! We will not tell you how to play (except in the tutorial), but know that you can become the goat of your dreams.”
Will you be exploring the world as a goat? Let us know in the comments and don’t forget to check back for the latest gaming news and information.
Facebook Twitter Google+ LinkedIn Pinterest Tumblr
Previous article PlayStation DualSense Edge Revealed at Gamescom 2022
Next article Gamescom 2022: Under The Waves Revealed